Chris Hoare Documented How Bristol Stayed Sane in the Pandemic 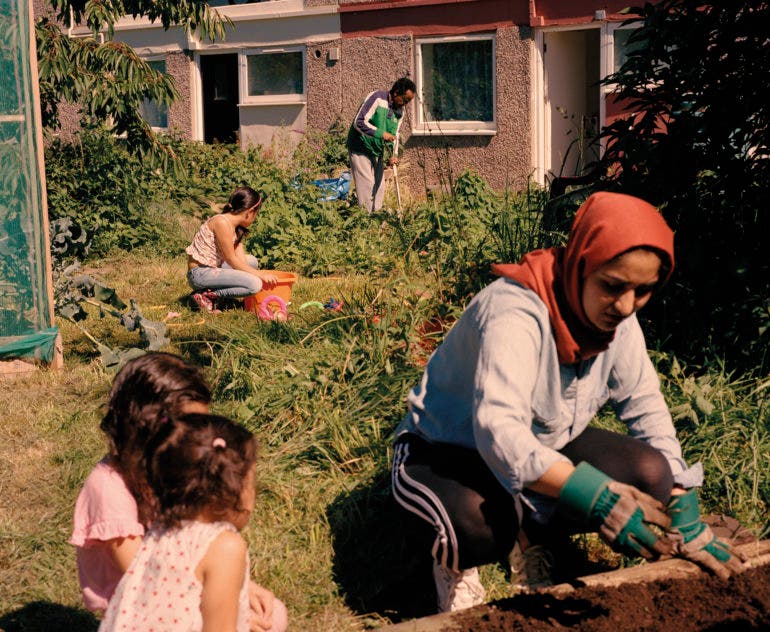 All images by Chris Hoare. Used with permission

“I hope my pictures in some way seduce people into these spaces”, says Chris Hoare about his latest project. Growing Spaces was conceptualized as an idea before the Covid-19 pandemic but had to be completely done under the UK lockdown restrictions. This unexpected turn of events coincided with an upsurge in public requirements for open gardening allotments, which greatly aided this photo documentary.

These images were taken between April and November of last year, at the height of the lockdowns in the UK. A system that originated in the 19th century, the demand for allotments have increased in popularity since the 2020 lockdown. More individuals and families have been turning to gardening to escape the drudgery of the ongoing pandemic. Such fertile spaces allow residents of the areas to grow their own produce at their own pace. These plots also became a sanctuary of sorts, as they were one of the few areas that people were allowed to visit during the lockdown. Many had been on waitlists for years to be able to use these plots. Chris’s methodical approach to photographing the allotment goers and their projects helped him closely bond with a number of them. He’s adapted his trademark ‘speculative documentary’ style of storytelling to this project. ‘Growing Spaces‘ is also currently available to purchase as a softcover from RRB Photobooks.

“I used a Mamiya RB67 with a 127mm fixed lens, simple but heavy as you can imagine. I like the slowness and limitations of it, I also the way that camera renders the world, which for me this is quite important. For portraiture it’s great, I’ve always used waist level finder cameras and I like how this effects portraits, looking down as oppose[d] to looking at the person being photographed.

The Phoblographer: Talk to us about how you got into photography.

Chris Hoare: I found photography whilst studying art just after high school, whereby one module was being introduced to analogue processes. As cheesy or cliche as it sounds, it was sort of as soon I stepped into the darkroom I never looked back and haven’t really wanted to pursue a different career since.

The Phoblographer: I believe this photo project was conceptualized before the Covid-19 outbreak. Did a lot of rescheduling have to be done for working on it during the lockdowns? What was going through your mind?

Chris Hoare: The work was commissioned by Bristol Photo Festival, which is set to take place for the first time this year. Just like the festival itself, the commission was conceived before the pandemic, but as a result of it, the subject of allotments and growing gained an added layer of importance – with the sudden increase in popularity. I began making images at the beginning of April and finished in November, so it was almost entirely made throughout the lockdown restrictions. It felt important to be documenting this urge that society was having for the outdoors at such a historic moment, it was also fortunately something which was possible due to the nature of it all being outside. There were questions at the beginning of whether or not it was possible, but I decided to go with my gut and do it safely, allotments as mentioned were legally allowed to continue.

The Phoblographer: So what did you notice about the mental health of some of these folks? Were they doing this as a hobby? To survive? Did they just want to interact with other people?

Chris Hoare: It’s more than clear that gardening is good for your health and wellbeing, there was a study recently which stated all the benefits to having an allotment, which went far beyond just the physical health benefits, it noted “high levels of social and community activities, including sharing surplus food, knowledge exchange, awareness and interaction with wildlife, along with appreciation of time spent outdoors.” I’m sure all of the people featured in the work would attest to these benefits and passionately argue the case for more of these spaces. Everyone I met was reaping the rewards of choosing to spend their time growing.

The Phoblographer: Talk safety with us. What precautions did you take?

Chris Hoare: The precautions taken was me keeping a distance sensible from people, not getting too close. If it felt like a situation where a mask was required, then I would wear one, most were happy not to be wearing one, seeing as we never really got that close physically.

The Phoblographer: Were there any significant personal stories that really struck a chord with you during the duration of the project? How did you then approach those subjects as a photographer? Were there folks you just avoided altogether that you can tell us about?

Chris Hoare: Yeah, I mean there were a few special moments I guess, one that stands out in my mind was last November. It was with an elderly Jamaican women named Tina. She had lost her husband in March due to him contracting Covid-19 in a hospital, just after coming home from Jamaica. Their allotment was something they shared together for over 30 years; this year she was forced to keep on top of it herself. After having talked to Tina about her loss and then photographing her as she marked the end of the growing season with a fire, it reminded me of the circle that we are all in and how nature is ultimately in control of our destiny. I met Tina after asking someone else if I could photograph them with their fire, but they declined, Tina overheard me and invited me to come back the following day where she was planning to have one. That’s kind of how it goes, some people say no, some people say yes.

The Phoblographer: Were the inhabitants of each allotment welcoming? Were some more willing to be photographed than others and did you bond with them over the course of the project? What did they think about you putting a camera in their face, so to speak?

Chris Hoare: Almost everyone was welcoming, I just had to navigate myself in to the spaces as they are all locked and you have to know someone in order to get access. I was given the key codes a few times and then would come back to make pictures, but mostly would come to meet people there, then by just being there I would meet others. Some people I became good friends with and still go to see them at their allotment now, where it is a great place to hang out.

The Phoblographer: What was the main story you wanted to convey by photographing this series? It’s clearly documentary work, yes? So what’s the final intent of the project?

Chris Hoare: If my images enable any contemplation on the joys of outdoors green spaces and how important they are, that would be a success. I hope my pictures in some way seduce people into these spaces, I want the images to be enjoyed from an aesthetic point of view. All the evidence points to a surge in gardening during the pandemic, hopefully my book is a reminder of that time.

The Phoblographer: I enjoy the vintage film feel that the images in this series have. We’re the images shot on film or was the look added in post-processing the digital images? How do you feel that specifically adds to the feeling people get when they look at the photos?

Chris Hoare: They were shot on film yeah, whereby not much post-production was done really. I probably warmed most of them slightly, as that is the colour palette that I like. I think it helps to make the images seductive, which when you’re dealing with the natural world is a quality that matches in a nice way.

The Phoblographer: How often did you photograph each of these eleven sites? What sort of planning was involved?

Chris Hoare: I was definitely drawn to some more than others, I was always intent on trying to capture things that go against what you would expect. Such as there’s a picture of a pack of Budweiser in a pond, this was taken at the beginning of May on a beautiful Saturday and was at an allotment where I spent perhaps more time than any other. It was with a couple who have become good friends, their allotment is like an oasis in the city and an easy place to spend time, hours drift away as afternoon quickly turns into evening, usually ending with a fire or a BBQ.

The Phoblographer: Have you had your own personal allotment ever? If so, have you documented its growth and if not, would you like to have one someday?

Chris Hoare: I haven’t ever owned an allotment no, although I am now on the waiting list to get one with my girlfriend. This might take some time, as the waiting lists are at least a couple of years due [to] the popularity.

The Phoblographer: Is there any one image that you personally feel stands out the most?

Chris Hoare: Not really one in particularly, I like the way they come together in the book and I enjoy making pairings with them.

The Phoblographer: Will there be a follow up to this series in any way? Have some of the participants expressed an interest in having their spaces photographed in the future?

Chris Hoare: These past two weeks I have been photographing small farms, in and on the outskirts of the same city as part of a separate commission, this has conveniently turned in to an extension of the project. This feels like a follow up to Growing Spaces. Some of the people I photographed for the book, I will probably revisit and continue to photograph their spaces, however probably more sporadically and only when something is happening there that will add to the series.

All images by Chris Hoare. Used with permission. Visit his website for more