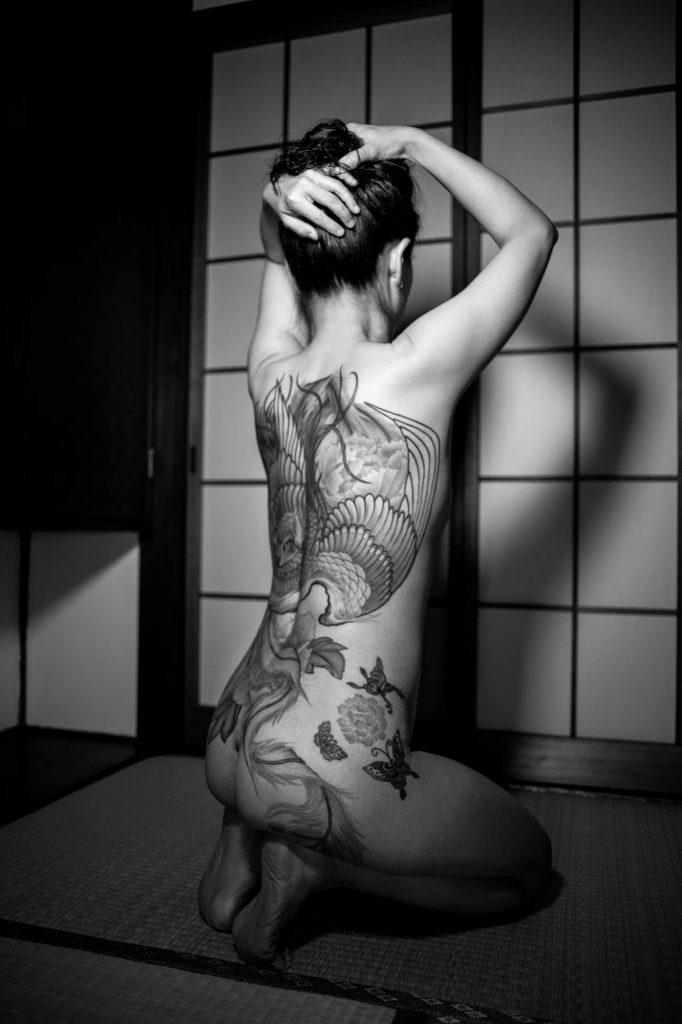 “I don’t really consider the people I photograph as ‘subjects’ because a lot of them become part of my life,” says Chloe Jafe. She adds, “it’s a moment of connection, an exchange, where vulnerability is on both sides. Photography is just what is left from the moment.” Jafe, who’s based in Japan, has fully immersed herself in the culture. For a photographer, living in Japan offers a range of interesting topics. In Jafe’s case, she found herself focusing her creative energy on the Yakuza, otherwise known as the Japanese mafia. It’s a series of photographs and encounters that have spanned over six years. She has very kindly agreed to share the story with us.

The Yakuza has a long, infamous history. Smuggling, prostitution, and drug trafficking are just some of the actives the organization is known for. That alone is enough to make many want to stay as far away from them as possible. However, Chloe Jafe has held a strong interest in them, especially women’s role within the group. “I was watching Samurai and Yakuza films and was always fascinated by the women’s role in them, as well as in Japanese society,” she tells The Phoblographer. She continues, “the film series “Gokudo no Onnatachi” was a big inspiration that pushed me to fly to Japan and start this work.”

In the beginning, starting the work proved to be a challenge. When dealing with an organization like the mafia, you can’t just pick up your camera and start shooting. You have to gain trust, and the initial cultural differences made that difficult. Chloe Jafe explains, “when I arrived in Japan, I barely spoke Japanese, and I quickly understood that I would need to learn the language to do this project the way I wanted. I also needed to have a good understanding of the Japanese culture as well as the codes of the underworld. But while I was learning and observing, I was meeting people along the way.”

Building up her presence in a foreign country took time. She hit many dead-ends initially, and it seemed the work would be more difficult than expected. But then a dose of good fortune came her way, and Jafe’s vision started to take off. “I eventually met an important boss from the [Yakuza] organization, I had to gain his trust first, and then his wife’s trust, and that was a whole other story!”

Jafe would meet her subjects either through an introduction or by chance. For her, an outsider, asking to focus her lens on the part of the culture that’s often pushed underground, meant that she had to make people she photographed feel comfortable. When asked how she achieved this, she told us, “I guess I showed myself as being pretty vulnerable yet determined. I took the time to get to know the people I photographed and let them know me.”

Once the work started to pick up pace, Jafe found herself branching out of her base in Tokyo and began to make photographs in other cities like Osaka and Takamatsu. Finding which location to shoot in wasn’t too much of a concern. Jafe was happy to work in an environment that best suited the people she photographed. “The sento (public bath) was a nice place to take photographs of their tattoos,” she explains. “We would both have to be undressed, and it was pretty natural.”

The Role of Body Art

What’s striking from some of the images shot by Jafe is the body art that’s embedded on her subjects’ bodies. Intrigued to learn about its meaning, we asked her to share with us what she learned.

“The body art in Japanese is called “irezumi.” It’s an important part of the underworld. I understand it can appear glamorous from a Westerner’s perspective, but it’s quite the opposite in Japan. It’s still very taboo, and you can become an outsider to Japanese society if you get inked. I personally find them beautiful. They are full of symbols related to Japanese mythology, and it was an obvious visual aspect I couldn’t ignore.”

Chloe Jafe is far from a “gear head.” She prefers to focus more on the content rather than the tools. It’s for that reason that she tries to keep her gear to a minimum but admits she still finds she has too much in her camera bag.

“I usually have an SLR camera, a pocket camera, a Polaroid camera, some led lights, and a tripod. I use prime lenses with manual focus, so I will prefer my pocket camera when I have to catch something quickly. When I have more time, I really enjoy using these manual focus lenses. I focus on the screen of the camera, the whole process takes time, and it reminds me of when I used to photograph with a large format camera. I enjoy this process, particularly when I take a portrait of someone. It creates some tension that I find interesting to work with.”

There are many things to think about when asking for an invitation to the criminal underworld. Safety is, of course, one of them. Jafe explains the whole experience gave her rushes of adrenaline, and at times she had to use her instincts to get through the work. But overall, she remained safe and gained the respect of the members of the Yakuza.

In closing, we asked her what her biggest lessons have been throughout the project. “I learned to be patient and persevering. It was quite tough at the beginning. I felt lonely and discouraged because no one believed in my project, but somehow I didn’t give up, and I am happy I didn’t.”

You can see more work from Chloe Jafe by visiting her Instagram.

All images by Chloe Jafe. Used with permission.