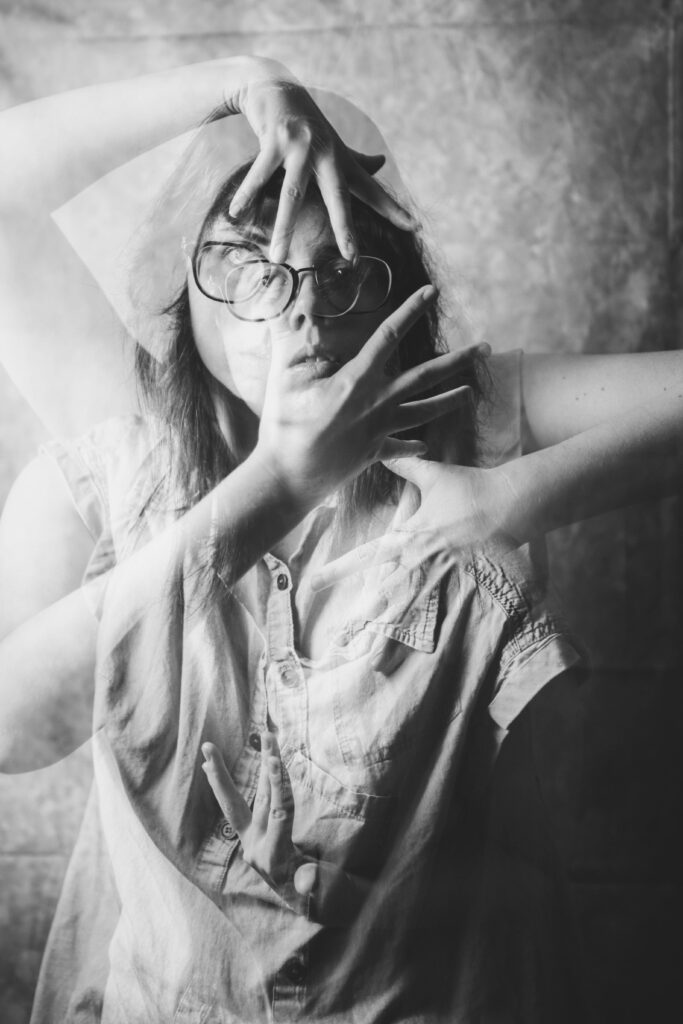 “People don’t like change, especially changing their views,” notes Dallas-based photographer Cherisha Kay Norman about society’s lack of adaptability to changes around them. As someone who has gone through many illness, she feels there needs to be more open and transparent discussion around the topics.Her series Layers of Symptoms tries to bridge this gap visually.

Taboo topics are often difficult to bring up in conversation, but a picture is worth a thousand words. Using her photography, Cherisha Kay Norman takes self-portraits to spread awareness of various mental illnesses that she’s been through. It’s not a topic everyone is comfortable discussing, so it takes a combined effort from us all to change this. It’s complicated to achieve this when many who suffer do so in silence.

“[the Sigma 30mm lens] has a bit more of a wide angle than most prime lenses do and I like how well it works in low lighting, where I can capture more atmospheric shots.”

The Phoblographer: Hi Cherisha. Please tell us about yourself and how you got into photography.

Cherisha Kay Norman: Hello. I was born and raised in Texas and currently reside in Dallas. I got into photography after graduating high school and taking a year to myself to have a break from school life, as well as also to recover and come to terms with being diagnosed with Bipolar 1 after my first manic episode in my senior in high school. During this time, I became very bored from having so much time on my hands, and I started to notice the Texas sunsets and the skyline more. I would grab a point and shoot and try to capture the sunsets I would see, and then I slowly gravitated to taking pictures of the plant life around my house, as well as still life. It took a couple years until I started experimenting with portraits the more comfortable I became with the camera.

The Phoblographer: The word ‘symptoms’ in the title would indicate that something isn’t quite right. What’s the general idea behind your series Layers of Symptoms?

Cherisha Kay Norman: The series is mostly trying to depict a visual representation of the sensation of dealing with different types of mental illness, from anxiety, depression, dissociation, mania, and even psychosis. I created the double exposure effect in Photoshop because, as someone who deals with chronic mental illness, it feels like I am separating from myself in multiple ways. It’s hard to see myself and the present moment clearly, which can be a very disorienting and frustrating experience. Also, the symptoms of mental illness are not just symptoms; they are a reaction to something happening internally or externally, the core issues that cause these symptoms might be genetics, trauma, issues coming from an environment, or other factors. I believe the core issues that cause mental illness have many layers to them. I named this series “Layers of Symptoms” because the longer these core issues go unaddressed, the more mentally ill symptoms start to arise and stack up like layers.

The Phoblographer: When did you decide you wanted to create this series? Was it something you observed in someone close to you?

Cherisha Kay Norman: It was inspired by my own experience. I have been hospitalized 9 times for my mental health, and I use photography as a type of therapy now to portray what I experience within myself in a visual way. I feel photography is a great source of storytelling without words and helps me stay present during the creative process. I feel mental illness definitely is something that needs more understanding in the world, and I can only try to help by sharing my own experience within my creativity.

But the truth is, gear doesn’t matter too much too much, you can achieve great images as long as you know how to use what you have to your advantage.

The Phoblographer: The subject’s hands appear to be in motion in all the frames here. What does this represent?

Cherisha Kay Norman: The hand movements are supposed to represent the overactive mind and the nervous system while going through anxiety, dissociation, or even psychosis, where it is hard to follow all your thoughts and feelings because they become so disorganized to the point where it becomes disorienting.

The Phoblographer: What feedback has this series received so far?

Cherisha Kay Norman: I don’t believe I have ever really gone into the depths of the meaning of this series before. I know those who are fans of my photography appreciate its aesthetic, but I am not sure if anyone has really tried to analyze the visual representation before. I have only received positive feedback on this self-portrait series.

I am shocked what people can capture with just a phone camera, prompt against some books, I often find those images more impressive because it shows, it’s the eye of the artist that makes an impactful image, not the equipment.

The Phoblographer: Anxiety and depression aren’t considered mental illnesses in some societies. Why do you think it’s so hard for some people to accept these daily battles people quietly face?

Cherisha Kay Norman: I am not very informed about cultures and societies that don’t accept scientific proof of mental health. But as someone coming from a religious background where mental health topics were labeled as taboo, I think lack of education plays a large factor; but also, I noticed there is a fear of accountability and the unknown as well. People don’t like change, especially changing their views if their current view is familiar and serves them in some way. It’s hard to convince someone to accept a new perspective, especially if it’s inconvenient to them. Mental illness is messy, and it’s uncomfortable, which also leads to inconvenience because one needs support during these mentally disabling episodes. The majority of cultures have been conditioned that expressing human distress and emotions is considered a weakness because people do not want to face the discomfort of it. It takes a collective effort and support to make a new perspective of life comfortable and available for everyone, and getting enough influential people to promote a new way of life is simply not easy. People suffer quietly because of the fear of being ostracized and judged and often don’t want to be felt and seen as a burden.

The Phoblographer: What’s it like as a creative artist to deal with mental illness and also be expected to produce interesting work?

Cherisha Kay Norman: I have dealt with manic psychosis, which is a complete break from reality, crippling depression, anxiety, and dissociation. I think it’s important to not hide this part of myself.  As a creative, I feel I create my best work when I am honest and try to visualize topics I know on a personal level, or at least make work I am most proud of because I am not trying to hide my human experience. Despite how it might be perceived by others, I believe there is a power in radical honesty when it comes to art.

The Phoblographer: Mental illness is often considered a taboo subject. What can photographers do to spread awareness and get more people talking about it?

Cherisha Kay Norman: Photography is a type of a storytelling tool; I believe if a photographer wants to tackle the topic of mental illness and mental health, ether wanting to express what they go through or try to give a voice to someone else, I think really listening to how you or they feel and trying to visualize it can help. To be honest though, for me, creativity is a type of meditation, and I like to improvise. I might have an idea of an image that will pop in my head and might not know why I want to create it, but once the images are created, the feelings behind the visuals give me the message I feel they are trying to portray. Sometimes art knows what it wants to say before you do; it just asks you to create it first before it tells you the actual meaning. That usually works when you trying to convey your own personal experiences. When it comes to trying to give someone else a voice, it takes a collaborative effort. I definitely believe deep communication and education, respect, empathy, and a creative outlook are really the keys to creating something impactful! Because I think striving for an accurate and honest portrayal is very important when it comes to any expression and storytelling.

All images by Cherisha Kay Norman. Used with permission. Please visit her website, and her Behance, Instagram and Facebook pages to see more of her photography.