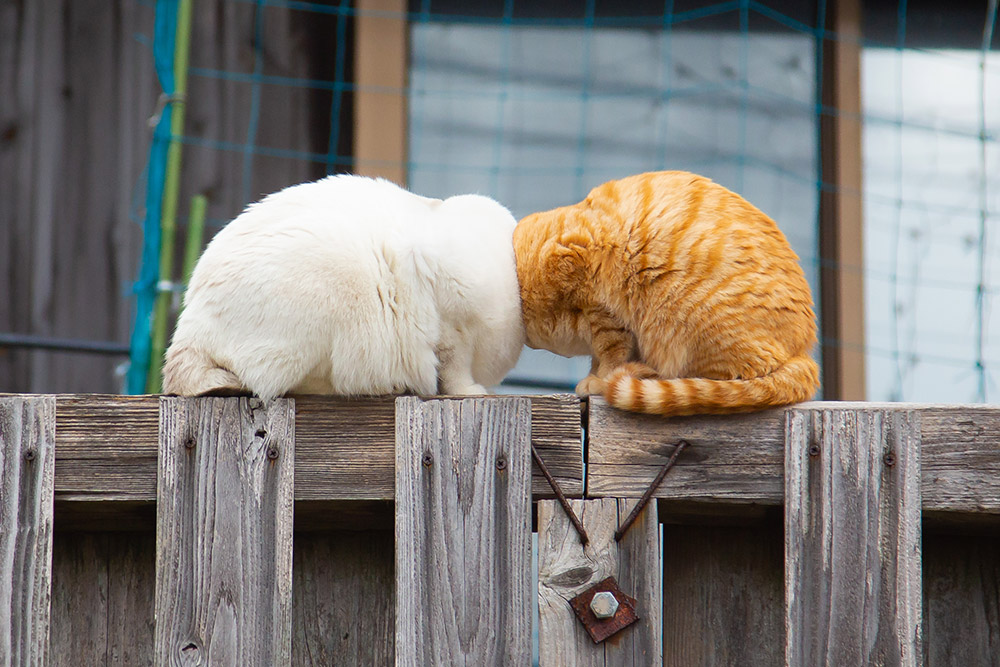 An image of Japanese street cats has netted its photographer the title of Overall Winner in the Comedy Pet Photo Awards.

The image, taken by photographer Kenichi Morinaga, is titled ‘BOOM BOOM’. It depicts two cats atop a wooden fence pressing their faces so hard together that their heads have all but disappeared. The shot, which also won in the Cat category, triumphed over more than two thousand entries.

Kenichi Morinaga said that he spends much of his time touring the islands around Japan with his camera, and loves in particular taking shots of the street cats there. ‘They are so funny, even when they are doing something serious,’ he said. ‘This amazing competition reminded me that such gestures from all animals are recognised as being hilarious, cute, and heart-warming not only in Japan but all over the world.’ He regularly shares his shots on Instagram, under the handle @morikencatphoto.

Other category winners from the competition include Jose Bayon from Spain, who triumphed in the Dog category. Bayon won with an image of a rescue dog named Nilo excitedly frolicking in a garden. Marko Jovanovic from the USA won the People’s Choice public vote award for his image of a dog caught mid-dash through the snow.

Winner Kenichi Morinaga wins a £2,000 cash prize. He says he will use it to fund more cat-photographing expeditions to the islands of Japan. He has chosen The Cat Welfare Group to receive a £5,000 donation from competition sponsors Animal Friends Pet Insurance.

Co-founder of the Comedy Pet Photo Awards Tom Sullam said, ‘We’re so chuffed to see such a funny selection of winners this year from all over the world. And brilliant to see our first ever cat winner! Huge congratulations to Kenichi.’

The full list of winners, as supplied by the organisers, is below.

The 2023 Comedy Pet Photo Awards are open to enter now – head to comedypetphoto.com to submit your image. And if you need some pet photography tips and pointers, check out our guide to how to photograph pets.

Winning tips from the Pet Photographer of the Year

How to be an ethical wildlife photographer