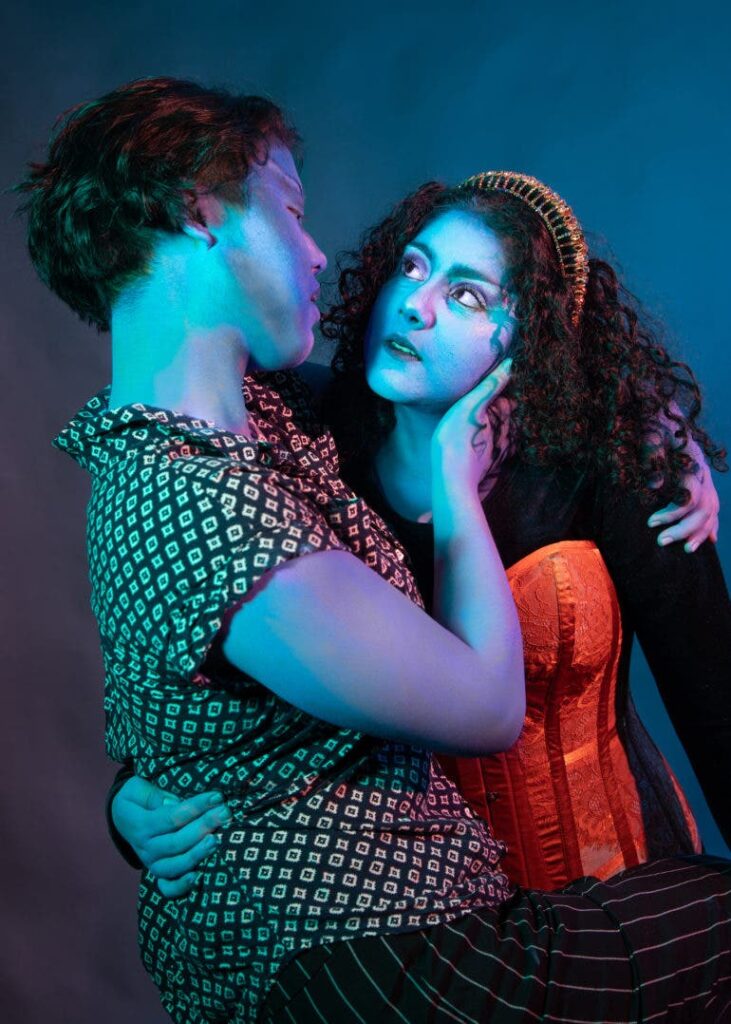 “This series has become a way for me to honor and advance queer relationships,” says BFA student Carlos Hernandez about his one-of-a-kind photo series called Queer Alienism. He aims to showcase elements of queer existence beyond the current limitations he observes. The goal is to, one day, understand and participate outside the current boundaries of cis/heteronormativity.

Photo series with body paintings are not new, but Carlos Hernandez weaves queer elements in the themes of each photo in his series Queer Alienism. This isn’t just to increase awareness about the topic in a surreal way. It’s also about illustrating the literal alienisation queer folks face from their existing communities.

I primarily photograph with a Canon 5D Mark IV with a simple 24-105 or 40mm lens. Lighting is a much less rigid matter, as I often work with a variety of strobes, speedlights, and continuous lighting. This changes specifically due to the location and how much space is available. Ultimately I’ve learned making images has nothing to do with the gear you use and everything to do with how you use it. Some of my favorite work has been made using cheap flashlights.

The Phoblographer: Hi Carlos. Please tell us about yourself and how you got into photography.

Carlos Hernandez: I am 21-year-old a research-driven visual artist and curator, currently pursuing a BFA in Photography & Imaging and Social & Cultural Analysis. I grew up in the Dominican Republic until the age of 8 when I immigrated to the U.S. It was in the U.S. where I began to see the arts, but ultimately it would not be until high school that I would begin doing photography. This was because my access to the arts was limited to school programming, which often centered around the performing arts rather than photography. I had grown up watching creators on Youtube, which inevitably inspired me to buy my first camera. Once I had the camera, I realized I was much more interested in making still images. At this point, I searched for any and all affordable photo workshops and programming, which would be vital for helping me develop a critical practice. Currently, my approach to art and, therein photography, works to deconstruct colonialist perspectives and expand on the work of BIPOC & Queer people to reinforce our autonomy and worth beyond the constructs of their historical confines.

The Phoblographer: What is Queer Alienism about? What was the inspiration to create this unique series?

Carlos Hernandez: Queer Alienism began as an in-class exercise in my advanced lighting studio. The series stems from my research in queer theory and queer history at the department of social & cultural analysis. I’ve specifically focused on intersectionality and understanding the role that visual culture plays in socialization and social movements. After reading a passage from Jose Esteban Muñoz’s Cruising Utopia, I became interested in imagining queer realities beyond the limitations of our present; I allowed myself to think of the queer realities where queer people could just be. Ultimately, this series has become a way for me to honor and advance queer relationships within ourselves or others – romantic or not – through looking inward at how we build support systems in the present while we build toward utopia.

The Phoblographer: The face painting might have taken quite some time. Tell us about some of the challenges you faced while creating this series.

Carlos Hernandez: These shoot days often involve 1-2 hours of makeup per model in addition to the production time itself, which can take anywhere from 2-4+ hours if necessary. I had initially started doing the makeup with tin water paints for children’s face painting but more recently have been training myself to use an airbrush machine so the application can be easier and smoother.

The Phoblographer: Was it overwhelming at first: juggling the makeup, styling, lighting, and photography? How long did it take to create each image?

Carlos Hernandez: The most difficult part of these shoots is often the planning and logistical side. On the day of execution, I rarely schedule other tasks in order to allow myself to be as present and focused as I can be. The key in my image-making is creating a shot list prior to the shoot that has 3-5 specific images that I’ve planned accordingly for the ‘episode’ of QA. Having a clear picture of what I want to shoot and how it should look is incredibly important, then I’m able to focus on the actual construction of an image. This allows me to have a limited number of selects which means a much shorter image production time. More often than not, stress on set is a result of makeup or lighting issues, but at this point, I try to take those and roll with them since resourcefulness is all about being able to circumvent those small issues.

The Phoblographer: I’m curious to hear what the response to this was . Were people amused at the alien part of the concept?

Carlos Hernandez: I have been very grateful to receive support from my communities since the beginning of the work. I think the visual aesthetics of the work specifically drew a lot of attention as folks were perplexed on whether it was some sort of digital drawing or not. Since the initial works though, there’s been a growing consciousness and understanding of the conceptual work, which I’ve loved witnessing.

The Phoblographer: Were there comparisons to comic / movie series?

Carlos Hernandez: One of the first things mentioned after I shot the self-portrait of my partner and me, Let me go softly, was “you look like Vision.” Funny enough, I’ve never been very well-versed in the comic book and series world as I didn’t grow up on them, but I hope this aesthetic simply helps further my intentions to dissociate these subjects from their earthly surroundings. Alas, it is this very line of real/surreal–present/absent that I am interested in politicizing in regards to the alienation of queer folks.

The Phoblographer: If you had to pick your favorite image of the series thus far, which one would it be and why?

Carlos Hernandez: My favorite image of the series so far would have to be Captors of Love. The image depicts two individuals as they rest their heads on the others, shown before a cityscape. This image was the second shoot I had ever done for the body of work but it also was the first time during the production of the work that I had felt a sense of ease and accomplishment upon completion due to the execution of my vision.

The Phoblographer: What’s coming up next in this project? How far would you like this series to go?

Carlos Hernandez: Over the next couple of months, I will be continuing to work on the series, producing additional works for my upcoming thesis show. Since the series began with a look at one on one relationships, I’ve departed from these installments to explore the individual and the broader familial. Ideally, I would like to continue the series to visualize the expansive queer realities that I’ve yet to experience and identify in my own life. The goal of this project is to develop my own understanding of how I can, and do, experience the world outside of the presumptions of racialized cis/hetnormativity.

All images by Carlos Hernandez. Used with permission. Drop by his website and his Instagram page to see more of his photography. Want to be featured? Here’s how.