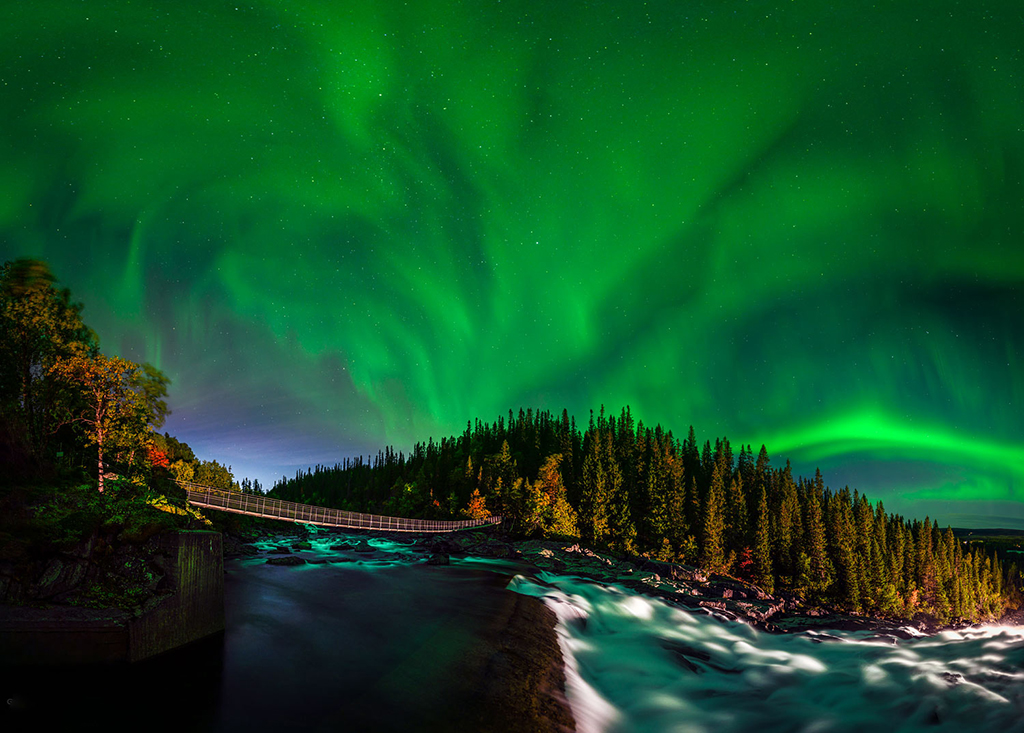 When it comes to low light and night photography, few subjects are more compelling – and popular – than the Northern Lights. As the Royal Meteorological Society explains, this hugely photogenic phenomenon is caused by activity on the surface of the sun. Solar storms spew out huge clouds of electrically charged particles, which can travel millions of miles.

Anyway, you don’t need to be a meteorologist or physicist to know that the northern lights are like catnip to photographers. Swedish photographer Göran Strand dedicates his life to shooting them, so we caught up to get his tips – don’t forget to sign up for his forthcoming tour in March, organised by Zoom Photo Tours and AP.

As Göran explains, he’s been interested in astronomy and watching the stars for as long as he can remember, so it was more or less inevitable that he would point his camera skywards at some point. ‘It all started in the mid-1990s when I got my first telescope. After some time I realised that there’s so much beauty and interesting things about space and different light phenomena, so I decided to start showing my photos more publicly and doing lectures about what you can see and photograph.’

Göran started doing workshops about a decade ago. ‘Back then it wasn’t as popular as it is now. I think the interest for northern lights really kicked off with social media and that the camera gear that was needed got cheaper and more accessible to more people.’

We wondered how Göran went about making his images of the northern lights original and eye-catching – after all, many photographers all over the world now have them on their bucket list. ‘I’ve been photographing the northern lights for almost 20 years now so for me the challenge is to come up with new ideas,’ he explains. ‘I often think “what can I do next time that I haven’t done before?” I think my imagination and curiosity helps me with my creativity. I always strive to improve my creativity and ideas for new compositions to keep making interesting photos that stand out in some way.’

Common pitfalls to avoid when photographing the Northern Lights

As a seasoned workshop leader, Göran has a lot of experience in helping photographers to capture this magnificent spectacle for the first time. He’s got some useful insights into the mistakes that people tend to make.

‘People often forget to include the surroundings, and I notice this a lot. They forget to include the northern lights in their context. Let’s say you photograph the northern lights back home and then go to, let’s say, Iceland. You need to show Iceland at the same time. Also people often tend to underexpose the photos a bit too much in the beginning, and that in turn exacerbates the problem of not seeing the surroundings.’

Göran is now a Nikon Z ambassador and reckons the smaller form factor of these still very powerful mirrorless cameras is a big help when it comes to shooting the northern lights. ‘Both the camera bodies and lenses are smaller which makes it easier to move around and be more creative. The LCD screen also makes composition much easier when working in awkward positions. The new Nikon Z9 also has a new feature called Starlight mode which really makes it much easier to compose a photo in total darkness. This mode helps the camera to focus right down to -8.5 EV, while illuminated buttons help to change settings in the dark.’

When it comes to camera settings, Göran is first of all adamant that a tripod is still needed, despite the many breakthroughs in in-camera and lens image stabilisation when it comes to low-light photography. ‘As for settings, it all depends on the surrounding conditions and the intensity and activity of the northern lights, but usually a good start is something like ISO 1600 and a 5-10 second exposure.

For composition, the most important thing is to be playful with your camera. Try to get up close to something in the foreground – usually a low angle gives a more dramatic feeling to a photo. For the northern lights themselves, look for interesting formations.’ Göran tries to keep editing to the minimum. ‘Some photos are just a 10-15 minute edit, but big panoramas can take a couple of days before I’m satisfied with them. I use Adobe Photoshop with Adobe Camera Raw for my editing. For panoramas, I use PTGui and for astrophotography, I use PixInsight.’

At the moment Göran’s main mirrorless cameras are the Nikon Z 9 and Z 6II, for the reasons outlined in the main feature. ‘The two DSLRs I’m using the most are the Nikon D850 and the Nikon D810A. The latter is a special astrophotography camera that Nikon released back in 2014. It’s more sensitive to red light which is very good when taking photos of nebulas and so on.

Göran Strand is a freelance photographer based out of Östersund, Sweden, who specialises in astrophotography. Many of his photos have been published by NASA’s Astronomy Picture Of the Day, SpaceWeather.com, National Geographic and more. In 2013 he received an astrophotographer of the year award in Sweden. See astrofotografen.se

Shoot the Northern Lights with Göran

As mentioned, you can learn directly from Göran himself on his forthcoming Northern Lights in Abisko tour from 10-13 March 2022. It takes place in Abisko National Park in Sweden, which many experts believe is the best place in the world for northern lights photography.

‘Besides general camera settings and photo editing I will explain how the northern lights work and how to predict them. I will also teach how to make panoramas and time-lapses. There will be lots of tips and ideas on composition and I will be explaining how to work in a dark and cold environment… when your vision is limited and your fingers get cold, it’s much harder than you think!’ Full tour details can be found at zoomphototours.com/northern-lights.

Steve Winter on his sensational career and Tigers Forever tour

AP Photo Tours: what to expect