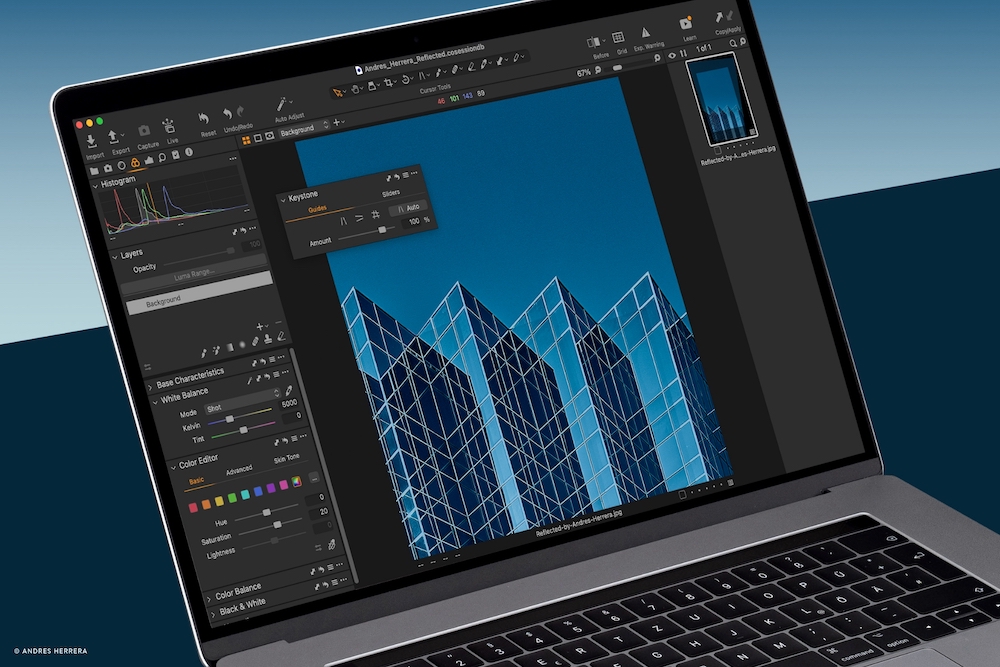 Software company Capture One has revealed details of an update to its Capture One 22 software (15.2.0) that includes feature updates, a redesigned keystone tool and ‘substantial speed improvements’ across many of the most frequently used functions.

The news is the latest announcement in a busy 2022 from Capture One, which has already seen the company launch its ‘Live’ remote photo platform and reveal details that Capture One for iPad and iPhone was coming soon.

The Keystone Tool in Capture One 22 has now been split into Guides and sliders tabs and Auto Keystone has been added for all camera models to help to allow for quick and precise perspective correction in almost all images.

Capture One software had previously sorted images by name as default – it now also offers by date as default and will make it possible to set a custom default sort criteria as well as direction.

Capture One 22 (15.2.0) is available immediately as a ‘perpetual license’ for $299, as an upgrade from previous generations for $159, or on subscription basis, starting from $20 per month.

You can also request a 30-day fully featured free trail of Capture One Pro 22 at Create your Capture One account.

For full details see the official full press release from Capture One below:

COPENHAGEN, April 5, 2022: Capture One releases a dynamic and powerful update (15.2.0) to Capture One 22 that sees an entirely re-envisioned keystone tool, a slew of feature updates with expanded capabilities, and Apple silicon performance advancement that brings substantial speed improvements across a host of the most demanding and frequently used functions. This update also brings new camera and lens support for a number of the most recent hardware releases.

Reflecting Capture One’s ongoing commitment to the photographic community to continually evolve with feedback, there are a host of user experience improvements, and this release also marks a streamlining of the Capture One product line as subscription users of Brand licenses will have their product automatically changed to Pro, expanding functionality by enabling utility for all supported camera models and file types.

The Keystone Tool has been redesigned with new functionality and a new user interface. The Tool is now split into two tabs, Guides and Sliders, making it easy to automatically apply corrections and as well as manually tweak the result afterwards, and Auto Keystone has been added for all camera models, allowing a swift and precise perspective correction of most images.

A comparison of the old Keystone toolbar, left, against the updated version, right

Let Capture One detect and correct the perspective automatically. By pressing the ‘Auto’ button in the Keystone Tool, lines in the image(s) are automatically detected, evaluated, and used for the correction. The result is a swift automatic correction with high precision.

By default, Auto Keystone will correct Vertical Keystone. This can be changed by simply selecting one of the other two guide modes to activate the cursor tool. The icon within the ‘Auto’ button will change accordingly and pressing it will instantly apply the desired correction. Auto Keystone works on batches of images.

Auto Keystone can also be triggered from the regular Auto Adjust functionality in the main toolbar. To do this, tick Keystone in the drop-down menu of Auto Adjust. Note that only Vertical Keystone is available from Auto Adjust, and if Capture One is unable to detect suitable lines in the image, pressing ‘Auto’ will have no effect.

To allow the Keystone Tool to provide perfectly vertical and horizontal lines when correcting perspective using the Guides, the new adjustment type Skew has been introduced. Additionally, the default Amount is changed from 80 to 100. Decreasing this after using the Guides is useful in some scenarios where creating a more natural perspective is desired as opposed to perfectly vertical or horizontal lines.

The following areas have been improved:

The algorithm behind Auto Rotate has been improved, providing more accurate results on images where clear lines (such as horizons horizons) are visible.

When changing the Aspect Ratio through the Crop Tool, the Crop will instantly snap to the new ratio. his makes it easier and more intuitive to work with different aspect ratios, as you don’t have to make a change to the crop for the new ratio to apply.

Important functionality is no longer hidden behind drop-down that could only be accessed through long-pressing the icons. Instead, a redesign of these icons and menu behaviors makes it intuitive and easy to use. Most icons have gotten a downwards arrow that will open the menu, and all menus can be opened by right clicking their icons. The affected areas are:

Capture One has always sorted images by Name as default. This is not optimal when shooting with multiple cameras. Many users have asked to be able to sort by Date as default. This new functionality will make it possible to set a custom default sort criteria as well as direction.

Capture One’s profiles are unlike any other and are the meticulous work of a dedicated team that carefully evaluates and interprets each camera’s RAW formats. This process allows Capture One to present images with the utmost fidelity, often bringing out nuances that other programs can’t even perceive.

Currently offering RAW support for more than 500 cameras, Capture One also provides profiling and image correction support for more than 500 lenses. As with the RAW file interpretation, Capture One carefully measures the optical characteristics of each supported lens and builds correction algorithms that compensate for the various optical imperfections of various designs. As a result, Capture One can correct numerous common optical issues such as vignette, and chromatic aberration as needed for each of the supported lenses, providing users with the best possible version of an image. As always, the team remains dedicated to adding increased support for the newest camera bodies and lenses.

Capture One Pro 22 is available as a perpetual license or subscription:

For a complete list of all products and licensing options, visit: www.captureone.com/store

For a 30-day fully featured free trial of Capture One Pro 22, visit www.captureone.com/download

Capture One for iPad and iPhone coming soon