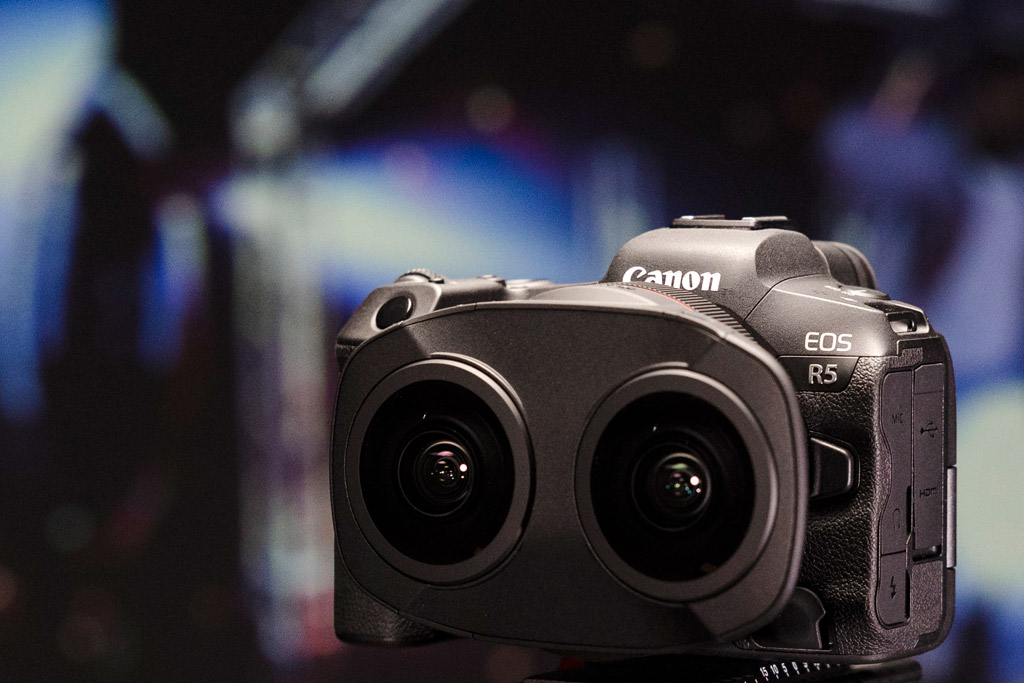 Not just an announcement of a new lens, but Canon is also introducing the EOS VR System, a simplified setup designed to let you create VR content more quickly with less complication. Thanks to being able to use just one camera, rather than having to use two seperate cameras, lenses, and all the associated processing that goes with that.

Canon’s EOS VR SYSTEM, which includes a new Canon RF 5.2mm F2.8L DUAL FISHEYE lens, has been developed in response to demand for high quality 3D 180° VR content. With the adoption of VR technology on the rise across many sectors such as training, travel, sports, live events and documentaries, Canon’s new offering simplifies the whole process of stereoscopic 180° VR capture and post-production. The EOS VR SYSTEM’s ability to create an immersive experience brings viewers into the heart of the action by providing professional image quality and higher levels of realism.

The Canon RF 5.2mm F2.8L DUAL FISHEYE dual forward-facing fisheye lenses have an ultra-wide 190-degree field of view which form the basis of its stereoscopic VR capture capability. Canon’s advanced lens design then enables projection of two images onto the camera’s single sensor for perfect alignment and synchronisation straight out of the camera. By utilising the lens in this way, VR setup is simpler than a two-camera system.

Capturing two images on a single sensor also means that both images have the same performance characteristics, avoiding subtle variances such as image quality and exposure that other two sensor systems can suffer from. Additionally, the two EMD (aperture) units, one for each lens, are also finely controlled to maintain a consistent exposure onto the sensor – helping to reduce post-production grading and expertise required to match the left and right image output.

The compact lens features a clever folding optical design and baseline distance of 60mm for a natural looking view. Engineered to work with compatible cameras within the VR system such as the Canon EOS R5, the system offers both the portability and familiarity of the EOS System.

The stereoscopic Canon RF 5.2mm F2.8L DUAL FISHEYE lens features the infamous red ring, denoting it as a professional L-series lens that utilises two UD elements per lens, helping to produce sharp clear images, from edge-to-edge. The Canon RF 5.2mm F2.8L DUAL FISHEYE lens SWC coating is ideal for shooting with the sun in the frame, as it suppresses ghosting and flare of sunlight – a commonly encountered shooting condition in VR capture.

The brand-new EOS VR SYSTEM uses the Canon RF 5.2mm F2.8L DUAL FISHEYE lens on a single sensor camera where no lens alignment is required – meaning only one file is produced for both the left and right images which is already perfectly synchronised. This allows the Canon software or plug-in to accurately convert the captured dual circular fisheye format to a standard 180° VR format, ready for further editing in Adobe Premiere Pro or viewing on a VR headset.

Typically one of the more complicated and time-consuming tasks in VR content creation, Canon’s new powerful EOS VR Utility application and EOS VR Plug-in for Adobe Premiere Pro makes the image conversion processiv, from a dual circular fisheye image to a more recognisable side-by-side equirectangular 180° VR format, effortless. With these additional solutions, videos and stills can be easily processed3,v and exported into various resolutions and (professional) codecs, up to 8K in file size for video output2 – designed for post-production editing and/or final playback on suitable VR headsets.

This high-quality solution leverages the benefits of the RF mount whilst delivering innovative new VR technology to simplify the entire process of 180° VR capture from set up through to post-production.