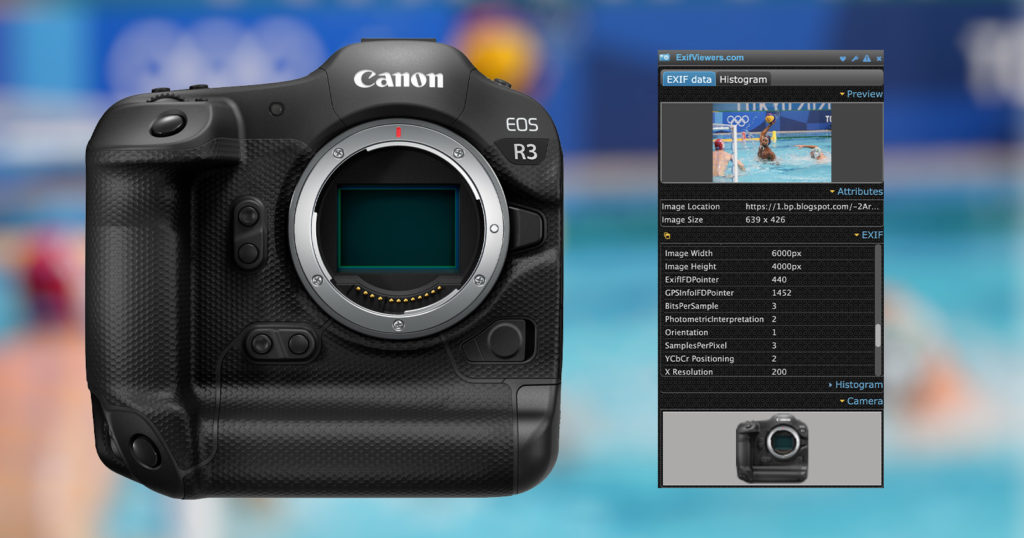 As part of ongoing testing of the Canon EOS R3 at the Olympics, photographer Jeff Cable has uploaded many photos that he has taken with the camera and EXIF data remained. As a result, the resolution of the new camera has been revealed: 24-megapixels.

EXIF data isn’t visible when photos are downloaded and viewed through a program like Adobe Bridge, but the Chrome plugin EXIF Viewer Pro does work. Using that plugin, a member of the CanonRumors forum discovered that Cable’s photos weren’t stripped of their data and therefore the images revealed full information about the camera and lens he is using. Not only does it show that he is indeed using the unreleased R3 — which Cable has previously confirmed — but it also shows that the original resolution of the files was 6,000 pixels by 4,000 pixels: exactly 24-megapixels.

PetaPixel reached out to Canon for comment, but the company declined to make a statement about the camera’s resolution at this time.

The resolution of the Canon EOS R3 has been a topic of debate since Canon announced that it was developing the camera earlier this year. Multiple early reports incorrectly guessed the camera’s official announcement window while others, much more strongly believed, said the camera would be at least 30 megapixels which led to wild rumors that Sony actually was developing the sensor, not Canon. Canon quickly rebuffed those rumors.

Its resolution is one of the few major specifications that Canon did not share about the R3 in either the initial development announcement or the follow-up that came two months later. While the company has publicly stated other major hardware features like eye-control autofocus, supposed low light performance, new autofocus detection modes, and the fact that the sensor would be an in-house backside-illuminated design, the actual resolution remained a mystery.

In speaking to PetaPixel, Cable said that he was not instructed by Canon to scrub the EXIF data from any photos he uploaded to his blog, and presumably, that means the company also gave him permission to upload as many as he liked while covering the Olympics. This makes a lot of sense, as too heavy of restrictions on the camera’s use would make it difficult for testers to make use of any of the images they capture for events they are covering.

It was trendy to immediately compare the R3 to Sony’s flagship Alpha 1 camera without knowing full specifications or waiting for a public release of the camera, but such a comparison was not particularly fair (just as those who compare the R5 to the Alpha 1 are not particularly fair either). As shown by its name, the R3 may be a sports-focused camera, but it was not going to be Canon’s highest-end mirrorless model — that is reserved for the one-series line. The R3 was likely to, at best, compete with the Sony Alpha 9 line, and sports photographers actually prefer the lower resolution because it allows them to have faster workflows with media outlets that do not require more resolution for web or print news. There is room for both classes of camera to exist from multiple manufacturers.

The confirmation that the R3 will feature 24-megapixels further solidifies that it is Canon’s answer to the Alpha 9, not the Alpha 1. It may be some time yet before fans will see Canon’s version of a true flagship in a mirrorless body.