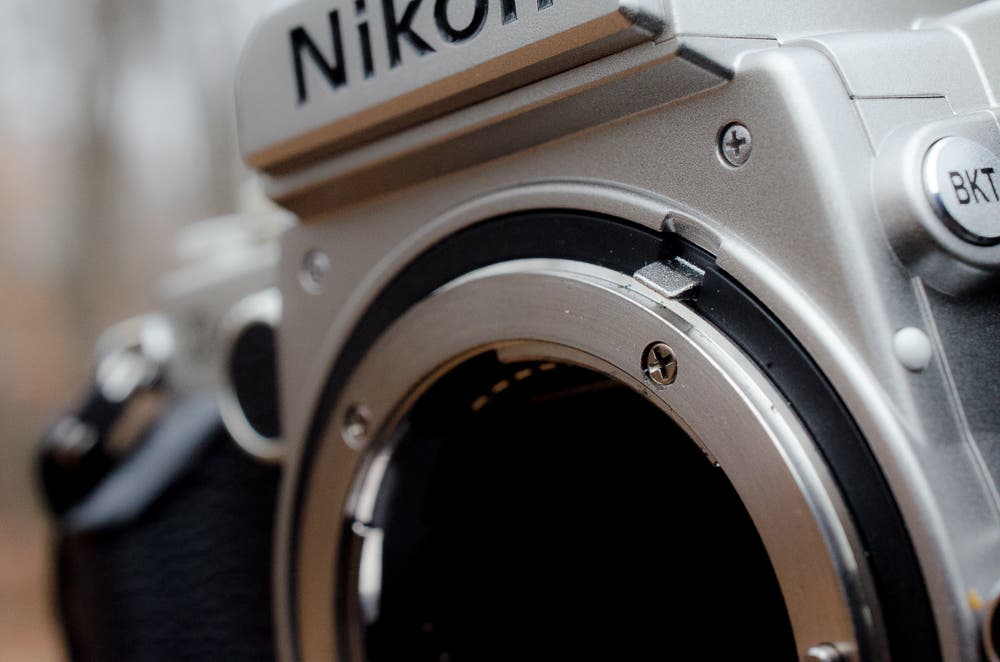 In the past decade, the DSLR died. We know some of you still swear by them and that they’re still shooting award-winning photos. But let’s be honest, mirrorless cameras can do so much better at this point. There’s no way a DSLR competes with what a mirrorless camera does. To be frank, DSLRs are dinosaurs. Deep down inside us, there’s a part that thinks dinosaurs are cool. I mean, how many of us love watching Jurassic Park or Kaiju films? This is where DSLRs need to go or they’re ever going to come back.

Think Retro with a DSLR. Where the Nikon Df Went Wrong

Our focus here is to make the DSLR retro. I know the Nikon Df tried to do this. It embodied the Homer Simpson ideal of a camera. In one episode, Homer tells Bart something along the lines of the following:

“If you hate your job, you don’t quit. You come in every day and do it half-assed.”

That’s what the Nikon Df felt like. Nikon seemed to create it just because of the hype of the Fujifilm and Olympus cameras coming out. But in the end, Nikon couldn’t create a product anything like their old film cameras. However, that’s what brands need to do now for the DSLR to come back.

DSLRs can be made a lot better with a bigger, brighter, more matte viewfinder. I remember how for years the camera industry didn’t care about visually impaired photographers. They kept making viewfinders smaller and harder to see when something was in focus. That was a very tough time for the industry. Now, if they want a DSLR to return, they need to make a better viewfinder to compete with what mirrorless offers. More importantly, they’ll have to make it better for manual focus lenses. Then, it would also work for autofocus lenses by default.

Maybe I’m pressing my luck here, but also consider only one focus point in the center. Do you know how many folks only use that and then recompose?

Mirrorless cameras are light, and they achieve that much better than DSLRs ever will. So DSLRs should just lean into what they are. Imagine something with the build quality of the Pentax 67, Nikon F, Canon F1, or a Leica R6! DSLRs should feel like those as there’s surely an audience that would love it. Don’t believe me? Look at how film cameras and film has returned!

What’s more, it’s not like the brands will need to make more lenses. They have a lot as it is. And for what it’s worth, they cared more about camera sales than they ever did about lens sales. So they could just focus on cameras, and leave the third-party market to take care of the rest.

Target Them Just to Photographers

Here’s another reality: no content creator is going to care for a DSLR. It will just be for photographers. Mirrorless cameras will work just fine for content creators. But photographers have been asking for cameras just for them for a long time. Give it to them with a DSLR.