Buying Underwater Portraits by Alex Sher Helps a Special Cause 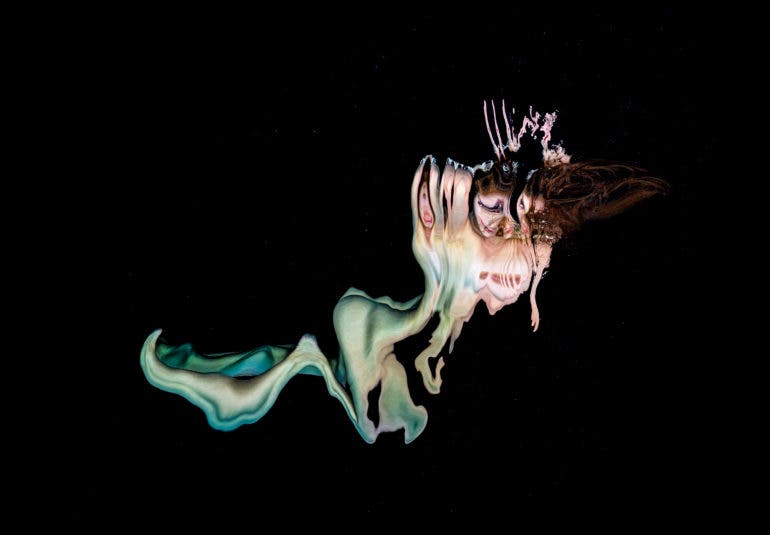 Photographer Alex Sher likens the addiction to photography to an infection. He claims his grandmother “infected” him with it, and that his father only added to it. If photography were an actual disease, a doctor would probably consider it hereditary based on what Alex tells us. The Ukrainian photographer started to get into conceptual photography during the COVID lockdown. And he emerged with positively stunning photographs.

Subscribers get some sweet perks and are automatically entered into contests! Download our app for iOS, iPad, and Android and get no banner ads for $24.99/year.

“I remember hours in labs with magic red light and pictures emerging on white paper,” says Alex about his origins. “I started taking photographs at 12 and had my first exhibition at 24. When I was 30 my photograph was stolen from the exhibition…” This, Alex jokes, is what makes him a renowned artist!

Alex truly feels like he came into his own when he was a postgrad student in Siberia. He was surrounded by creativity, and everyone was a photographer. He remembers a big photo lab with chemicals and film. Alex and his colleagues also mixed their own recipes for development. When he graduated, he turned one of his bedrooms into a photo lab.

During the COVID lockdown, Alex spent a ton of time on a boat editing old photos. By then, he’d already been photographing underwater, but during the lockdown he started to experiment with cropping and reflections. “It sounded like a strange idea; however it looked rather interesting,” says Alex. “I poured myself a glass of wine and began writing down the stories for the new pictures. Not all of the stories looked right the next day.” Despite this, Alex was invigorated with energy about his photos.

When lockdown was lifted, Alex went back to photographing in pools. Specifically, he remarks that his models were surprised at the new shooting style he developed. “I had to assure them that COVID did not affect my brain; at least not in a bad way,” says Alex. One of the big things he said changed was that he was aiming for the surface while underwater.

To get his images, Alex uses Nikon and Sony cameras along with Zeiss and Nikon glass. He pairs those with Nauticam underwater housings and Ikelite strobes.

“Shooting reflections is a tough job. Aside from the usual complexity of underwater photography, the reflections live only for a split of a second, much shorter than it takes your camera to focus. A good reflection is approximately on one of a thousand shots. After four hours in a pool with models, you end up with a single good reflection shot – if you are lucky.”

Alex tells us that his work is very much about adapting. He doesn’t plan ahead, and so he works with what’s in front of him. In fact, Alex says that planning ahead never works for him. “It does not mean I never tried,” says Alex. “I did – many times. I was bringing some weirdest things to the pool.” Alex has these glorious visions of all the photos he’d take, but ended up throwing them out in the end.

“Many photographers plan their photographs ahead of time. This never works for me. My creativity feeds on visual inspiration. I think the process of building images in your head rather belongs in a writer’s toolbox than helps a visual artist. I totally agree with Gotthold Lessing here: each art has its own tools and using the wrong tools is a bad idea and building photographs in your head is a wrong tool for me.”

Being a photographer and the legally blind Editor in Chief of this site, I had my thoughts and questions. Alex Sher is undoubtedly a fantastic photographer. But something about the work made me wonder if there are prisms or kaleidoscopes used. After all, having an extreme astigmatism via kerataconus in my eyes make me understand how some folks think. But Alex, believe it or not, never thought about it. “The water is an optical miracle,” says Alex. “Imagine a huge liquid mirror on top of a prism with yourself hanging deeply inside like a fly in amber. The mirror is instantly moving, breaking itself into little liquid shards, creating a weird kaleidoscope.” Alex cites that the entire process is unpredictable and that the reflections kind of have minds of their own.

Being Ukrainian, Alex is sending money to the Ukraine with the sale of his images. With each sale, he’s sending at least $100.

“My total contribution over the 5 months of this war is $6,350. My preferred recipients are families who can’t earn their bread money during the war.”

All images by Alex Sher. Used with permission. Check out his website and remember that purchasing his photos helps a Ukrainian artist and helps families in a war-torn country. Want to have your work featured? Click here to see how.