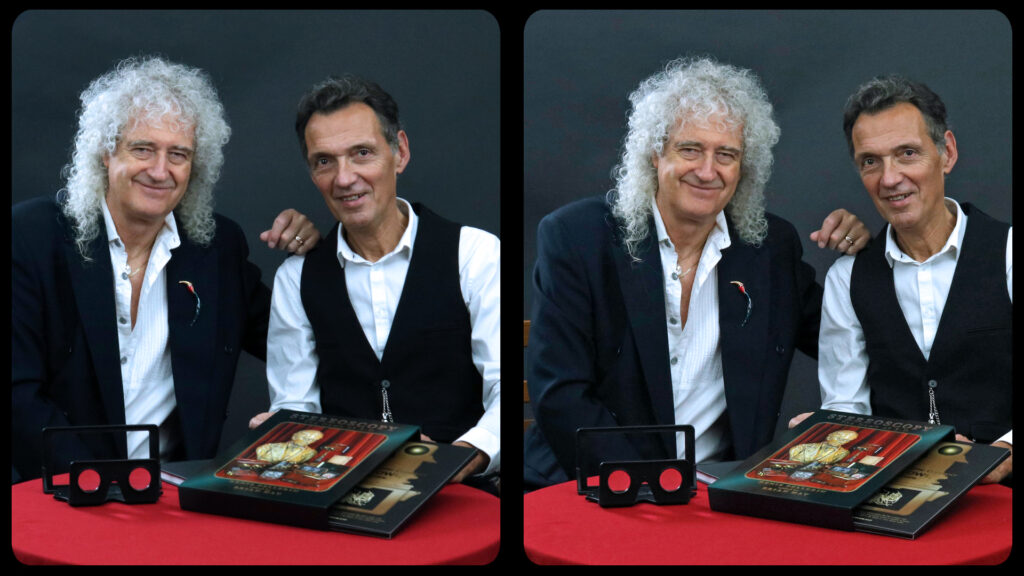 Rock star Brian May, who owns the London Stereoscopic Company, has revealed plans for the first-ever International Stereoscopy Day, which will be held on 21 June 2022 to raise the profile of 3D imaging.

The event is planned to be a new international celebration of the birth of stereoscopic 3D.

It will celebrate the inventor of stereoscopy, the British genius and polymath Sir Charles Wheatstone (who revealed his stereoscope in 1838), its early pioneers and their successors up to the present day.

Queen lead guitarist May has had a lifelong 3D obsession and, in 2008, he resurrected the London Stereoscopic Company (LSC) to popularise 3D photography and publish 3D photography books.

Brian May Archive of Stereoscopy

Now, the Brian May Archive of Stereoscopy (BMAS) is leading the worldwide Stereoscopy Day initiative.

Denis Pellerin and Rebecca Sharpe, curators of the BMAS, are working with stereoscopic enthusiasts around the world to engage new talent in this cutting edge photographic medium.

Pellerin explained, ‘Stereoscopy was invented nearly 200 years ago and yet most people still do not know about its creator, its history, its past or its present, and have no idea of the magic it holds. We have two eyes for a reason, and we generally take it for granted that we see the world in its three dimensions. It’s high time we paused to marvel at the miracle of 3D vision and to (re-)discover how it can be replicated thanks to stereoscopic 3D. At a time when travelling was fairly dangerous and reserved to the wealthy few, the Victorians yearned to discover the world as it really was, in its full roundness. Thanks to [Charles] Wheatstone’s work on binocular vision, and to his stereoscope, it became possible for nearly everyone to become an armchair traveller and see the wonders of our planet as if they were there, yet without leaving their fireside. In the 21st century, Stereoscopy can still take you to wonderful places and enable you escape into parallel realities or even fantasies. It literally opens a window into different worlds, and with the passing of decades stereo images have become a wonderful time machine. This is why Stereoscopy should be celebrated over and over again.’

Brian May said, ‘This is an exciting new step for Stereoscopy, and I’m grateful to Denis Pellerin and Rebecca Sharpe, curators of the BMAS, for not only coming up with the idea, but putting it into action at such a high level. Stereoscopy Day will be a celebration everyone can share of the unique position 3D imaging occupies in the world today, embracing art and science, and extending humankind’s vision and understanding of the world around us.’

The day will highlight 3D’s long history from its first golden age, through its subsequent periods of popularity, right up to the present day.

The organisers said, ‘We hope to bring attention to Stereoscopy’s rich diversity and multiple uses in various fields, as well as the sheer immersive magic it brings to photography and other applications.’

The long-term aim is for Stereoscopy Day to be celebrated across the world every year on 21 June, which is the anniversary of the day in 1838 when Sir Charles Wheatstone officially presented his revolutionary Reflecting Stereoscope to the Royal Society of London and demonstrated his theory of binocular vision.

A more portable version of the stereoscope was later popularised by Sir David Brewster.

Stereoscopy Day – how to take part

On 21 June 2022 the organisers of Stereoscopy Day are inviting the world to flood social media with creative stereoscopic images:

If new to the mission, you will need to download a 3D camera app. The LSC recommends 3DSteroid for Android phones and i3DSteroid for iPhones, but there are other 3D apps online.

Until 24 June 2022 all of the LSC treasures – from books to gadgets (including the 3D OWL Stereoscopic Viewer designed by Brian May) – can be purchased with a discount of 21% from the London Stereoscopic Company Shop.

World Stereoscopy Day is organised by the Brian May Archive of Stereoscopy, a Charitable Incorporated Organisation, with the support of the London Stereoscopic Company and of numerous groups, organisations, institutions, companies, and artists, including The National Portrait Gallery, Birkbeck, The Royal Photographic Society, King’s College London, St Andrews, 3-D Film Archive, Science + Media Museum, among others.

To discover more about the event, go to the Stereoscopy Day website.

In 2008, Brian May, who has had a lifelong passion for stereoscopy, recreated a Victorian phenomenon, the London Stereoscopic Company (LSC), with a mission to inspire the modern world to think in three dimensions.

Now, 14 years later, the LSC is a thriving 3D dedicated publishing company, and enthusiasts from across the globe can be seen sharing captivating stereoscopic images on social media.

You can find out more at London Stereoscopic Company.