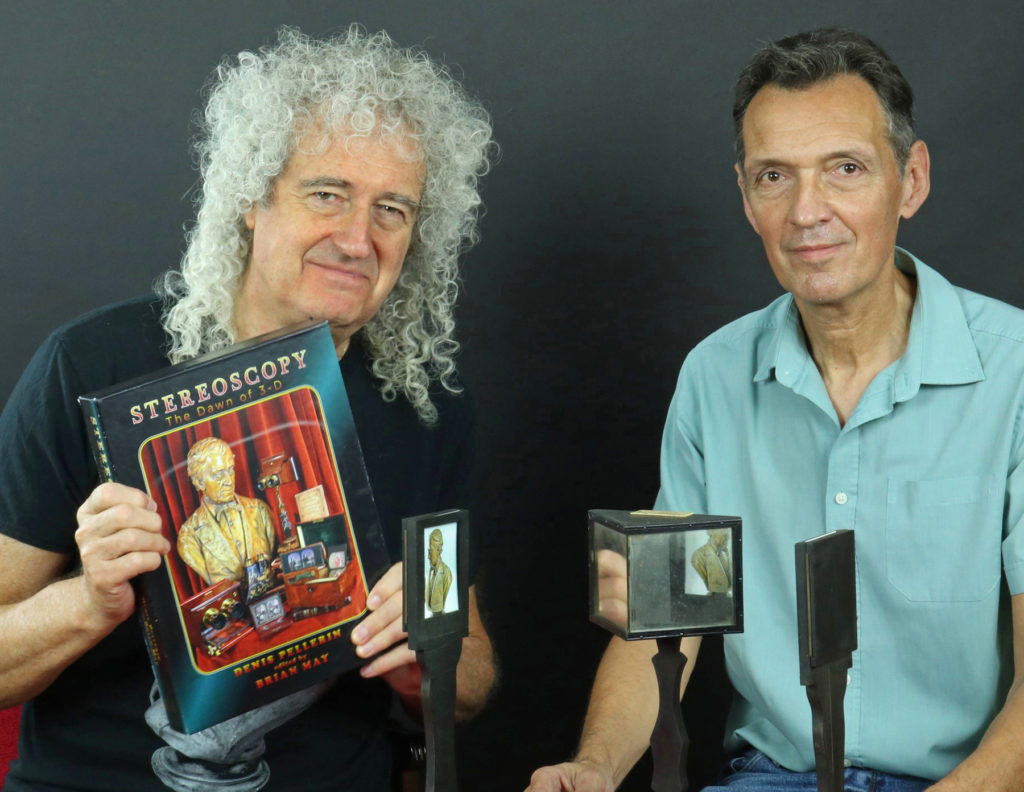 New book by photo-historian Denis Pellerin, edited by Brian May, STEREOSCOPY: The Dawn of 3-D tells the astonishing story of stereoscopy through the pictures that captivated the Victorians from the mid 19th century.

Brian May and Denis Pellerin

Following the invention and popularisation of Stereoscopy, millions of Victorians peered into a small, dark, magical box and were transported into another dimension.

The immersive realism of what we now call 3-D, and Virtual Reality, beckoned to them to experience the far-flung wonders of the world without ever leaving their fireside. It was as if they were actually there amongst the Great Pyramids of Giza, or looking up at the Matterhorn, or standing in the rice fields of China.

Queen’s founding member and head of fine arts publishing house The London Stereoscopic Company, Brian May, has one of the largest collections of stereoscopy photographs in the world, unseen from his archive including a stereoscopy image of Dickens.

He says, “STEREOSCOPY – the Dawn of 3-D” – is the book I have dreamed of publishing since we resurrected the London Stereoscopic Company in 2006. It’s actually the most important book we have ever produced, because it chronicles the birth and first steps of what we now call 3-D – the very core of what we at the LSC proudly bring to the 21st Century.

Denis Pellerin, probably the foremost Stereo Photography historian in the world right now, has made it possible, with his uniquely original research, to put the historical record straight in this book.

It’s quite shocking that nobody has undertaken to tell this story in its entirety until now, and some of the revelations you will find in the book are in themselves shocking, because so many falsehoods have been perpetuated over the years about what actually happened.

The rivalries which led to serial misinformation are thoroughly explored in this work, and the result is a proper and final restoration of Charles Wheatstone as the true discoverer of Stereopsis, and the true inventor of the Stereoscope, the ancestor of every 3-D and Virtual Reality device in the world today.

The story begins in 1832, when Wheatstone, a true Victorian genius and polymath, discovered why creatures such as humans have two eyes instead of one, and how this enables them instantaneously to perceive their surroundings in depth – a massive evolutionary advantage. “STEREOSCOPY” for the very first time tells the full story of how this discovery became a world-wide sensation.”

From Brian May’s collection: Herbert Watkins, Mr. Charles Dickens. This is a very rare surviving copy, somewhat distressed, but the only stereoscopic example we have seen. More often seen as a carte-de-visite.

Viewed in the 21st century OWL stereoscope, designed by Brian and included with the book, the magical pictures, and the journey they represent, are revealed in their full depth and splendour within the book.

Having researched the history of stereoscopy for over 40 years, author Denis says, “This book has been in my head for so long and has involved so much research that I am thrilled it is being released at last, thanks to the efforts and dedication of Dr. Brian May and all of our team.

From Brian May’s collection: James Elliott. The Fairy. An English tissue stereo card. English tissues are relatively rare, though they appear before the 1860s, when tissue views became hugely popular in France. This one by Elliott had a custom cut-out matte which does not appear anywhere else. And the view is one of the most stunning examples of artistry in this medium.

It is a dream come true! This publication should set a few things right about the history of the first thirty years of the medium and should put stereoscopy once more in the limelight, where it rightfully belongs.”

Since 2012, Denis has also been the curator of Brian’s extensive collection of stereo photographs and has co-authored four book with Brian.

Stereoscopy: The Birth of 3-D, by Denis Pellerin, Edited by Brian May, published by The London Stereoscopic Company. Out now and available from: https://shop.londonstereo.com/stereoscopy-the-dawn-of-3-d.html

Join Brian May and Denis Pellerin at the live virtual launch on the evening of 10th November,  in association with