Brainstorming in a Bathroom Brought New Ideas to Michael Marrero 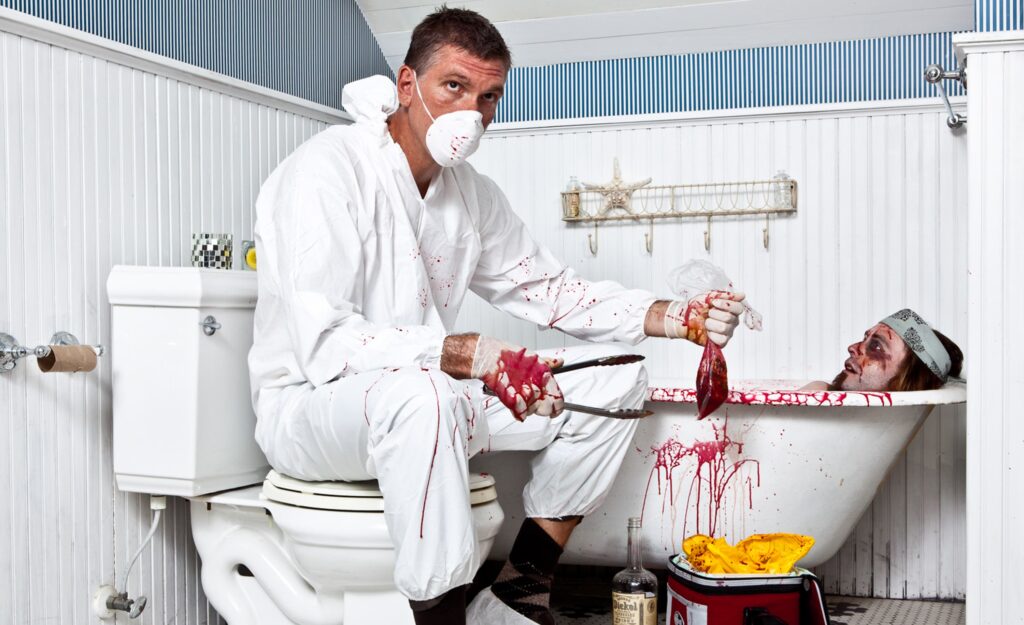 “A bathroom is private, it’s the most personal space in a home, and every person has their own particular relationship to it,” clarifies commercial photographer Michael Marrero about The Bathroom Series. Locked in a house for six hours and given a confined space to shoot in, he and his team came up with some witty stills. Things did look like they got a bit out of hand during this, and Marrero tells us more about it in this interview.

Of all the rooms that you could do a photoshoot in, imagine your luck when you’re allotted a tiny bathroom to get the creative juices flowing. Yet when challenged, Marrero and his friends came up with a handful of really unique images inside one. Each of these makes you stop and think about the creative process behind the concept. Michael breaks it down for us in an interview about ‘The Bathroom Series’ – one of his earliest professional works that came about from a photography challenge.

I’m a huge fan of Really Right Stuff. They make the type of equipment you can pass down from generation to generation.

The Phoblographer: Hello Mike. What has your journey to professional photography been like?

Michael Marrero: I am self-taught. My dad had a darkroom in our house growing up, so I learned how to process and develop film from a young age. I started doing professional photography around 2008 and have been at it ever since. When I first started, I did the wedding circuit for a bit as well as a ton of lifestyle shoots; being from Key West these types of shoots were my bread and butter. I’ve also been heavily involved in video productions and short films and have been lucky to have my shorts play all over the world. Although I continue to do commercial work, my photography work has shifted toward thematic projects and fine art. I’ve always been fascinated with trying to tell a complete story in only one frame. Now with NFTs coming onto the scene a whole different (and sometimes confusing) avenue is emerging.

The Phoblographer: Not quite an everyday type of series. Tell us where you got the idea for this project.

Michael Marrero: This series was created during a photo challenge. Six photographers were invited to an old, historic house with a local burlesque troupe serving as models. Each photographer was allowed to pick a room, master bedroom, vintage kitchen, creepy attic, grand study etc. We drew straws, and I got the last pick, so I got stuck with a tiny attic bathroom with a stackable washer and dryer. Definitely not the sexiest of rooms, or a room with many vantages to shoot from. It was basically one angle looking at the tub. So if my camera and lights are locked in place, I only had one option, vary the scene. Then it became about trying to figure out how many scenes I could create in six hours. I sketched them out, striving for humor and uniqueness, and then with the fantastic talent, we had available, I shot them all within six hours. It was probably the most fun I’ve had as a photographer.

The Phoblographer: It’s not exactly the centre of a household, but you’ve managed to portray a lot of scenes in the bathroom. What was the thought process you went through to come up with the varying ideas?

Michael Marrero: The bathroom may not be the center of a household, but it’s arguably the most important and personal room in a household. Anything shot in a bathroom is going to have a naturally voyeuristic feel to it. A bathroom is private, it’s the most personal space in a home, and every person has their own particular relationship to it. So I pulled out my sketch pad (I’m a firm believer in sketching out thumbnail compositions) and started to sketch out cinematic scenarios that could happen in a bathroom. Since I was locked into one angle, the story would need to be front and center. I wanted them to have the feeling that this was a private moment, that we shouldn’t be seeing this. With those guidelines in mind, the images started locking into place… kidney harvesting, bachelor party gone wrong, an arguing couple, etc.

The Phoblographer: Was there ever a moment where you felt you were stuck for ideas? If yes, how did you tackle this?

Michael Marrero: All the time! But with this project, there was no time for that. It was six hours. You just had to put your head down, trust your instincts and go!

The Phoblographer: Looks like it was crazy on set. Any interesting stories to share about the production?

Michael Marrero: We were shooting with a full-on burlesque troop; to say they were down for anything would be an understatement. At first, I was nervous they would balk at my take on the project since all the other photographers were taking a much more traditional pin-up style approach. But they were super excited by the concept. I think it was a nice change for them. When I asked one of the performers to pose as a dead hooker in the bathtub she just kind of shrugged her shoulders and said, “Been there before,” and gingerly hopped in the tub.  My personal favorite image from the series is the title girl with the goldfish. This little girl stopped by to see her mom, who was one of the performers, so we printed a picture of a goldfish, cut it out, and had her pose. The whole setup was about 15 minutes.

The Phoblographer: Are the different characters connected in any way? Is there a common thread between them?

Michael Marrero: The common theme is the bathroom. It’s had a long, twisted life. These are just some of the stories it has witnessed.

The Phoblographer: Blood and death seem to be recurring themes. Where did the gory inspiration come from?

Michael Marrero: I’m a big horror fan and a big fan of the surreal. I also believe the story should be front and center in any image. I’ve done a lot of work in film, so I’m always looking for a way to construct an entire narrative within a single image. I really enjoy deploying humor and horror since they are rarely seen in photography. A  bathroom is naturally given to horror; it’s such a naked and personal yet clinical space, a place where things are “disposed”. Everyone always feels a little more vulnerable in a bathroom. Also, the burlesque troop doing the modeling was down for anything so that definitely helped!

Michael Marrero: The entire room was roughly 12ft long by 6ft wide with a stackable water/dryer opposite the wall of the tub. So it was tight. I shot at 35mm and aimed a single flash into the corner behind me. Since the room was so small and the walls were white, the light basically bounced all around the room. I liked the look since bathroom lighting tends to be very white and directionless.

The Phoblographer: With so much content being created today, do you think there’s extra pressure on photographers to regularly come up with something unique like this? Does that weigh on your shoulder much during shoots?

Michael Marrero: I’ve always tried to tackle my photography from a narrative point of view. What is the story I’m trying to tell? I also enjoy deploying humor which is something I feel is often lacking in photography. There is no question that the sheer volume of content being generated now is both daunting and intimidating. Every voice is just one amongst millions. I think you have to stay true to yourself, your vision, passions, and point of view. These are the things that make each of us unique. Then it’s just a matter of putting your head down and getting it done.