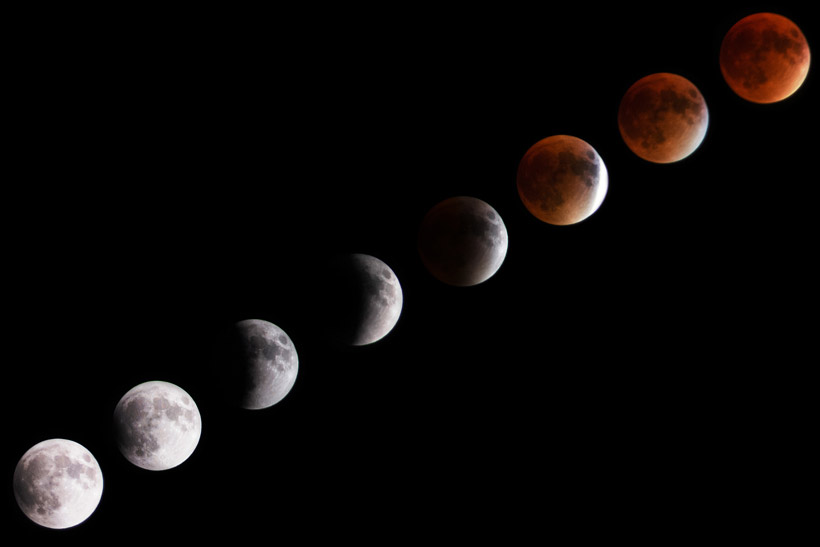 Blood Moon total Lunar eclipse, when, where and how to photograph the eclipse

The lunar eclipse, or blood moon where there is a total lunar eclipse, occurs every 3 years, and this weekend, you’re able to see a total eclipse, where the earth blocks the light from the sun, with the moon moving into the earth’s shadow. It’s a fantastic, and rare opportunity to photograph this event.

Lead Photo: Composite photo of the supermoon lunar eclipse of 2015 as seen from North America. The photo shows the moon through 8 various stages during the eclipse ending with the full “Blood moon” A.K.A. “Harvest Moon”. Credit: Vittgenstein, Getty Images.

When is the total Lunar eclipse?

The total lunar eclipse is happening 15-16th May 2022, and in the UK it will start at 2.30am, with the full eclipse will happen just before 4.30am. After 5.10am in the UK, the moon will no longer be visible. It will be visible in the UK, North America, South America, Africa, and parts of Europe. (Source)

How often does the Lunar eclipse happen?

There are usually 2-5 lunar eclipses per year, but these are often just partial eclipses, and visibility depends on where you are in the world. A total eclipse only tends to occur every three years, with two happening in the year. (Source)

When is the next total Lunar eclipse?

There is a total lunar eclipse in 15/16th May 2022, but if you’re unable to see this one, the next is expected to happen in November 2022, however, due to the eclipse happening at 11am in the morning (UK time) it won’t be visible in the UK. (Source: timeanddate.com)

When was the last total Lunar eclipse?

Why is it called the blood moon?

As the earth blocks the light from the sun, the moon will turn a red colour. The moon will turn red because of an effect known as Rayleigh Scattering, where bands of green and violet light become filtered through the atmosphere.

How do you photograph the lunar eclipse?

You’ll need a tripod, and ideally a telephoto lens (300-600mm equivalent or more), particularly if you want to show the moon as large as possible in the frame.

By using a self-timer or remote release, you can avoid camera shake. You’ll also need to adjust your exposure as the level of light changes as the moon becomes darker and darker, as it moves into the shadow of the earth.

Beware of clouds – if there are clouds in the sky, then this will cause problems viewing the lunar eclipse. Sometimes you might get lucky if there’s a break in the clouds. Be prepared for the moon’s position to change in your frame over time.

You’ll need to make sure your camera can correctly focus on the moon, or alternatively you’ll need to switch to manual focus to ensure the focus is spot on. Focus peaking, and/or a magnified view can help with this.

Shooting in raw (and JPEG) gives you the ability adjust the images later, to tweak noise and colour if needed. Don’t be surprised if your photo of the blood moon isn’t as red as other images you’ve seen of the moon on the internet – you will most likely have to play with saturation settings to match others!

Why is light pollution a problem for night photography?

Light pollution, such as streetlights, and lights from houses and buildings make it more difficult to see the dark night sky, as the lights effectively light up anything in the air, making it difficult to get a clear photo of the stars and other objects in the sky, such as the moon.

Therefore, it’s important to be away from any light pollution, so if you can get into the countryside then this will give you the clearest view of the sky. You can use a website such as www.lightpollutionmap.info to lookup the levels of light pollution near you, to see if there are any areas nearby that will give a clearer view of the sky. This is of particular importance when shooting stars and astrophotography.

Where else can I watch the lunar eclipse?

Shooting the night sky can be a challenging, but rewarding photography skill, see more tips from astronomy photographer of the year winners.

If you want to shoot more amazing low-light photographs, have a look at our guide on how to shoot aurorae, star trails, and the moon.