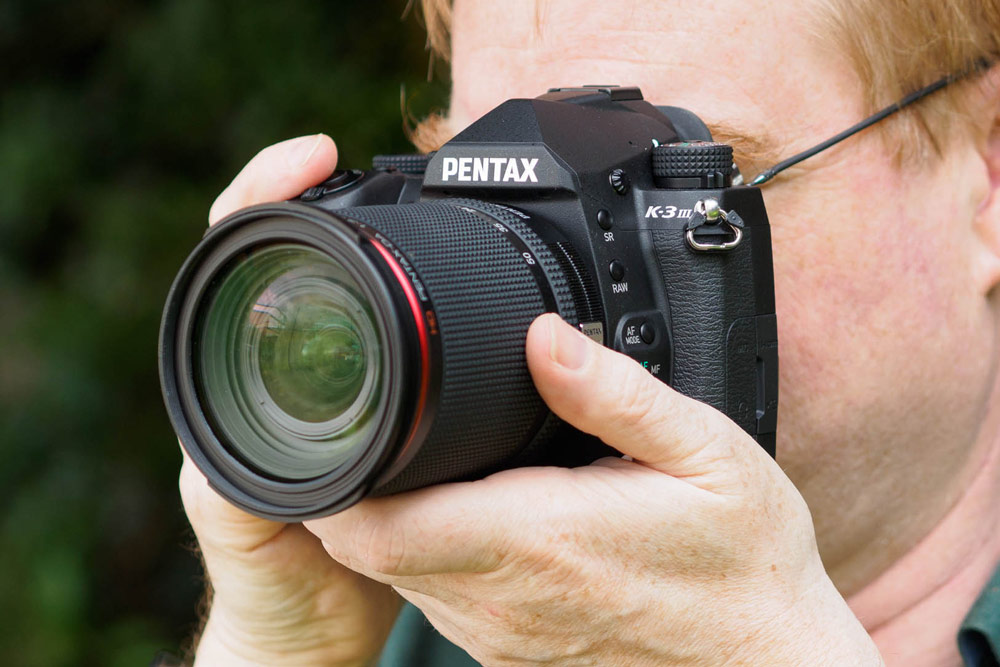 Best Pentax DSLRs in 2022 – Find the best Pentax DSLR for your needs and budget. Tim Coleman guides us through the best DSLRs available now, plus second-hand options, as well as highlighting some of the innovations introduced in Pentax DSLRs.

Pentax became a household name particularly in the 1970’s when its 35mm SLR cameras spread like wildfire into the hands of students and family homes across the world. In fact, by the early 1980’s more than 10-million Pentax SLRs had been produced, with the Pentax K1000 becoming one of the best-selling cameras of all time over its 20+ years of production.

Through innovations in TTL (through-the-lens) metering, autofocus, built-in-flash and compact design, SLRs took over from rangefinders as the camera of choice for the masses. Pentax continued its innovation and dedication to SLRs and took its K-mount into the digital age, and its cameras have come a long way since.

We’ve seen plenty of Pentax DSLRs over these last 20 years, mainly in the APS-C format. And in 2022, as the other big players Nikon and Canon have turned their backs on DSLRs and made it public that the future of their cameras is in mirrorless, Pentax remains loyal. In fact, after a brief flirtation with mirrorless in the Pentax K-01 (which had the same native compatibility with Pentax K-mount lenses), Pentax has declared its future remains in DSLR.

It’s yet to be seen how far Pentax will push DSLR technology in the future, certainly this market has slowed down. But what’s for sure, is that Pentax DSLRs in 2022 are photographer’s cameras through and through. Solid, dependable, feature-packed, low light masters with a huge wealth of K-mount lenses to draw from, there’s an option for every kind of photographer.

In our buyer’s guide to Pentax DSLRs, we feature all the best current models covering a variety of photography genres, and have included some older and quirkier options that paint a little bit of Pentax history. You’ll also find our suggested bargain buys. Happy reading!

If you want a full-frame DSLR, then the choice is simple in a Pentax buyer’s guide. There is only one series of full-frame DSLRs, comprising two iterations. The most recent Pentax K-1 II represented a modest upgrade from its predecessor the K-1, with the most notable improvement being the increased sensitivity by 2EV to a whopping extended ISO 819,200.

So what do the K-1 and K-1 II cameras have in common? Plenty of good things; a 36MP full-frame sensor with that excellent low light performance. A large pentaprism optical viewfinder (pentaprism is superior to pentamirror). Sensor shift stabilisation paired with GPS and a unique feature called Astrotracer that arguably makes the K-1 II the choice for astrophotography. Throw in some excellent K-mount lenses in the mix, and landscape and portrait photographers are catered for very well, too.

Pentax has a tradition of well-made cameras. This flagship weather-resistant camera is the toughest of them all, and you feel it in every one of its 1010 grammes! We love the clever four-arm design of the vari-angle touch screen, plus the illuminated buttons are a nice touch for low light handling.

Surprised by a new DSLR in 2021? Yes, these days new DSLRs are like hen’s teeth, but the Pentax K-3 III (see our review) is a mighty fine flagship APS-C format camera, afforded a wealth of K-mount APS-C lenses and high performance. Features are too many to list here, but highlights include the back-illuminated sensor with maximum ISO 1,600,000 sensitivity, 12fps with 101-point AF system and, wait for it, 4K video! Yes Pentax can do video, too.

Handling-wise, high expectations are met. This is a solid weather-resistant camera weighing 820g. It has excellent ergonomics, dual card slots, a bright and large OVF, top LCD, though the 3.2in 1.62m-dot rear touch screen is fixed which is a shame. However, if you want a high performance Pentax DSLR for the likes of sports and wildlife and don’t mind the cost (at launch the K-3 III was more expensive than the full-frame K-1 II and rivals like the Nikon D500), then K-3 III is the choice for you.

Entry-level DSLRs don’t come any better than the Pentax K-70. In fact, the K-70 possesses plenty of attributes that even advanced photographers appreciate, such as a weather-sealed body, comfortable grip, and a bright pentaprism optical viewfinder with 100% field of view. You simply don’t get these sorts of features in similarly priced DSLRs. On the flipside, it is larger and heavier at 688g when compared to other entry-level DSLRs.

For photographers, the innards of the K-70 are equally impressive; 24MP and a maximum ISO 102,400 with sensor-shift stabilisation, 6fps and built-in flash. Not forgetting its rugged build quality that is well suited to adverse outdoors conditions, and you have an all-purpose camera that is simply a great option to start out with DSLR photography. It’ll even provide on-screen prompts as you learn the ropes.

The digital medium format market was disrupted through the introduction of the Pentax 645D in 2010. Not only did Pentax do away with the digital back, but also significantly undercut the big players Phase One and Hasselblad. At around a third of the cost, the 645D opened up digital medium format to a whole new group of photographers, and was eventually replaced by the Pentax 645Z in 2014.

What you get in the successor is a camera boasting a 51.4MP resolution on a 43.8×32.8mm image sensor, a tank-like build both in size and durability whereby you can confidently break free from the studio, plus a gorgeous viewfinder and handy tilt-LCD for waist-level shooting.

It’s a real shame that Pentax seemingly lost interest in its medium format DSLRs, nor extend the lineup that is limited to six lenses, because it no longer enjoys predominance. Since the 645Z, Fujifilm launched its GFX range of cameras that includes the more cutting edge Fujifilm GFX 50S II, while Hasselblad added a more wallet-friendly lineup in the dazzling Hasselblad X1D series.

Pentax K100D Super DSLR – an updat to the K100D, the Super adds a dust removal system.

Sensor-shift stabilisation under the guise ‘Shake Reduction’ was introduced in the Pentax K100D and arguably set Pentax DSLRs apart for quite some time. Evolved to its current 5-axis form and compatible with a huge number of lenses, this feature paved the way for DSLR features unique to this very day, including Astrotracer (works with GPS), Pixel Shift and AA filter simulation.

As for the camera itself, the K100D has an 11-point AF array and optical viewfinder that would remain in Pentax APS-C DSLRs for many years, plus it boasts a top LCD which is usually found in high-end cameras only. Otherwise, the K100D understandably shows its years, with a CCD sensor, modest 6MP resolution, small LCD screen, 2.8fps drive mode, and it can’t shoot video. Still, you can pick up a K100D body only for around £50! The Pentax K100D Super, which was released at a later date, introduced a dust removal system, which is now standard across numerous other camera brands.

Have a look at MPB.com, and other retailers to see what used stock is available.

We can’t remember a DSLR that has been available in so many colours as the Pentax K-x, and the most memorable has to be the Pentax K-x rainbow edition. Made in collaboration with Tower Records and limited to 1,000 units, you’ll either want sunglasses as an accessory or for your own protection, depending which way you look at it!

Other than booting up with a rainbow image on the LCD (and its psychedelic shell), the rainbow edition is identical in every way to a standard Pentax K-x that harks back to 2010. That means you get a 12.4MP APS-C sensor, a decent OVF for the money, sensor-shift stabilisation, 4.7fps and, yes, video recording – gosh! It’ll be a mission to get your hands on the rainbow version, and you’ll have better luck if you like all-red.

Have a look at MPB.com, eBay, and other retailers to see what used stock is available.

To its credit, there’s not a lot more to say about the Pentax K-1 that hasn’t already been said about the K-1 II above. Unless you are a serious low-light photographer, then the K-1 offers virtually everything that the K-1 II does but at a significantly lower price (though the K-1 is no slouch in low light either). At less than £1,000 second-hand, it’s such a compelling purchase.

Both cameras offer high levels of sharp detail thanks to a 36MP sensor with no anti-aliasing filter. Where there is a risk of aliasing artefacts, the anti-aliasing filter simulator can be called upon – a feature that is present thanks to sensor stabilisation. Both cameras are comfortable in the hand, albeit on the heavier side. Both cameras really make use of sensor shift stabilisation for unique shooting modes. Overall, you’ll struggle to find a more capable DSLR for photography at this price point.

We’ve scoured second-hand stock held by reputable dealers in 2022 and the best Pentax camera you can snag sub-£100 is the Pentax K-r, where you’ll get the 18-55mm kit lens chucked in, too. It may have had a short 18-month shelf life being discontinued in 2012, but the K-r is a highly capable shooter considering its age.

With a 12.4MP APS-C sensor, extended ISO 100-25,600 range, an excellent choice of lenses, much improved LCD screen, a continuous drive mode of 6fps and 11-point AF system, the K-r is able to make excellent pictures for all types of photographers. Despite its more premium feel over the K-x, the K-r is not in fact weather-resistant, although a Li-ion battery was introduced whereas the K-x and other cameras from this era rely on AA batteries.

Have a look at MPB.com, eBay, and other retailers to see what used stock is available.