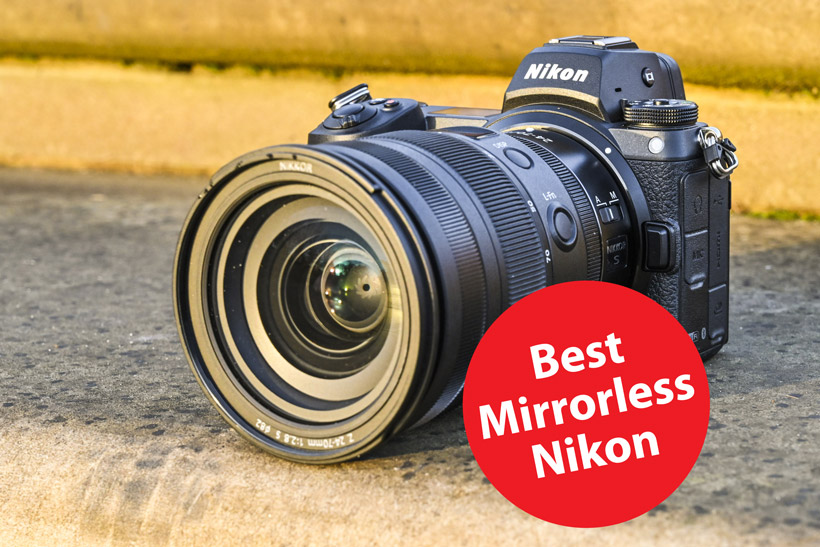 Discover the best Nikon full-frame and APS-C mirrorless cameras you can buy today – Choosing the best mirrorless camera can be a tricky task, with lots of different options on the market. Nikon is one of the biggest names in photography, with a long heritage stretching back over 100 years. For that reason, many people will often think of the brand when they want to buy a camera.

This guide will be looking at the best Nikon mirrorless cameras you can buy. All of Nikon’s mirrorless options use the same mount (the Z mount), but there are two different sizes of sensor – full frame, and APS-C. You can use existing DSLR lenses with Z series cameras via an optional adapter, while the company is expanding its native Z lenses more and more as time goes on.

How to choose a Nikon mirrorless camera

When considering buying a Nikon camera (or any camera), there’s some key specifications to think about, and these are the things you want to look at when choosing a Nikon mirrorless camera.

There is a choice of two sensor sizes for Nikon mirrorless cameras; either full-frame or APS-C. There are pros and cons of each type of sensor, so it’s important to think about what you really need – and not just automatically assume the bigger full-frame is better. That said, generally speaking full-frame does tend to give better image quality in a variety of different situations (such as low light). With APS-C however, what you lose image quality you gain in other areas, such as faster speeds for action shooting, and a smaller and lighter overall system for travel. When it comes to resolution, again it’s not necessarily true that the higher the pixel count the better. The type of things you photograph might well influence your decision here – for example photographers who shoot macro images may crave super high detail, while those who shoot action at multiple frames per second may prefer lower resolution files which take up less memory.

All of Nikon’s mirrorless cameras include both a screen and a viewfinder. All of the screens offer movement in some way – either tilting or fully articulating, both of which are good for composing from awkward angles. A fully articulating screen is more useful for video, especially if you want to record pieces to camera. When it comes to the viewfinder, take a look at both its size and resolution if you want the most natural experience possible.

All of Nikon’s full-frame cameras include in-body image stabilisation (IBIS). Neither of Nikon’s APS-C models offer it, which is something to think about – particularly if you’re likely to be using either model with long lenses. That said, you can mitigate for the lack of IBIS by always using lenses with stabilisation, or by consistently using a tripod in certain conditions.

If you want to photograph fast moving subjects, then you’ll be looking for a camera which offers a fast frame rate. On the whole, mirrorless cameras are better at this than their DSLR counterparts, with up to 30fps (frames per second) being available in some high-end models. This specification is likely to be less important for you if you generally shoot still subjects (such as landscapes, macro, portraits etc). As well as a fast frame rate, pay attention to the quality of continuous autofocusing too.

Pretty much every modern camera is equipped with 4K video recording at the very least. But there’s other specifications to consider, such as whether a crop is applied, the frame rates available and special video modes. You might even be looking for 8K video if you’re a high-end videographer. Alternatively, you might think video an irrelevance if you only ever shoot stills.

If you can actually hold a camera in your hands before you commit to buy it, you’ll get to know a little bit about how it handles. If that’s not possible, consider reviews, but also specifications such as weather-sealing, especially if you intend to be using the camera outside in tricky weather conditions.

Now that the Z series is a few years old, there’s a decent range of directly compatible optics. As both the full-frame and APS-C models share the same mount, you can use lenses across both formats, but bear in mind that any lenses you use on an APS-C sensor should have a 1.5x crop factor applied (so a 35mm lens becomes around 52mm for example). It’s also worth noting that there are specific lenses which are designed for the crop format sensor, which Nikon calls DX. If you can’t find a lens that you like in the Z line-up, it’s possible to use DSLR lenses via an adapter.

If you’ve got a very healthy budget and you want the best of the best, then the Nikon Z9 is the one for you. No matter what you like to photograph, it can almost certainly handle it, but it’s particularly worthwhile for sports and action shooters.

You can shoot at 20fps in raw format with continuous autofocus, but you can also go even faster if you’re willing to drop to JPEG, where you’ll get 30fps. You can even get up to 120fps if you’re happy to take a hit to resolution and record at 11 megapixels.

Unlike other models on the market, you can have both speed and high resolution with the Z9, which has a 45.7 megapixel full-frame sensor. Autofocusing is superb, with AI algorithms on board to detect the subject and follow it around the frame with almost perfect precision.

Of course a camera like this doesn’t come cheap, but for professionals and high-end enthusiasts it really does deliver.

If you’re looking for a great lens to go with your Z-mount camera, have a look at our guide to the best Nikon Z-mount lenses.

Until the Z9 made its debut, the Z7 series was Nikon’s flagship. It boasts a high-resolution sensor that will be appealing to landscape photographers or anyone that craves a serious amount of detail. It’s also useful for cropping if you want to shoot from a distance, too.

You get up to 10fps shooting, which while not superb for action, isn’t too bad if it’s not something you shoot relatively often. If you’re frequently shooting action, the Z6 II and certainly the Z9 (if you have the cash) are better choices.

Other useful specifications include 4K video, IBIS, and eye-detection AF (which works for both animals and humans). This is a fantastic all-rounder, which works well for professionals and dedicated enthusiasts who perhaps don’t have the need or the budget for the Z9.

If you’re after a solid and reliable all-rounder which is capable of shooting a number of different subjects – without breaking the bank – then the Z6 II is the one to go for.

Resolution is a more staid 24.5 megapixels, but this comes with the advantage of not only smaller file sizes, but the ability to shoot at up to 14fps (compared to the Z7 II), so it’s a better choice for sports and action too.

With other useful features including 4K video, IBIS, eye-detection autofocus and great handling, it’s a lovely camera that works well for a variety of different photographers and skill levels.

Best for: All-rounder photographers without a huge budget

If you want a full-frame mirrorless but have a limited budget, you could try the Nikon Z 5.

With this, you get a well-performing full-frame sensor and similar great handling as the more expensive Z6 II, but with some key compromises.

Although the resolution of the sensor is similar, the Z5’s is not back-side illuminated, so it doesn’t perform quite so well in lower light conditions. It’s also not quite as quick, especially when it comes to frame rates – so if action, sports or wildlife is your thing, it’s probably not the right model for you.

What you do get is a good performer for static subjects, and access to the full-frame system without spending a fortune – which makes it ideal for beginners and those upgrading to full-frame for the first time.

Best for: beginners, those new to full frame

Although it has now been replaced by the Mark II version, you can still pick up the original Z7. You can get especially good bargains if you look for it second-hand too.

The differences between the Z7 and the Z7 II aren’t that huge – so it really depends on the types of things which are “must haves” for you. The Z7 is slightly worse for burst shooting – but neither are cameras we’d particularly recommend for action shooters, so that might not be too much of an issue.

Another difference is that the Z7 II has dual card slots, compared to just a single XQD slot for the Z7. That’s perhaps a bigger issue for professionals who absolutely must have a back-up, but arguably less important for amateurs.

There are some other small differences, but the two cameras share the same sensor and body design, so if you don’t need all those extras, it makes sense to get the older (and therefore cheaper) version.

Just as with the Z7 series, the Z6 is still available to buy despite there now being a Mark II version to buy.

And once again, if you like everything about the Z6 II, but don’t have quite the budget, it’s worth checking out the older model which shares a lot of similarities – most notably the same sensor and outward body design.

What you don’t get is an extra card slot or quite so fast performance and shooting (but you’re still left with a reasonable 12fps). Once again, there are a number of small incremental improvements, but you can pick up a great bargain by opting for the older version.

If you want something small, light and not too complex, then the Nikon Z 50 arguably makes more sense than Nikon’s full-frame models.

It uses a smaller APS-C sized sensor, but uses the same Z mount as other cameras in the Z range, so you can use all the same lenses – or go for smaller ones which are more specifically designed for the smaller system for a great travel combo.

You get a well-performing 20.9 megapixel sensor, and 11fps which is decent for action / moving subjects. You also get 4K video and a screen which tilts forwards, which may appeal to vloggers.

Overall, this is a neat little all-rounder, and especially for the price is well worth considering if you don’t desperately crave full-frame.

Using the same base specifications as the Z 50, the Z fc should appeal to all of those that want something that not only performs well, but also looks the part too.

With its attractive retro styling, it’s quite possibly the best looking Nikon Z camera, but another advantage is the use of a vari-angle screen, which is a bit more flexible and useful than the tilting version found on the Z50.

Which you opt for may also come down to price – sometimes the Z50 is cheaper, sometimes its the Zfc – so it’s worth shopping around to make sure you get the best deal.

Once you’ve found the perfect camera for you, have a look at some of the best Nikon Z-mount lenses. Or have a look at more buying guides, and our latest reviews.