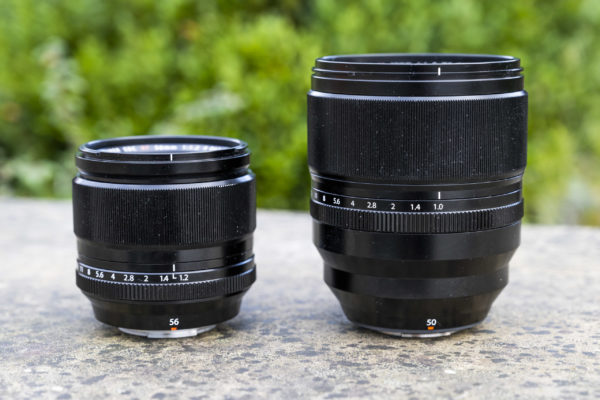 Who should you turn to when it comes to smaller, non full-frame mirrorless lenses? Angela Nicholson reveals all in our Nobody Does it Better series.

There are pros and cons to all digital photographic formats but one of the key benefits of an APS-C system is that the cameras and lenses are smaller than full-frame while still delivering high image quality. That’s great news if you’re planning to carry your kit over a long distance or throughout the day, but which manufacturer offers the best range of lenses to suit the format?

After careful consideration, the accolade for the best range of APS-S lenses has to go to Fujifilm…

It’s been 10 years since the Fujifilm X-Pro1 was first announced, in January 2012, and since then, Fujifilm has built up a superb range of lenses for its X-Series mirrorless cameras. Impressively, it has 21 prime lenses and 13 zoom lens listed on its website currently, plus a couple of teleconverters and two zoom lenses that are specifically designed for high-end video.

What’s more, Fujifilm has very high optical standards, and while photographers are often sniffy about the kit lenses sold with some cameras, Fujifilm’s XF 18-55mm F2.8-4 R LM OIS is a solid performer.

And although I’m not a huge fan of the handling of the XC 15-45mm F3.5-5.6 OIS PZ, there are no issues with its optical performance.

With the 1.5x focal length magnification factor of the APS-C sensor taken into account, that translates into a full-frame equivalent focal length range of 12 to 600mm, ensuring that there’s everything that a photographer could need whether capturing wide-angle interiors, landscapes, portraits, sport or wildlife images.

The XC lenses are more affordable than comparable XF optics and have a plastic barrel and mount, but if you pick one up, you’ll realise that they still have high-quality optics inside.

Fujifilm’s XF lenses have an aluminium barrel, external elements and mount, while their rings are machined from a solid block of metal, all of which makes them durable.

What do the letters mean?

Like most lens manufacturers, Fujifilm use letters to denote the technology or special features within an optic. Understanding what they mean is key to ensuring you make the right lens selection, so here’s a short guide:

APD: This is only used on the XF 56mm F1.2 R APD and indicates that the lens has an apodization filter within its barrel. This filter softens the edges of out of focus areas to give more attractive bokeh.

LM: Lenses with LM in their name use a linear motor for focusing, which is fast and quiet.

PZ: On the XC 15-45mm F3.5-5.6 OIS PZ, ‘PZ’ denotes than the lens has a power zoom. This means that rather than extending or retracting the lens manually by rotating a zoom ring, there’s a motor that drives it.

R: Most, but not all of Fujifilm’s X-mount lenses have an R to indicate the presence of an aperture ring.

WR: This indicates that the lens has seals to make it weather resistant.

Which are the best Fujifilm X-Mount lenses?

Most photographers start out with one or two lenses and gradually build up a collection that meets all their requirements. Here we look at the best Fujifilm X-Mount lenses, starting with the standard zoom lens, or kit lens.

The XF 18-55mm F2.8-4 R LM OIS, for example, makes a great first lens, covering an effective focal length range of 27-82.5mm, but the XF 16-55mm F2.8 R OIS WR is an excellent upgrade or alternative, offering a wider focal length range (effectively 24-82.5mm) and a constant maximum aperture of f/2.8, which means the exposure doesn’t change as you zoom.

In addition, the 16-55mm lens is weatherproof, making it a better choice for photographers who don’t mind a bit of rain.

The XF 16-80mm F4 R OIS WR is another appealing alternative as it gives greater telephoto reach albeit at the expense of a stop off the maximum aperture.

Covering an effective focal length of 15-36mm, the XF 10-24mm F4 OIS WR is a great choice for landscape photography, plus it has a constant aperture of f/4 and is weather-resistant. It also weighs just 385g and feels great on an X-T4 or X-S10.

However, if you want to travel even lighter, there’s the XF 14mm F2.8 R, which has an effective focal length of 21mm and weighs just 235g. As a prime lens, it has a distance scale which is useful for hyperlocal distance focusing.

However, if you’d like something bit more affordable, take a look at the XF 16mm F2.8 R WR which has an effective focal length of 24mm, weighs 155g and retails for around £339.

Fujifilm offers several lenses to suit portrait photographers. The cream of the crop is the Fujinon XF 50mm F1.0 WR, a fabulous lens with an equivalent focal length of 75mm and the ability to deliver wonderfully blurred backgrounds so your subject stands out. However, it retails for almost £1,500 and many photographers are likely to prefer the smaller and more affordable XF 56mm F1.2 R (£849) or XF 56mm F1.2 R APD (£1,099).

Nobody does it better:

Best for connecting to smartphones