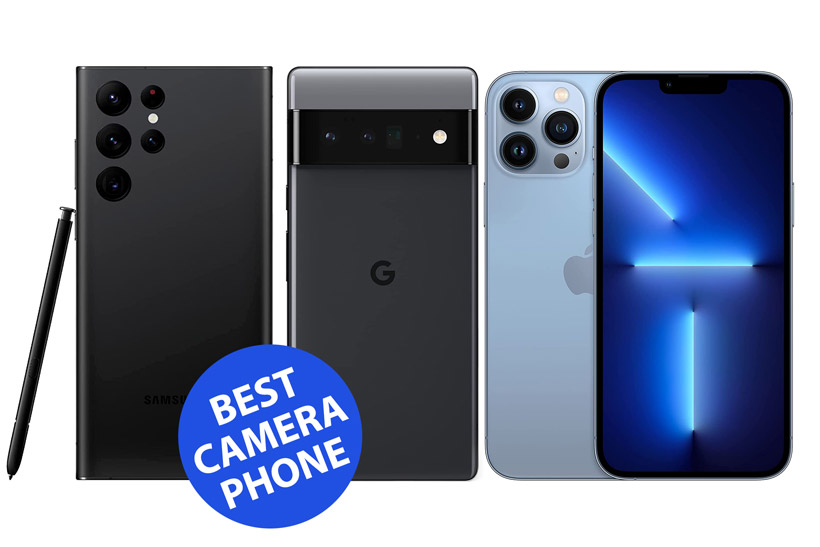 If the best camera is the one you always have on you, for a lot of us it will be the smartphone. Indeed, camera performance and image processing have become a major selling point for smartphone makers, with the bigger ones vying to put Canon, Nikon, Fujifilm and the rest out of business. That’s an exaggeration but there is no doubt smartphones are getting better and better for taking quality images, rather than just snaps, with smartphones now offering a wide range of lenses on the back. With this mind, here’s a round-up of some of the leading contenders for the best camera phones for photography, as well as some of the older models for those wanting to save money.

“Images directly from the camera are very good, with vibrant and bright results produced by the standard “Photo” mode and images with good scope for editing produced by the “Pro” mode. Other shooting modes, such as Portrait and Night mode also produce good results.”

Read our full Samsung Galaxy S22 Ultra review to see what the smartphone is cable of.

The Apple iPhone 13 Pro offers an improvement over the iPhone 12 Pro, with brighter lenses, a new 2cm macro mode, and more telephoto reach. All cameras feature image stabilisation, and there’s a new cinematic video mode. If you’ve wanted to shoot macros with an iPhone, or interested in video recording then there’s a lot of reasons to choose the iPhone 13 Pro.

“When shooting stills, the iPhone 13 Pro does a great job of identifying the subject and focusing on it quickly even in very low light. It also manages create natural-looking shallow depth of field effects in many instances, even dealing with fuzzy subjects like fur and hair effectively in many cases.”

Read our full iPhone 13 Pro review to see what the smartphone is cable of.

The Google Pixel 6 Pro has some impressive motion shot modes, which includes the ability to shoot Action Pan, and Long exposure shots, such as light trails, or blurred waterfalls, all through the power of computational photography. It also offers an ultra-wide, wide-angle, and telephoto camera giving a 4x telephoto zoom option. You’ll also find the impressive night mode, as well as an astrophotography mode that can give great results. The Google Pixel 6 Pro is great value for money as well, only beaten for value, by the Google Pixel 6. One area where the Pixel 6 and 6 Pro could be improved is in terms of manual controls, with no “Pro” mode being available.

“The Pixel 6 Pro is the most pleasing Android device to capture images on and in the rare scenarios where it doesn’t surpass the competition, it at least holds its own. If you’re a keen photographer and want a device that will help you capture beautiful images in a range of scenarios, any time of day, the Pixel 6 Pro is very hard to beat.”

If you don’t need a 4x telephoto camera, and don’t mind using the 2x digital zoom offered by the Google Pixel 6, then you can save yourself a lot of money with this smartphone. It still offers all the impressive computational modes as the Google Pixel 6 Pro, including motion blur (shown above), but using just the ultra-wide and wide-angle cameras. Like the Google Pixel 6 Pro, the Pixel 6 lacks a “Pro” mode and the macro focus could be better.

“Overall, the Pixel 6 takes excellent images, on-par with flagship smartphones costing nearer £1000. Yes, you miss the telephoto camera on most other premium flagships, however, if you can live without this, you’re making an impressive saving, as well as benefiting from some of the most impressive computational photography features seem on any camera, let alone a smartphone.”

The Samsung Galaxy S21 Ultra is an impressive flagship phone that takes great pictures, and with four camera modules you get a really useful range of cameras, including a short zoom as well as a longer zoom, something you don’t see on many smartphones. The camera makes it easy to get great results with automatic scene recognition and automatic image processing, but if you want to, you can shoot in Pro mode where you’ll find manual controls, plus raw image options. As pocket cameras go, the S21 Ultra is difficult to beat.

Unlike previous years, Apple’s top-tier iPhone models (iPhone 12 Pro and 12 Pro Max) have slightly different camera set-ups. Most people are arguably more likely to go for the iPhone 12 Pro, since its smaller size makes it easier to use and fit in your pocket.

The sensor behind the 26mm lens is also slightly larger for the Pro Max version and benefits from sensor-shift optical image stabilisation. As we’ve experienced previously, Apple keeps things simple with its native camera app, not affording a huge amount of control to the end user.

However, it has introduced Apple’s ProRAW format allowing you to record DNG files directly from the native app for the first time. A useful feature of the native camera app is the ability to see what’s happening outside of the frame by utilising the ultra wide and wide cameras. Also carried over from the iPhone 11 Pro series is Night mode, which continues to put in an impressive performance, now adding the ability to blend together Portrait and Night mode.

There will be plenty for whom Apple is the only logical choice if they are already tied into the overall Apple ecosystem, but it has to be said that the phones do the job extremely well. Although you don’t get a huge amount of control over your shots, it does such an excellent job you may not feel particularly aggrieved by that.

Image quality is fantastic, and despite the technical differences between the two Pro models, the differences are extremely difficult to spot in real-world shooting – so essentially it comes down to your preference regarding size.

The standard sensor will output shots at a more sensible 12MP resolution unless shooting in a special mode. Samsung phones have well-featured and in-depth native camera apps. You can choose to shoot in a straightforward point-and-shoot mode if you wish, but there’s also an extensive Pro mode which gives you control over settings such as ISO, shutter speed and exposure compensation.

Aperture is fixed on all three lenses. It’s also in Pro mode that you can shoot in raw (DNG) format, giving you better scope to adjust your images later down the line. Disappointingly however, you can’t use anything but the standard lens – nor can you shoot in 108MP – when using Pro mode, which takes away some of its flexibility.

The Note range gets its moniker owing to the included Stylus, that’s tucked away into the base of the phone. It can be used as a remote control, which is helpful for selfies and group shots. Good images are produced by all three lenses of the Samsung Galaxy Note20 Ultra, but it’s worth sticking to the optical constraints of the telephoto lens.

The 10x digital zoom can be relied upon if the 5x optical isn’t quite enough. The maximum 50x zoom really is best avoided, however. Otherwise, there’s a good Live Focus option for creating shallow-depth-of-field effects, while Night does a decent job when light levels drop too.

It took a while for Google to add a second camera to its Pixel range, and now we find ourselves waiting for it to add a third. This time around however, Google has swapped the telephoto lens of the Pixel 4 for an ultra-wide one, a compromise which is perhaps not surprising considering this is the cheapest model of the group.

The fully automatic Camera option works as a basic point and shoot, and although it does what it does very well, with no option to adjust settings it’s hard to truly see it as an advanced tool. On the plus side, raw format shooting is available so you can make some tweaks after the fact, rather than before, if necessary.

Aside from the standard Camera mode, you also get a Portrait mode for shallow-depth-of-field effects, plus a Night Sight mode which, like the Pixel 4 before it, delivers fantastic results. If you’re just looking for something which is pocket-friendly and does a good job at a reasonable price without fuss, then the Pixel 5 is a solid option.

Its images contain plenty of detail and good colours, while the Portrait mode continues to impress, even with non-human subjects. Both of the lenses put in a good performance, but it’s the standard lens which produces the best results. Digital zooming is best avoided, as the results lack detail. It’s worth noting that this year, there is no ‘XL’ version of the Pixel, so those who like their phones to be on the larger side may be a little disappointed.

OnePlus built its reputation on mid-priced mid-range smartphones. With the 8 Pro, it has steered itself more towards the premium end, and while it’s still cheaper than the likes of the iPhone and the Samsung, this puts it in the ‘luxury’ market.

Again, you get a triple-lens set-up which gives you a 14mm f/2.2 ultra-wide camera, a standard 25mm f/1.8 lens and a 75mm f/2.2 (3x) lens. The wide and ultra-wide are backed by 48-million-pixel sensors, while the zoom offers 8 million pixels. There’s also a fourth ‘colour filter’ camera, but it’s not one you can actually select to use.

The native OnePlus camera app is similar to the Samsung’s, in that it has a good selection of modes. By default, it will shoot in the standard and straightforward Photo mode, while you also have the option to use modes such as Nightscape and Portrait. There is also a Pro mode which gives you access to settings such as ISO, white balance, shutter speed, exposure compensation and more.

With this, you can also shoot in the raw DNG format, as well as elect to record 48-million-pixel JPEGs – rather than them being output at 12 million pixels as standard. Settings such as switching on a histogram to use while in Pro mode can be accessed via a deeper settings menu, and emphasise the type of audience that OnePlus is trying to reach with this model. Images captured by the OnePlus Pro 8 are good, with lots of detail and bright colours.

It copes well with a variety of different shooting settings. The Nightscape model also copes well with low light, while the Portrait mode does a good job with shallow-depth-of-field effects. All three lenses put in a decent performance, but it’s definitely the telephoto which is the weakest of the three. So if you can stick to the standard or ultra-wide lenses, you’ll be rewarded with the best shots.

Using a smartphone for Street Photography