Beautiful New Species of Jellyfish Photographed 2,300 Feet Under the Sea 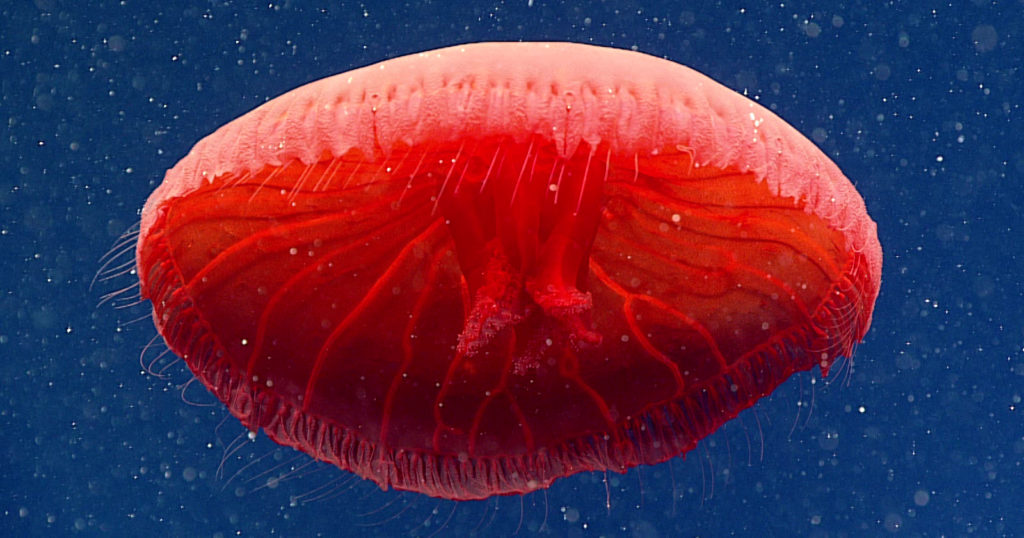 As part of a 2021 North Atlantic Stepping Stones expedition, what is called a potentially “unknown” or “undescribed” red jellyfish in the genus Poralia was captured on camera. The disk-shaped red jellyfish was found floating nearly 2,300 feet below the surface.

An “undescribed” species is the term scientists use to classify a creature that has never received a specific name in a formal scientific publication and is, therefore, previously unknown to scientists.

Quinn Girasek, an intern and National Oceanic and Atmospheric Administration (NOAA) Hollings Scholar with the NOAA Ocean Exploration organization describes the find as part of her role annotating the water column dive that took place in late July.

“As a Hollings intern, I am conducting research to further our understanding of previously unexplored ocean habitats,” she explains. “My project this summer focuses on the abundance of organisms within the mesopelagic, or twilight zone (200 to 1,000 meters/ 656 to 3,281 feet depth) in the Atlantic Ocean around the Gulf Stream and within the deep scattering layer.”

The red jellyfish is one of the species that Girasek cataloged as part of her research. This beautiful red creature in the genus Poralia is described as one that may be a previously unknown species and was seen during the third transect of Dive 20 of the 2021 North Atlantic Stepping Stones expedition, at a depth of 700 meters (2,297 feet).

In the image below, the remotely operated vehicle (ROV) Deep Discoverer is shown collecting the potentially new species of jellyfish, which also gives a sense of scale to the creature. For reference, the ROV is 10 feet long, 6.5 feet wide, and 8.5 feet tall.

Deep Discoverer is capable of diving to a depth of 3.7 miles (6,000 meters) and can capture high-definition video and uses a set of 20 LED lights to fire 150,000 lumens of light into the darkness of the ocean’s depths.

The final dive of the 2021 North Atlantic Stepping Stones expedition was dedicated to the exploration of the water column within Hydrographer Canyon through two series of transects. The first series involved transects at depths of 300, 500, 700, and 900 meters (984, 1,640, 2,297, and 2,953 feet) and the second series started with a transect within the bathypelagic or midnight zone of the ocean at 1,200 meters (3,937 feet) depth and was followed by a transect at a depth of 630 meters (2,067 feet), within the area’s “deep scattering layer” (DSL). The DSL is a region in the water column where there is such a high density of marine organisms that they generate their own sonar signal.

The “deep scattering layer” is a term used by those using active acoustics in the open ocean as a phenomenon that occurs between about 400 and 600 meters (1,312 to 1,969 feet) depth in our geographic region of study. As described by NOAA Hollings Undergraduate Scholar Herbert Leavitt, typically this layer is seen when the sound waves come into contact with a high density of mesopelagic fish or other organisms that live at depth during the day and migrate towards the surface at night to feed.

Many other creatures were observed during the expedition, and while the red jellyfish is the only one that is called out as “undescribed” or undiscovered, there are a host of others that can be seen in detail in images and video from the NOAA.