Are Cameras Actually More Expensive Now Than Ever Before? 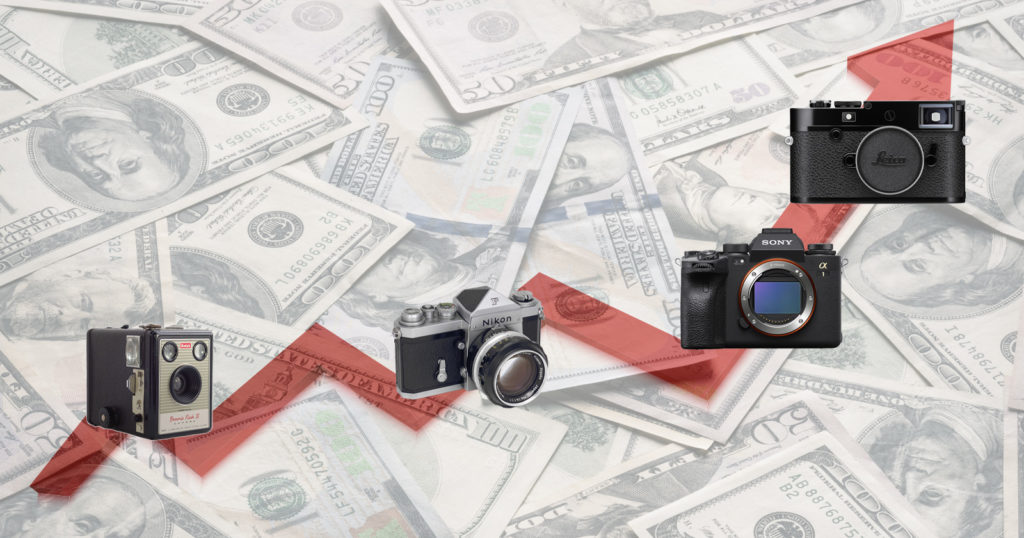 There is a purveying sentiment that cameras have only gotten more expensive over time. While there is certainly some validity in certain sectors of the market, the truth about camera prices over time is a bit more nuanced and complex than the average person makes it out to be. So, let’s take a look.

Please note that all prices are adjusted for 2021 inflation unless otherwise stated.

A Century of Film

While the first practical photographic process, the Daguerreotype, was invented nearly two centuries ago, for our purposes we are going to focus on commercially available cameras — cameras that were accessible and pragmatic for the average person to own. The first camera that falls into this category would be the original Kodak Brownie, released to the public by Eastman Kodak in 1900. Not much more than a cardboard box with a simple meniscus lens, the Brownie was heavily marketed to children, primarily as a method to sell rolls of Kodak film (117 film, originally). Its original price of $1 (equivalent to $32 today) made it both commercially and financially successful.

The following year, Kodak launched the Brownie No.2 — the first camera to use 120 film — which remains the medium-format standard to this day. Its price of $2, equivalent to about $63 in 2021, and appeal to both children and adults, might make it the vintage equivalent to today’s Fujifilm Instax cameras.

The introduction of 35mm film to the masses occurred in the 1930s and quickly took off as an incredibly popular, affordable, and portable alternative to the medium and large format cameras of the era. The Argus C3, released in 1939, became one of the most popular cameras of all time, selling over two million units — it was also widely used by American World War II photographers such as Robert Capa. Retailing for the 2021 equivalent of $675, the Argus C3 might be seen as an early, analog version of current cameras like the Olympus E-M10 Mark IV or Canon M50 Mark II.

Between 1930 and 1960, we saw a rise from one billion photos taken per year to three billion — a 200% increase. The following decade, from 1960 to 1970, saw a 233% increase to ten billion photos per year — the largest percent increase of the 20th century. This sharp increase came on the heels of the SLR revolution and a massive increase in the number of manufacturers which produced everything from entry-level cameras to professional-level ones. The Nikon F in 1959 was arguably the most notable spark of this fire, which retailed for an adjusted price of $3,350. Cheaper cameras of the same year — the Minolta SR-2 and Canon Canonflex — sold for an adjusted $2,300 and $2,775 respectively.

By the late 1980s and early 1990s, things had shifted somewhat — at least for certain segments of the marketplace. The autofocus-enabled, flagship Nikon F4 sported an adjusted price of $5,700 — significantly closer to modern Canon or Nikon DSLR flagships. By this point, however, compact cameras were exceedingly cheap — $150 for a Canon Sure Shot Max and $102.98 for a Minolta Freedom 50.

Unlike today, the vast majority of sales were at the low end — compacts and entry-level SLRs.

While the first DSLR came to market in 1991, it wasn’t until about the year 2000 that digital cameras finally became semi-affordable and realistic alternatives to film. The Nikon D1 is generally considered the landmark camera that turned the tide from expensive Kodak DCS digital cameras to sub $6,000 offerings — the Fujifilm S1 Pro was also released in 2000 and was even more affordable.

While the prices for high-end Nikon and Canon models have either dropped or stayed quite steady, we have seen significant changes in other areas. Most notably, the highest end of the market — which historically has been medium format — has undergone significant downward shifts in the past decade.

Contrast 2002’s Hasselblad H1D at an adjusted $26,900 to the Pentax 645D eight years later — the first medium format camera to dip below the $10,000 (unadjusted) threshold. In 2014, the successor Pentax 645Z premiered at $8,500 and within just two years we saw the release of the Fujifilm GFX 50S at $6,500 and the Hasselblad X1D 50C at $8,999. Yet another two years later, the GFX 50R marked the first medium format digital camera to be released with an MSRP under $5,000 and the following year Hasselblad’s X1D 50C II debuted at $5,750 — $3,250 cheaper than its predecessor. And, most recently, we have seen the release of a 100-megapixel mirrorless medium format camera featuring IBIS and phase detection autofocus for less than the cost of the Sony Alpha 1 or flagship Nikon or Canon.

Full-frame digital saw the same phenomenon in the past decade — 2013’s Sony Alpha 7 was the first full-frame camera to be released under $2,000. Subsequently, 2019 saw the Canon EOS Rp dip below $1,500 followed by the Nikon Z5 in 2020. These figures are unadjusted for inflation, making the idea that cameras are more expensive now even more of an odd proposition.

What is true, however, is that we have seen a rise in more expensive lenses, like the Nikon Z 50 f/1.8 — or, even earlier, the Sony Zeiss 55 f/1.8 which was released alongside the Sony Alpha 7 and Alpha 7R.

I believe the same factor driving the prices of high-end cameras downward is also responsible for the absence of cheap, name-brand glass. After all, we do still have incredibly affordable (and excellent quality) lenses from companies that not too long ago were seen as significantly worse than first-party optics — Tamron, Sigma, Tokina, Rokinon/Samyang. Even lenses from companies like Yongnuo or Viltrox have recently become well-known for image quality and the ability to punch far above their price class.

As the maturation of the smartphone camera has decimated the bottom end of the camera market, manufacturers have been forced to pivot and focus resources on serious photographers, whether amateur or professional. And as technology has pressed forward, those photographers have sought more and more and more — more dynamic range, more resolution, more frames per second, and so on. Whether or not most people even need these improvements is irrelevant — it is what people want.

And along with that naturally comes the demand for lenses that can live up to the ever-increasing demands of modern sensors, even at ultra-fast f/1.2 apertures. To complicate matters, the mirrorless revolution has driven the desire for smaller and more compact glass. Gone is the time where massive f/1.4 prime lenses like the Sigma Art DSLR line are accepted with open arms. All of this necessitates significantly improved lens designs, superior glass and coatings, precision manufacturing, and increased quality control.

The upshot is, while a lens like the Nikon Z 50 f/1.8 is more expensive than its F-mount counterpart, it is also one of the sharpest, most finely corrected 50mm lenses ever made. This Nikon lens is only one example — the same remains true of Canon’s new RF lenses, Sony’s phenomenal G Master line, Fujifilm’s APS-C offerings, and others. We are consistently seeing mirrorless lenses that outperform their DSLR ancestors, often quite significantly.

You have probably noticed that I have not mentioned Leica at all. That is because Leica seems to be the only company to buck the trend exhibited by everyone else — not only are its digital cameras significantly more expensive than its cameras of the past, but its lenses are also selling for quite the premium.

Contrast that to the Leica M10 in 2017 ($7,250 adjusted) and the current price of a new Noctilux at a whopping $12,795. In fact, a brand new Noctilux 50mm f/1.0 purchased in 1986 would actually have significantly appreciated in value, even including inflation.

The reason for the disparity between Leica and virtually everyone else comes down to the difference between prestige pricing (Leica) and parity pricing (everyone else). The concept of parity pricing is one of competition — you price a product at or less than that of a rival to remain competitive. We have consistently seen manufacturers undercutting each other’s prices — a clear example of this was seen in the medium format arena once Fujifilm entered.

Premium (or prestige) pricing is built on an entirely different model — there are no competitors, so prices can be pushed as far desired, at least until diminished sales begin to outweigh the additional revenue.

So Why Do People Think Cameras Are More Expensive Now?

There are a few factors at work, I believe, that cause consumers to assume or believe that cameras are more expensive than they were five, ten, twenty, or fifty years ago.

Firstly, it is extremely difficult to account for inflation without actually looking at real figures. Most people do not realize that $2,000 from just five years ago is worth $2,250 today. The same figure ten years ago is equivalent to nearly $2,400. We do not generally consider the effects of inflation over such short-term periods, but it does put things in perspective.

Secondly, we have seen a contraction inward of prices — the highest end (medium format) has dropped significantly, while the lowest end has largely disappeared (and therefore appeared to move upward). While we once considered something like a Nikon D5600 to be an amateur level entry point, we now see cameras like the Nikon Z50 or Fujifilm X-S10 in the same way — both significantly more expensive, though also offering newer, more advanced technology.

Finally, with the rise of mirrorless technology and the significant decline of DSLR sales, many of the cameras and lenses we see on the market are quite new. Whereas previously you could have purchased a 24-70mm f/2.8 DSLR lens that may have been on the market for five or more years — and thus almost certainly cheaper than its launch price — most of the options now are comparatively very new. A good number of older Sony FE lenses are marked down from their original price, but we do not see that much with Nikon Z or Canon RF lenses, and even those mirrorless lenses that are five or more years old are not as desirable, either due to image quality or factors like inferior autofocus motors. The relative “newness” of everything, especially the most desirable products, alters consumer perception.

There is one thing that is impossible to deny: the value-based pricing of modern cameras. Camera technology has never been more capable or feature-packed than it is today. Perhaps there is no clearer example of this than the Fujifilm GFX 100S which launched with a price that was $500 less than the GFX 50S — yet it has twice the spatial resolution, includes in-body image stabilization, phase detection autofocus, and so on.

Photography has never been more accessible or more capable, and this year will see 1.44 trillion photos taken across the globe. In the year 2000, 86 billion were taken, making for an increase of 1,574% in the last 21 years. Whether it’s the phone in your pocket, a $500 Micro Four Thirds with a kit lens, or a $6,000 medium format camera, the potential has never been greater or more affordable.