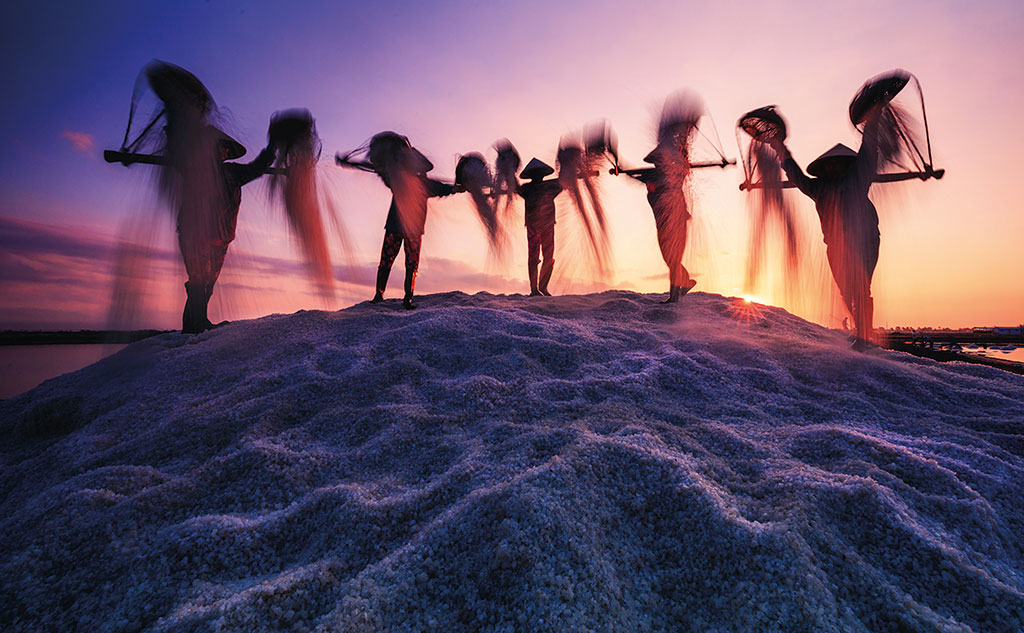 Here are the top ten images uploaded to Photocrowd from Round Six, Movement, with comments by the AP team and our guest judge, Ben Hall. Be sure to enter the current round on Travel, which is open now.

The most exciting thing about a theme such as movement is the scope it gives for creativity and shooting styles. A split-second capture of a fast-moving animal and a long exposure of a seascape both represent movement, but in completely different ways. Then there are the worlds of sports photography and candids, too.

Panning, fill-in flash and intentional camera movement are all techniques that can be deployed to effectively capture a sense of motion and action. What links our top 10 images from this round is the simplicity of their compositions. Movement is definitely a theme where less is more, as too much detail can result in confusion.

Guest judge Ben Hall says: ‘This is a beautiful image which symbolises the competition theme of movement perfectly. The chosen shutter speed has rendered motion in the people and falling salt, but not to the extent that they are unrecognisable. This portrayed motion also lends the image an air of mystery.

A wide focal length has captured the scene in its entirety, providing context and showing the relationship between the people and the landscape. The patterns in the foreground lead the viewer’s eye through the frame to the people, and then beyond to the dazzling sky. The sun itself provides a key part of the composition, appearing close to the right hand third and bursting over the horizon with a well-executed sunburst effect. Overall, a stunning image and a worthy winner.’

This is an image that draws the viewer deep into the frame, leaving us feeling as if we are surrounded by the flying sanderlings. There’s no focal point to the composition, but it doesn’t need one, as much of the aim of a shot such as this is to replicate the sense of chaos and confusion there must have been at the time.

Restricting the colour palette to only black, white and green keeps things coherent, and there is just enough sharpness within the movement to know exactly what

it is we are looking at.

There is a huge confidence to this image that really makes it stand out. Even to see the potential for such a shot in the first place is to be applauded, because many of us would simply walk past it. Angela created this abstract by panning her camera during a long shutter speed, thus capturing the lights along the shore of this fjord.

The deep, velvety tones of blue merging into green are simply gorgeous, leaving the viewer in no doubt that they are looking at a seascape. The curve of the lights does a great job of dividing the scene into two, without being too harsh. We’d like to see this one printed to at least a metre wide and hanging on a wall.

A beautiful and hugely imaginative composite from Bogdan. It’s the kind of image where it’s possible to observe something new each time you come back to it. The viewer feels as if they are seeing deserts, seascapes and sunsets among the abstract lines and tones, when in fact (stop reading if you don’t want a spoiler) what we are looking at is nothing more exotic than passing lorries.

For consistency, Bogdan used the same focal length and shutter speed for each image. If this sequence doesn’t demonstrate that there is beauty in everything, then nothing will.

We see this technique – which entails capturing puffs of flour at just the right moment – quite often in APOY, but this is a particularly good example. The model’s pose is very pleasing, particularly the fact that he’s poised on his toes. The lighting is excellent, too, with beautifully balanced light and shade areas, and capturing the translucency of the flour very well.

You can almost hear the thrum of these wild Arabian oryx’s hooves as they bustle past, on their way to who knows where. Shooting at 1/4sec and panning as they trot has captured just the right level of movement.

We can imagine the speed at which their legs are moving, but there’s just enough sharp detail to balance out the scene. The processing does a good job of highlighting the harsh desert conditions in which these creatures live.

Here we have two moving elements coming together in all their natural drama. First, the calving glacier creates a huge impact, and then it causes the flock of seabirds take flight in response. The moment has been captured very well.

The black & white conversion brings out the textures of the glacier extremely well, although there was some discussion between the judges, with one or two saying they would have liked to see it in colour. Either way, it’s an atmospheric scene that captures the brutality of nature effectively.

This is a superb action shot of a moorhen racing across the water, apparently defying gravity. Everything about this image has come together beautifully, from the splashes the bird is leaving in its wake, to the separation between the outstretched wing and the bird’s head, to the claws being just clear of the water.

It’s all topped off by the backlighting and the gorgeous clean background, which means our attention goes straight to where it’s supposed to.

This is another great example of a shot that captures movement, but without a hint of blur to be seen. The effort on the young boy’s face is what jumps out of the frame, as does his flying hair and dynamic pose.

Shooting from a low angle has heightened the sense of energy, and the wideangle focal length was a good choice. The background is perhaps a little cluttered, but overall it’s a fun, lively shot.

There’s something of the Jack Vettriano about this capture. The way the light, the composition and the anonymity of the two figures as they walk across the sand come together makes for a very pleasing whole.

The green and blue tones give it a rather sombre atmosphere, as opposed

to a warm one, but that makes it all the more intriguing. It’s the kind of image that triggers the imagination, making the viewer create a story behind what they’re seeing.

Olly says this image is an updated version of the Harris shutter effect technique, in which an image is shot through red, green and blue filters, with the subject moving between each frame.

It has a pleasingly retro feel to it, and the dynamism of the model has been nicely captured – she looks natural and as if she’s having fun. It’s an imaginative way of capturing the theme of movement and fulfils the brief very well

Angela Lambourn, who received 80 points for her imaginative third-placed image in this round, has leapfrogged Pete Baker into first place on the APOY leaderboard. A number of other photographers, including Pete, are snapping at her heels, so a lot could change over the course of the remaining rounds.

Lucy Monckton, who has been extremely consistent with the standard of her entries, retains her lead in Young APOY. Launceston Camera Club and Royston Photographic Society are managing to maintain their first- and second-placed spots in the camera club rankings, while Bristol Photographic Society move from

The gear our winners used can be found at MPB.

Angela Lambourn’s subtle third-placed image was shot using a Nikon D750. This DSLR, launched in 2014, includes technology from the flagship D810, but in a smaller body. It features a 24MP sensor, 6.5fps shooting and is weather sealed. This superb full-frame camera can be picked up at MPB for £874 for a model in excellent condition, and £784 for one in good condition.

In fifth place, Mike Martin used an Olympus M.40-150mm f/2.8 Pro for his compelling capture. Compact and lightweight, its equivalent full-frame focal range is 80-300mm, making it a highly versatile lens. It’s also dust, splash and freeze proof, and has a minimum focus range of 50cm throughout its range. This desirable lens is available at MPB for £879 in excellent condition, and £789 in good condition.

Alexa Popovich, who was awarded 9th, took her engaging action shot using a Canon EOS 80D. With its 24.2MP APS-C CMOS sensor, 7fps capability and 45 all cross-type AF system, it’s a great choice for capturing split-second moments. This DSLR is available at MPB for £629 in excellent condition and £564 in good condition.