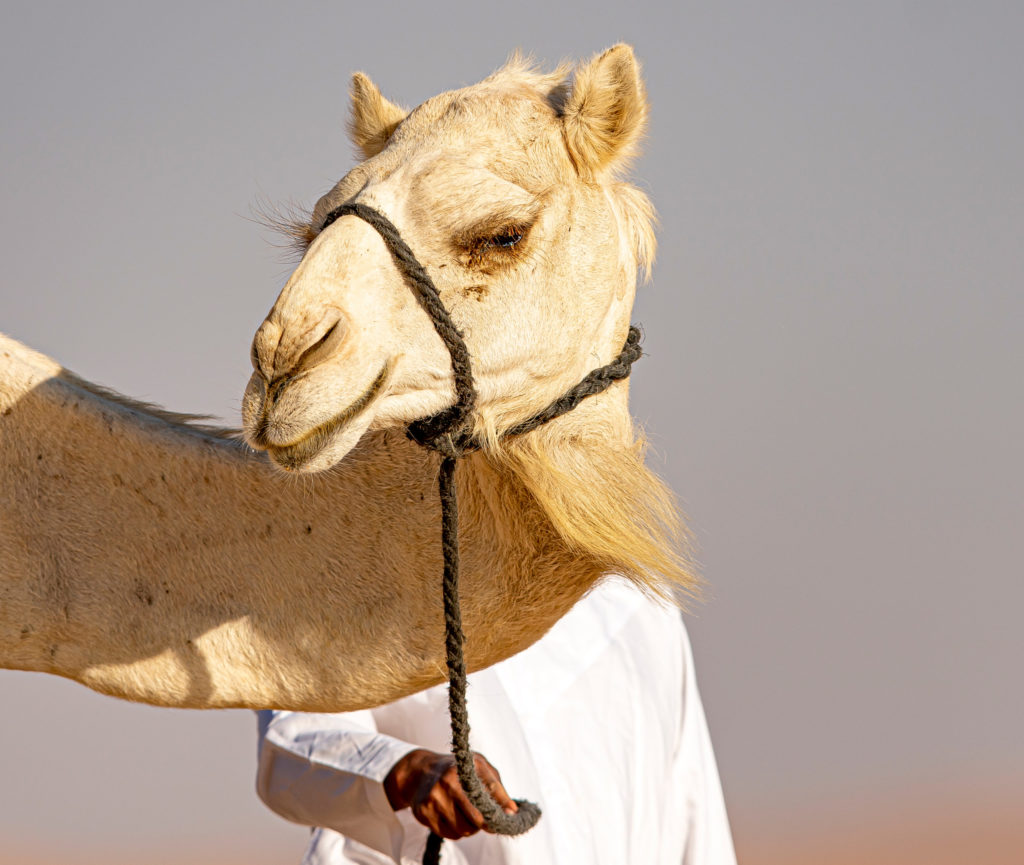 Here are the top ten images uploaded to Photocrowd from Round Seven, Portraits, with comments by the AP team and our guest judge, Natasha J Bella. Be sure to enter the current round on Street, closing 1st October 2021.

Portraiture can be one of the trickiest genres to master, but its vast range makes it hugely satisfying to attempt. The possibilities for a portrait are almost endless. If you tend towards landscape photography, you can shoot an environmental portrait – either in a documentary style or something more creative and abstract.

If you are more technically minded, you might find yourself drawn towards shooting flash in a studio environment. Our top ten entries span the entire range of portraiture, from naturalistic set-ups to stylised, studio-based compositions. While the overall winning image pushes the definition of portrait to its limit!

As can sometimes be the case with winning images, there was division among the judges about this striking and humorous shot by Nawfal. Some felt it wasn’t a portrait at all, while others instantly knew it was their personal favourite and pushed the boundaries of what it means to create a portrait. Both timing and composition are spot on here.

The placement of the camel’s head couldn’t have been improved, while the inclusion of the handler’s hands has been carefully managed. The light is glorious and the completely clean, soft background means our attention goes squarely to the camel and the man behind it.

As for the debate about whether or not it’s a portrait? For us, it’s a witty take on the man-at-work theme, and speaks volumes about the relationship between the two subjects.

Guest judge Natasha J Bella says: ‘A heartwarming and sincere portrait by Ian that draws you in. I got a feel for Eric’s comfort, contentedly sitting in his throne with his immediate needs within arm’s reach, in a cosy room with years of memorabilia that represent his life and many stories.

Although it is quite a dark image, the lighting from the floor lamp illuminates Eric enough to make him the focal point and minimises the distraction from everything else in the room. It was a good decision to use additional light to lift his right-hand side.

‘I really like the subtle blue lighting coming from the kitchen doorway. I initially thought it was from a TV, which gives context to what Eric is looking towards, especially since there is a TV guide nearby.

‘You might have chosen to crop in tighter, especially from the bottom of the image, but I really like it as it is. The artistically chosen angle and composition gives great depth to this warm and homely photo, so full of character.’

Here, we have another take on the relationship between man and beast, with a very different treatment to that of the first-placed image. Christine has gone for the studio-based approach, creating a highly skilled composite of her friend Shawn and his bearded dragon, in which she has blended two images.

The lighting is excellent, as is the placement of the bearded dragon in the frame. Tonally, the whole thing is very pleasing, too, with the backdrop complementing the natural tones of the bearded dragon’s scales. The alteration of Shawn’s eye to match that of his pet is a delightful and clever finishing touch.

With portraiture, it can be all too tempting to go over the top with pose, lighting, composition or all three – and more – ending up with a confusing mess. This gorgeously classic portrait by Alistair demonstrates the old adage that less is more.

The side-on pose of his model, looking directly at the camera over her shoulder, needs to be no more complex than it is. The lighting is sublime, with the soft highlights and subtle shadows all falling in exactly the right place.

Everything about it is lovely – right down to the subtlety of her hair, makeup and choice of top, which keep things timeless without being dated.

Taking pictures of young children is one of life’s greatest challenges – it’s definitely not for the faint-hearted. But when it works, it works beautifully, as this shot by David demonstrates.

Shooting the two girls in profile ensures their attention is on each other and not the photographer, which keeps it nicely natural – despite the fact they would obviously have been directed by David.

Converting to black & white means the girls’ skin tones are lovely and soft, and even the negative space created by the plain black backdrop is well considered.

Some portraits are spontaneous, capturing a moment, while others are created with a very clear concept in mind. This is a case of the latter. It’s different from anything else we saw in the entries to this round, and has been well thought out.

The blue paint is almost tribal in its application, while the angle of view, shooting just below eye level, gives her a sense of strength and power. That she is looking out of frame, perhaps at an incoming enemy, adds another level of intrigue. A nicely conceived idea.

A quirky and characterful portrait that instantly makes the viewer want to know more about the subjects. It deserves praise for being one of only two images in the top ten that features more than one person, making it much more of a challenge to shoot, but Malcolm has succeeded in creating a pleasing connection between the two.

Their expressions make them appear as if they are sharing a joke – something that is emphasised by the fact that only the man is looking at the camera. The connection is created in a physical sense, too, with the holding of the tie.

There’s something quite mesmerising about this portrait; it’s one of those images that encourages the viewer to return to it many times, each time appreciating something new.

The model’s pose has been well directed, designed to show off the impressive pieces of jewellery but without allowing them to dominate. The lighting is superb, and has allowed the photographer to capture a fabulous range of tones, while keeping the overall effect low-key. There’s a lovely softness to the model’s expression that suits the overall atmosphere of this very pleasing shot.

Dominic created this magical and ethereal underwater shot during a remote shoot that took place in lockdown. The set-up was in a studio, but the camera and lights were controlled via Dominic’s laptop at home.

It’s an impressive achievement under what must have been very strange circumstances. He has captured the sense of the model falling backwards through space – the viewer can almost feel the silence. The light streaming in from the top is sublime, and completes the atmosphere.

Working with animals can be unpredictable and frustrating, but it’s always worth persevering, as this lovely moment, captured by Steve, demonstrates.

It would have been easy to have the woman standing next to her horse, but there’s something about the interaction with her crouching down that makes it more pleasing, both in terms of the connection between them and compositionally, too.

There’s no way this image would have worked as well in colour. The black & white conversion helps us appreciate the horse’s dappled coat, and there’s no extraneous colour to distract the viewer. Lovely work.

Victoria’s winning image is a masterclass in how to create balance in a photograph. Most noticeably, there’s the echo between the woman’s purple clothing and the solitary orchid on the nest of tables next to her.

Then there’s the repetition of the many square shapes in the frame. And then we have the triangle, with our eye going from the woman’s face, to the orchid, to the painting on the wall, before resting back with the grey-haired woman.

The natural light is subtle and soft, and all the judges found themselves wanting to know more about the subject’s story. A worthy winner indeed.

Launceston Camera Club have maintained their lead, jumping from 200 points last round to an impressive 330 points this round. It’s due in part to Ian Smith’s second-placed image, but also to those photographers who have scored ten points for their shortlisted images, of which John Davey is one, with his nicely executed portrait.

He has directed the model well, and given the image a boudoir feel without it being tacky – which is sometimes an easy line to cross. The processing is beautiful, making the overall image ageless in its appearance.

There’s been another shift at the top of the leaderboard this round, with Mike Martin jumping from equal third to first place, thanks to the 40 points he was awarded for his eighth-placed image.

However, with only 60 points separating the first and tenth-placed photographers, it could all still change. Lucy Monckton and Muhammad Hossain are fighting it out for the top spot in Young APOY, with both being 140 points ahead of third-placed Hugo Begg.

Launceston Camera Club’s approach of encouraging as many members as possible to enter APOY this year is paying dividends, and they are currently 140 points ahead of their nearest rivals.

To see more images from APOY Round 7 and Young APOY, visit www.amateurphotographer.com/APOY2021

A good standard zoom lens is an essential part of any photographer’s armoury, and second-placed Ian Smith used a Canon EF 24-105mm f/4L IS USM for his atmospheric shot of his friend Eric. It’s robust, and four stops of image stabilisation mean it can be handheld in low light. And, of course, it maintains its f/4 aperture throughout. Pick one up in excellent condition at MPB for £444.

Christine Johnson placed third for her humorous portrait, for which she used a Nikon D850. This all-round camera features a sensor that resolves exceptionally fine detail, super-fast autofocus and silent shooting in live view. This DSLR is available at MPB for £2,089 in excellent condition.