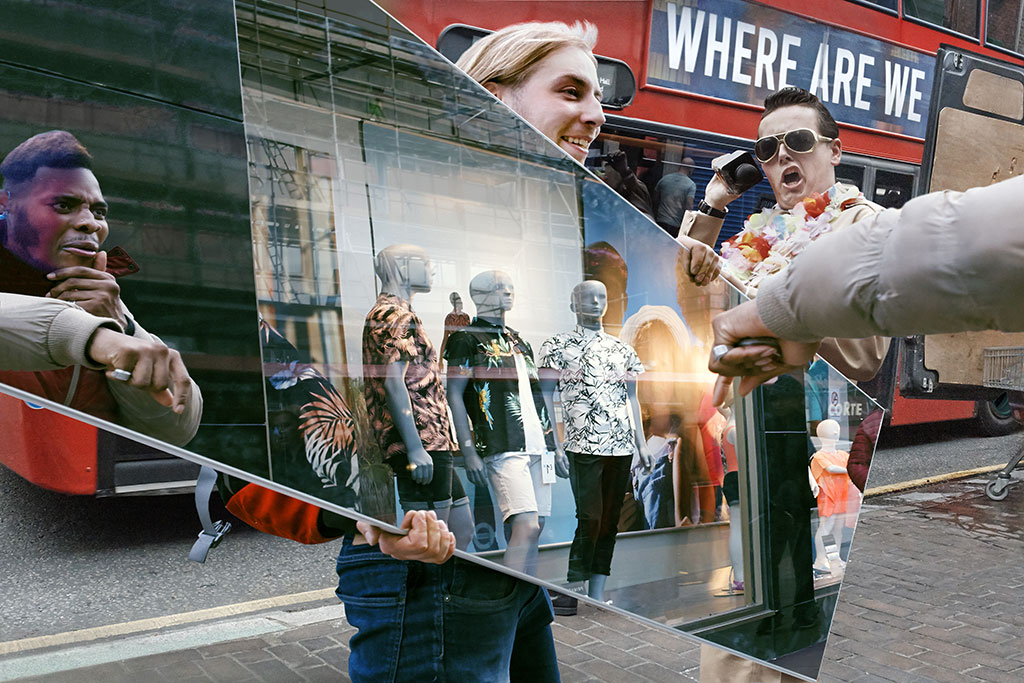 Here are the top ten images uploaded to Photocrowd from Round Nine, Street, with comments by the AP team and our guest judge, Peter Dench.

We live in a time where cameras are often viewed with suspicion, and sadly this can be off-putting for the street photographer. Worrying about whether you’re going to be questioned about your intentions is enough to make anyone put their camera away. Fortunately, however, none of the entries to this year’s street photography round of APOY has been deterred in the quest to capture a great shot, and as always, we have a superb range of styles in our top ten.

From the almost surreal to the classic black & white candid, there is a whole range of sub-genres to explore – so if you didn’t enter this category this year, why not get out there with your camera now, and start building up a set of images to enter in 2022?

It’s important that every picture tells a story, but this is particularly the case when it comes to street photography. What we have in this outstanding winning image by Jo is not just one story, but several, and it raises more questions than answers.

Why is this man carrying a mirror and, more to the point, why is the other man reflected in it looking so bemused? And then we have what looks like an Elvis impersonator… It’s a superbly intriguing and dynamic image in which the composition has come together beautifully in a split second. We wouldn’t change a thing about it. Where are we? You may well ask!

The first thing that stands out about this image is the excellent sense of scale it conveys. The lone figure crossing the concourse has been captured in exactly the right spot and is dwarfed by the surrounding buildings of the Dubai International Finance Centre.

The black & white tones created in the conversion are gorgeous, with both detail and solid blacks in all the right places. The numerous triangles created by the composition and edit contribute towards making this the graphic, slick image that it is.

Who doesn’t enjoy a bit of humour in photography? Photographers such as Elliott Erwitt always spring to mind when it comes to capturing the quirkier aspects of life, and this image is definitely in that genre.

The similarity between the two men, with their short grey hair and ties hanging down, adds to the wittiness, and the viewer is left wondering what it is they’re checking (spoiler alert: it’s an oil leak in the vintage bus). Converting the image to black & white completes the classic look.

Shooting views through windows – particularly those covered in condensation – is notoriously tricky, as often it can result in an incoherent mess. David’s image, however, is a great success. The silhouettes of the two main figures, as well as that of the mysterious one on the left, are well defined and clear, which gives the eye something to focus on straight away.

Immediately, we want to know what they are talking about to make them appear so intent. The solitary glass between them provides a good punctuation point, as does the red neon sign top left. It could almost be a film still.

Some street photographs can appear almost like a choreographed dance, and this image by Nawfal is a case in point. That sense of choreography comes from having a great sense of timing and knowing the split second at which everything comes together.

Here, it’s the cyclist raising their arm, of course, but there’s more to it than that. It also works because the cyclist on the right is in just the perfect spot and is moving to the left, and similarly the two figures at the bottom walking towards each other and being separate from the upright pillars is also important. It has all come together extremely well.

Guest judge Peter Dench says: ‘This photograph by Patrick Reilly is jam-packed with information. My eye continuously drifts across the image from left to right in a circular motion, picking up on new and enjoyable details each time: the fashion, expressions, litter, architecture, gorgeously muted colour and a small horse – what’s not to like?

There are so many angles. With the pavement, incline and buildings, it shouldn’t work but somehow it comes together. It’s a group shot of individuals each lost in their respective moments. A quiet and patient picture that matures with time and tells a story without forcing it.

The natural feel to the image elevates it from the ordinary, and it’s a triumph of observation without technical gimmicks. Sometimes the hardest thing to do is let the content speak for itself. For a picture to make you think, wonder and smile without being sneering can be a fine line and it’s a line Patrick has taken in his stride.’

This is one of those images that works well at first glance, but gets better and really stands up to scrutiny the longer you look at it. The initial response is to appreciate the graphic sensibilities of the composition. All those vertical lines have been extremely well managed and placed just right within the frame.

However, look more closely, and you’ll see the timing of the capture of the figure descending the stairs is spot on, as is the placement of the two tree reflections in the bottom two windows. All of this is only enhanced by the conversion to black & white.

A street photography category wouldn’t be complete without an image taken in the style of the greats of the genre – and this one definitely has echoes of Robert Doisneau or Willy Ronis. The young woman, concentrating on her writing, is apparently oblivious both to being photographed and her juxtaposition with the carved figure behind her.

The way in which the statue’s foot just connects with the woman’s backpack is a great touch that completes the flow of the composition. We would have liked just a little more space at the bottom of the frame, but other than that small detail, overall it’s a great shot.

This elderly man’s stooped posture is what makes this image interesting. While it is obviously suggestive of old age and perhaps discomfort, it also appears to be driving him across the frame from left to right. The blue and white backdrop provides a strong contrast with the man himself, and the way in which he appears to be walking into the burst of light coming from the top left completes a strongly composed frame.

As with our first-placed image, here we have a case of several different stories taking place within one frame. There is a great deal going

on, but at no point does the composition feel confused. This is down to the careful framing and symmetry created by the three archways.

To have moved even a step to the left or right would have thrown everything off balance. The two apparently completely separated photo shoots are anchored by the woman and her dog in the middle, who have become unwitting participants in the ‘choreography’ of the image. Converting the image to black & white also ensures that the complexity of the shot is never confusing.

There were a few examples of coinciding colours in the top ten of Young APOY this round, and this one was voted the best by the team of judges. It’s a deceptively simple composition, but one that works particularly well because the taxi is neatly placed over the zebra crossing.

Exposing so that the figure underneath the umbrella is in silhouette is spot on. Yellow, white and black – these three colours are all that the image needs, and it’s a worthy winner of this category.

It’s been fascinating to watch our camera club category play out in this year’s APOY, and as we head towards the final round, it’s hard to see any group other than Launceston Camera Club winning. But you never know, these things can sometimes change at the last moment.

As with several others, Warrington Photographic Society, of which Christine Johnson is a member, has been there or thereabouts throughout the competition.

Christine’s entry to this round, which shows wit and excellent timing – as well as the value of being out and about with her camera in bad weather – has earned both her and her camera club ten points to add to their overall tallies.

As we head towards the final round of this year’s APOY, things couldn’t be tighter. With only 90 points separating the top ten photographers on the leaderboard, everything could change once the final round is decided. Who will be crowned winner? You’ll have to wait until the results of our Close-up round are published next month to find out!

In Young APOY, things are looking a little more done and dusted, although there’s still a little room for manoeuvre at the top of the leaderboard. As for the camera club category, Launceston Camera Club would appear to be nailed on for success. But there’s still one round to go and we can’t wait to see the overall outcome.

Taking fourth place with his atmospheric night shot, David Boam has made the most of the capabilities of his Fuji XF 18-55mm f/2.8-4R LM OIS lens. This versatile zoom has a range equivalent to 27-84mm in full-frame terms, and a wide f/2.8 aperture throughout.

This, plus its four stops of image stabilisation, makes it the ideal tool for shooting in low light and other challenging situations. You can pick up this lens at MPB for between £264 and £309, depending on condition.

A pro-standard zoom, the Canon EF 24-70mm f/2.8L II USM is what Andrew Robertson used to shoot his seventh-placed photograph. With its constant f/2.8 aperture and superb edge-to-edge sharpness, it’s a lens that can deliver the goods in a wide range of shooting situations. It features a nine-bladed diaphragm, which gives gorgeous bokeh. This lens is available at MPB starting at £759 and rising to £1,319 for a model in like-new condition.

We always say you don’t need expensive kit to take great photographs, and Eric Falk’s tenth placed image is a case in point. It was shot on a Nikon D5100, a DX-format DSLR that features a 16.2MP sensor, an ISO range of 100 to 6400 and a large, swing-out, vari-angle monitor. It’s available from MPB for up to £184 for a model in like-new condition.