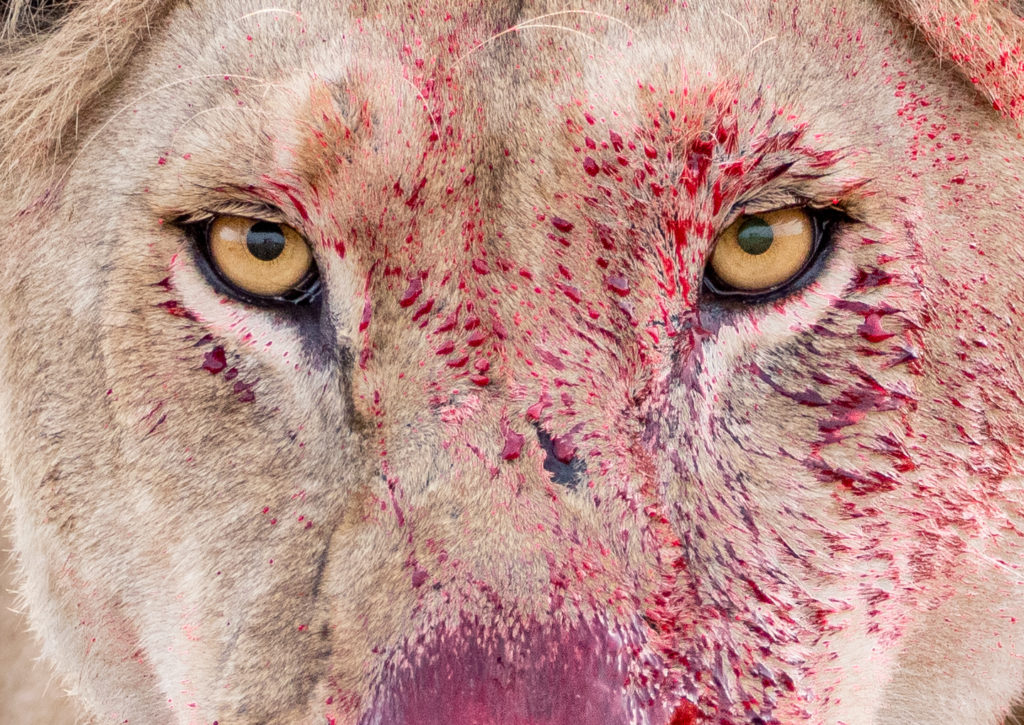 In the summer of 2020 just as the first UK lockdown lifted, Lara Jackson and her partner, wildlife photographer George Turner (@georgetheexplorer) went to Tanzania with safari tour company Asilia Africa. They were tasked with documenting wildlife in the absence of tourists and the wildebeest migration: one of the greatest spectacles on Earth.

Lions are typically known for hunting in prides and it’s not often that a female lion would attempt a kill by herself. But whilst in the Serengeti National Park, Lara managed to capture the moment a young lioness single-handedly took down a fully grown wildebeest and looked up mid-meal.

With millions of antelopes moving through the Serengeti towards the Masai Mara, the sheer number of individuals made the migration a chaotic and overwhelming but incredible experience for Lara.

‘It’s hard for me to even describe. We witnessed so many hunts, the predators were able to snatch an easy meal and numerous river crossings… One lasted for more than seven hours with hundreds of thousands of wildebeest swimming across the river, only to realise they’d reached an island and still had another channel to cross. But the herd decided to swim back to the bank they’d originally left.

So there were wildebeest swimming to this island and turning around and coming back again. It was chaos, the noise was unimaginable, and the worst part is that so many of them died.

In the panic, many broke their legs on rocks in the river or got their legs wedged in rock crevices so they couldn’t move, some were taken by crocodiles, and some were picked off by lions and hyenas when they returned to the original bank. It was pure pandemonium.

I feel so privileged to have witnessed this spectacle, but I’m not sure I could stomach watching it again.’

On approach in Asilia’s specialist safari photographic vehicle, the team saw a lioness pounce and take down a wildebeest. The stability of the vehicle and the drop-down sides allowed Lara to lie down and come eye to eye with the predator.

‘The lioness just put her paw over the body of the wildebeest and gave a really intense stare into the lens of my camera. Unfortunately the kill wasn’t clean and the poor wildebeest was still alive for a while as she started eating. That’s why the blood is so red, it’s completely oxygenated.’

The encounter lasted between five and ten minutes. Lara was using an adjustable Sigma 150-600mm lens and was able to take a range of photographs. This image was taken at 283mm but was further cropped to bring greater focus onto the most impactful part of the encounter: the lioness’s intimidating gaze.

Lara took a range of photographs of the lioness mid-meal. Using her Sony 150-600mm lens

Lara is a conservation biologist but took up wildlife photography by chance during university. Her course gave her the opportunity to travel abroad and, following a six-week trip to Madagascar in 2017, she realised action cameras were useless for getting good shots of wildlife. Upon her return she bought a bridge camera.

She says, ‘I immediately fell in love with the thrill of trying to capture images that portrayed the emotion I felt during an encounter with a wild animal. From hummingbirds, to iguanas, to critically endangered scarlet macaws – the camera did not leave my hand and from that point on I was addicted!

I’ve been taking photos for four years now and what began as a way for me to remember the amazing wildlife I saw on my assignments, quickly developed into a way to raise awareness for conservation.

I set up my Instagram page in 2017 because I realised that wildlife photographers usually shared the technical details of a photo and no one was talking about the wildlife; so I shared my photos with conservation messages that related to my subjects; threats to their survival, how many there were left in the wild, or an interesting fact about them.’

I think the fact that I fell into wildlife photography by accident has made me different. It’s always been about raising awareness of wildlife that I photograph: whether it’s the rhino horn trade and the threat from poaching, human-wildlife conflict in local communities or more positively, sharing a conservation success story.

Looking back at my early photography I’ve improved so much, but photography will always be second to wildlife and that’s why I feel I’m unique!’

Wildlife Photographer of the Year is judged anonymously, but this year out of the 100 selected images only seven were taken by women, reflecting the lack of representation in the field. Despite this, the contest has given first-time entrant Lara a confidence boost to pursue photography full-time. ‘WPY has been eye-opening and mind-blowing… I’ll be forever grateful to the competition.

I never thought my photography would be good enough, so I’ve never entered. However, I gained a lot of confidence because when I first shared the lioness image, it was re-shared by the NatGeoYourShot page and received more than 200,000 likes. I had a huge influx of followers and so many messages from people wanting to buy a print!

I genuinely never thought anyone would ever want to buy, let alone display, my photo, so that was a huge boost of confidence and I decided to enter several competitions because of it. I hope my award will inspire girls and women to enter their photos or pick up a camera and explore nature.’

Lara wants to keep telling important stories, including conservation successes like the rangers who walk more than 20km every day to ensure the safety of rhinos. ‘In a year or two, I hope to find myself at an elephant or rhino orphanage photographing the bond between the staff and the babies in their care; those incredible people who dedicate their every waking moment to ensuring that those orphans survive the night.’

Lara Jackson is a conservation biologist with a Masters of Research in Wildlife Conservation. She has a keen interest in science communication and research, and uses photography to emphasise the efforts of those who work tirelessly to conserve some of the most endangered species on the planet. www.larawildlife.co.uk. Instagram and Twitter: @lara_wildlife.

Asilia Africa is one of East Africa’s long-standing safari companies, with a reputation for unwavering commitment to empowering people and nature in the region. Asilia offers safari experiences paired with conservation efforts that bring meaningful change to the region and also leave a positive impact on Africa’s crucial wilderness areas.

They have camps in numerous different places, including the Masai Mara, Ol Pejeta, The Serengeti, Tarangire National Park, and more. The pandemic had a devastating impact on ecotourism and conservation in Africa with companies and reserves struggling to support their staff and the wildlife they protect. The money generated by tourism is fed back into the reserves, the communities and most importantly, the conservation of critically endangered species.

Wildlife Photographer of the Year

Wildlife Photographer of the Year is developed and produced by the Natural History Museum. The WPY 57 exhibition is now on at the museum until 5 June 2022. www.nhm.ac.uk/wpy.