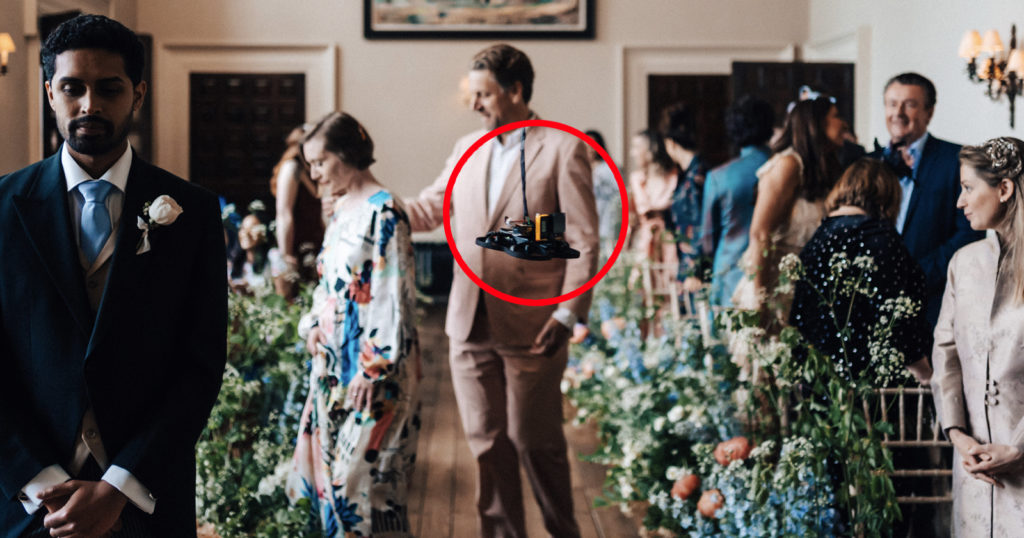 A wedding venue in Gloucestershire, United Kingdom has just published an incredibly ambitious, scripted, single-shot first-person view drone video that takes viewers on a 500-meter journey through the full grounds of its picturesque rural location.

Clearly influenced by the recent viral videos produced by Jay Christiensen of Minnesota-based Rally Studios — like this one that flies through a bowling alley or its follow up that tours the Mall of America — the video titled “Elmore Flies Again” integrates a soundtrack as well as foley audio and mixes aerial perspectives with other unique angles not yet seen by any other first-person drone pilot.

Elmore Court, a wedding venue, enlisted the skills of Andy Lawrence, the same drone pilot responsible for this impressive flight through Manchester City’s arena. Lawrence is responsible for some of the aerial stunt videos for both Top Gear and The Grand Tour. The video was produced in advance of final preparations for the restart of its ability to host weddings after a temporary closure of the facility due to the COVID-19 pandemic. Weddings may resume at the venue starting on June 21.

The tour takes viewers on a bird’s eye view as guests arrive and then through a series of intricate manoeuvres in the main house, the grounds, Gillyflower ballroom, and kitchens of the estate.

The wedding depicted in the video was put together by actors and was not an actual live wedding due to COVID restrictions, but does an excellent job painting the picture of what a real one might look like. Elmore Court was able to put together the production by enlisting the support of its wedding suppliers as well as friends, family and through recruiting 30 wedding guest ‘extras’ via a public call-out. The entire shoot was completed in just a few hours, according to the venue.

“It took a couple of practices before the final successful drone flight was achieved to everyone’s delight,” the Elmore Court says.

The only break in the full single take happens early on as the drone moves from its high, wide-angle down behind the couple entering the main doorway. After that, the impressive video is one complete, uninterrupted take.

“The main section of the film is a genuine one take flight with no camera tricks or CGI,” Elmore Court’s owner Anselm Guise elaborates. “In order to eliminate the buzzing of the drone we overlaid an audio track post-production to enable us to listen in to some of the idiosyncrasies of the wedding party as they get ready alongside some bespoke music written by some good mates from the techno trance scene.”

The pilot, Lawrence, says it was one of the most fun and elaborate projects of his career.

“The challenge of flying the drone on a journey of 500 meters in and out of a building over 750 years old with walls over a meter thick in some places, has to be one of the most challenging projects I’ve ever done,” he says.

What differentiates Lawrence’s video from Christiensen’s originals is how the pilot melded flight with a landed, fourth-wall-breaking shot. Near the end of the video, the drone is “caught” out of the air and delivered onto a tray before being walked through the last section of the venue. Combined with the tight turns that preceded it, the production of the video must have taken considerable scripting and detailed coordination.

Elmore Court says that it believes that this is one of the most ambitious drone videos shot in the UK to date, alongside the aforementioned video produced for Manchester City.