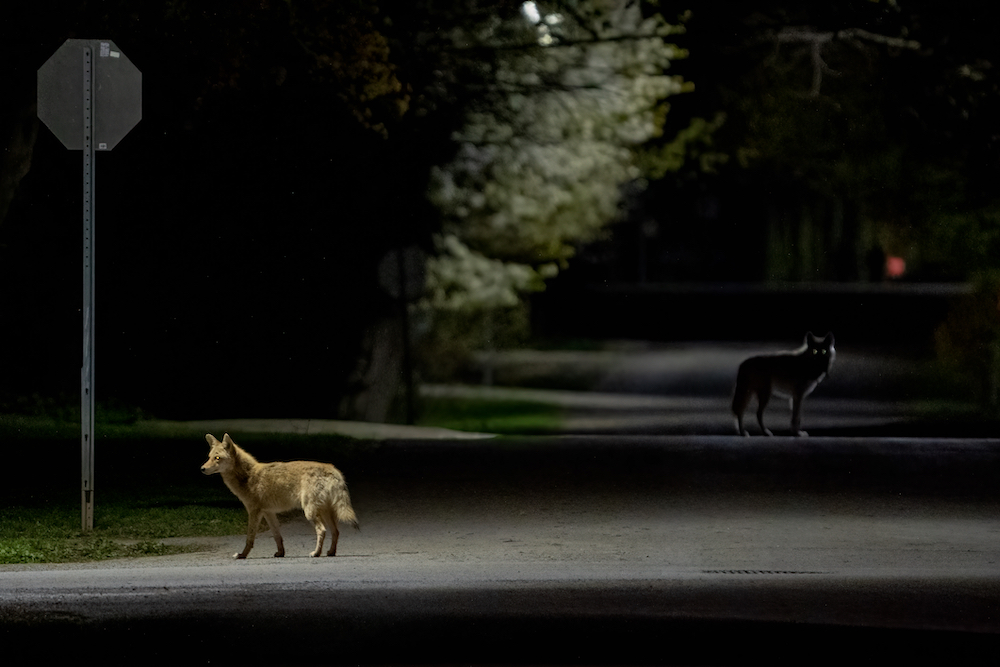 Amateur photographer Andrew Interisano, who works in digital advertising, has won the inaugural Urban Wildlife Photography Awards for his image of two Coyotes on a dimly lit suburban street in Ontario, Canada.

The free-to-enter photography awards were organised by London-based, global photography platform Picfair to honour an enduring trend in photographing urban wildlife, which proliferated during Covid lockdowns.

The competition saw over 6,000 photographers, from hobbyists to professionals, submitting their shots from every continent on the planet.

Of the overall winning image, judge Melissa Groo commented, ‘The composition and mood of this photo are wonderful. I love the play between the light and the dark, and the eerie, almost sinister glowing eyes of the coyote in the dark. Even before you read the caption, you can tell there’s a story unfolding here. And I so appreciate the photographer’s desire – after he had grabbed a few frames – to put the camera down and fully experience a truly special, wild moment.’

See below to discover the stories behind the main winning images…

Overall winner, 31-year-old Andrew Interisano, explained the story behind his image, ‘I thought it was my car that had caught their attention as I rounded the corner, and maybe it had at first, but as I rolled down the window I heard it was another group of howling coyotes that had piqued their interest. I parked, turned the engine off, and frantically went to work with the camera… however, in the rush of that moment I was soon compelled to put my camera down and soak in the scene.

As urban centres become more environmentally sound and welcoming to wildlife, it’s increasingly imperative that they and individuals take responsibility when it comes to the education on ethical coexistence with urban wildlife. There has been much debate in the town of Niagara-on-the- Lake regarding the coyote population due to some recent altercations with small dogs and their owners, including my own brother and his miniature poodle, Gordie.

These altercations usually happen because the coyotes are being fed, either directly or indirectly by humans, which encourages and increases their proximity tolerance to people, thus bludgeoning the door open for these creatures to be unjustly demonised. It’s no easy feat, but I believe this can all be mitigated through ethical urban planning, public outreach and education, and stricter enforcement of wildlife feeding laws.’

Winner – Life Beyond the Sewer by Austin Montero (USA)

A photograph of a rat emerging from a city sewer in Mexico, won the Nightlife category. Austin Montero explained, ‘I previously focused on researching sharks behaviour and photographing animals in the wilderness as a hobby. But the pandemic forced me to stay in a small town for the last two years. This led me to find several animals using different parts of our city. I have been surprised to see the number of urban structures that many species use. They shelter under bridges, move through aqueducts, or nest along roads. But usually, we don’t notice it.’

Winner – Window to the salt pan by Mano Aliczki (Hungary)

This image of a Flamingo taken on holiday in Italy by Hungarian zoologist Mano Aliczki, who revealed, ‘I spent a short holiday in Sardinia, Italy, a beautiful Mediterranean island which is famous for its huge colonies of greater flamingos. As I researched the subject before the trip, I realised that a former salt evaporating site was turned into a national park just outside Cagliari, the biggest city on the island.

This national park in Sardinia is home of one of the largest flamingo colonies on the island and allows photography of flamingos with the city and the now abandoned salt evaporating facilities as backdrop, creating exciting compositional opportunities. I managed to catch the moment when a feeding flamingo walked into a wooden frame in a levee on a salt pan.

The category was decided by a public vote on social media, went to an image of a Racoon in a ravine near a subway station captured by photographer Jill Finney, who only took up her dream of becoming a wildlife photographer during lockdown.

Finney revealed, ‘I’ve dreamed of photographing wildlife since I was a kid and only started seriously shooting at the age of almost 50, during covid lockdown when I decided it was time to make my own Nat Geo dreams come true, even if it was only squirrels in the backyard.’

More notable images include disabled wildlife photographer Jenny-Louise Read’s ghostly image of an urban fox at 2am in Kent, an impeccably lit photo of a pigeon at night captured in central London by 16-year-old physics student Oliver Schultz and what looks like a long-legged bird’s homage to Monty Python’s infamous ‘Ministry of Silly Walks’ sketch in Australia.

Read revealed, ‘I went out to take this photo as Foxes, although common for most parts of my country, are rarely seen here. Especially for me, silent ghost hunters in the night! I wanted to capture the grunginess of the street as well as the elusive personality of my local foxes.  I’m a disabled photographer with one arm, so my aim through my photography is to a) create amazing photos of our world’s most magical creatures and b) to show the world that being disabled, doesn’t mean I’m not able!’

Schultz explained, ‘I was walking back from Victoria Station on a cold English evening, and the twilight hour was fading. There was a chilly breeze cutting through the air, and while looking around, I saw a lonesome pigeon huddled against a warm light, just waiting for the night to pass.’

Rogers explained, ‘This is a photo of an Australian Native Brolga bird.’

They all received Lifetime Picfair Plus Subscriptions (worth £90 a year) and their winning shots as 30x20cm framed prints.

Viral images of urban wildlife proliferated during the height of the pandemic, and the fascination with snapshots of wild animals in our towns and cities has continued to spike.

The number of Urban Wildlife images on Picfair has more than quadrupled since 2019, and City Nature Challenge, one of the biggest global databases of urban wildlife, made a record breaking 1.2 million observations last year.

View all the winners

You can view a gallery of all the finalists and winners on the Picfair website.


You can buy prints of the winning images – all Picfair profits on print sales will go to the global conservation non-profit organisation Re:wild.

The Best Cameras for Wildlife Photography 2022

Best Lenses for Wildlife Photography in 2022