Aditya Kinjawadekar Photographed a 360° Image of the Milky Way 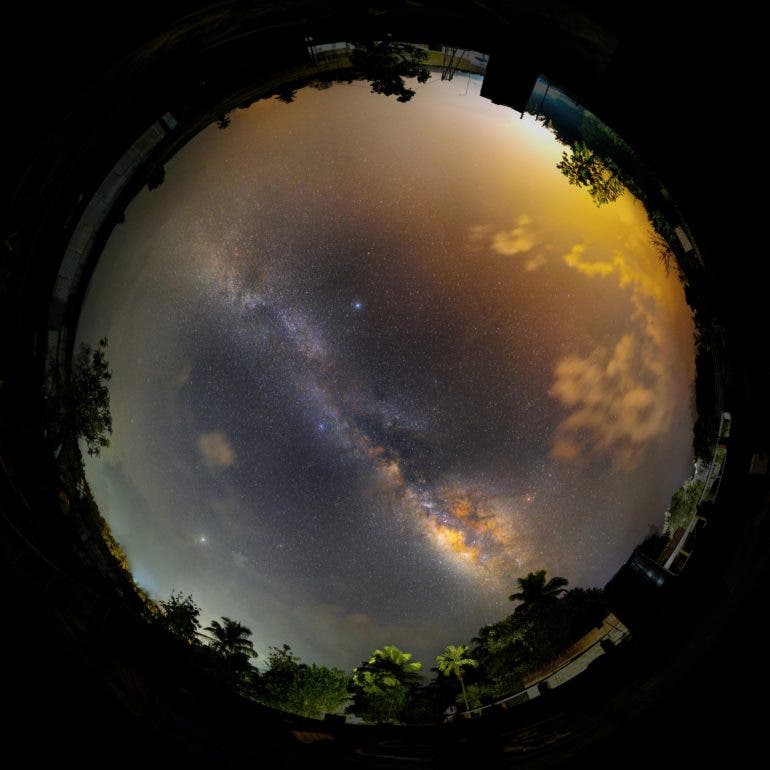 “Shrinking of dark locations is a valid concern,” says young Aditya Kinjawadekar of India about the alarming rate at which night skies are being taken over by light pollution due. He took some time out of his busy university schedule to connect with us about his amazing 360° Milky Way image for this interview. This shot scored a lot of reactions on Reddit a few months ago among the astrophotography community.

Much like Aditya, I got into photography more seriously during my 2nd year of Engineering a couple of decades ago. And I have to thank him for taking the effort for this interview, as I know all too well what the pressures of Indian engineering can be like. Outside of his university books, Aditya has been making steady progress in astrophotography for the last handful of years. Although his studies don’t currently give him too many days a month to focus on his passion, he does his best to set aside some days to pursue it with great enthusiasm and focus.

There are targets in the night sky for almost every focal length! If I want to shoot a nebula or galaxy in great detail, I choose to shoot through a telescope, as they provide very high focal length at relatively faster focal ratios (f/ number).

Aditya Kinjawadekar: My name is Aditya Kinjawadekar, and I am an engineering student, and I do astrophotography as a hobby. I have been interested in visual astronomy and theoretical astronomy ever since I was a child. Realizing my interest in astronomy, my parents bought me a telescope, and after using it for a few months, I started wondering how can I share these views with my family and friends. I tried to take a few images of the moon with my cellphone, and I was instantly hooked!

The Phoblographer: How did you plan the 360 milky way photograph? What went into the execution of this image?

Aditya Kinjawadekar: I always saw different astrophotographers shooting full-sky Milkyway images, and I was fascinated by seeing them. I wanted to capture an image like that for very long but didn’t really know how. So I messaged a couple of photographers on Instagram, asking them how to capture images like that.

This was around the monsoon season in India, so I was not expecting to capture the image anytime soon. Still, it miraculously cleared the next day for a brief period of time, and I could apply the techniques and take the 360-degree image I always wanted to capture.

Capturing an image like that is simple, really. You need to take about 30 images covering the entire sky, with at least 30% overlapping between them. To take these images, I mounted my camera on a tripod and set the lens at the widest focal length, which was 28mm in my case. I then started taking images in horizontal rows, gradually moving upwards. Once I had collected all the images, I just threw them in a program called Microsoft ICE (Image Composite Editor), and then it stitched the images for me, giving the full-sky panorama.

The Phoblographer: You’ve garnered a lot of upvotes and positive comments on Reddit for this image. How did you feel seeing the response and tell us what you learnt from this experience?

Aditya Kinjawadekar: I had never thought in my life that any of my images would get so many upvotes and [so much] positive feedback! I was constantly getting awards and comment notifications and couldn’t think of anything the entire day! It was also one of my first posts to get on the front page of Reddit, which was a really humbling experience. It also motivated me to keep on going and to take more such images!

The Phoblographer: You nailed the Andromeda galaxy in a fantastic image too. Have you been doing astro photography for a long time now?

Aditya Kinjawadekar: Thanks! I have been doing astrophotography for about five years now and only got serious about it for the last three years. I have learnt everything about taking such images from the club members I volunteer with, JVP (Jyotirvidya Parisanstha), and online astrophotography forums like Cloudynights.

“The telescope I use often is a 6 inch primary mirror scope by the brand Skywatcher. It’s a newtonian type of telescope, in which there are various concave mirrors used instead of glass lenses. This telescope has a focal length of 750mm, and it operates at f/5, which is insanely fast at that focal length!”

The Phoblographer: As an engineering student, isn’t it awfully difficult to make time for your passion, especially if it means a lot of late nights?

Aditya Kinjawadekar: It’s true! I find it really difficult to [find] spare time for the hobby from my engineering projects and assignments, so I get very little time for shooting nowadays. Still, I try to shoot at least four to five nights a month, usually on weekends when I don’t have as much load.

The Phoblographer: The waiting game must be so common for you now. How do you deal with the frustration of not being able to go out just any night to capture something you’ve been hoping to?

Aditya Kinjawadekar: Indeed, astrophotography is a game of patience. Firstly, you only get totally dark skies to shoot near new moon nights, which is only a week or two per month. Now you plan a trip to a dark sky location in that period, and if it gets totally clouded out or the equipment fails, then it would be very frustrating, wouldn’t it? On the occasions like these, I try to spend my time re-processing the images I had captured previously. I get to learn new things every time I re-process my images, and it helps me improve my processing workflow, which is as important as capturing the data.

The Phoblographer: Microsoft ICE for panorama stitching; not the first choice that most photographers would go to. How has your experience with this software been so far, especially on that 600 mp file?

Aditya Kinjawadekar: From my testing, I have found that Microsoft ICE is probably the best program to stitch night sky panoramas. I have tried stitching my astro images in Lightroom, Photoshop, or even in advanced astrophotography processing software Pixinsight. But none of them are able to stitch all of the images properly without spending a lot of time tweaking the values. ICE is the easiest stitching software to use; it’s the fastest, it works perfectly, and on top of that, it’s completely free! It doesn’t have a reputation in the astro community for no reason!

I also found there are different projection methods you can choose from, which none of the other mentioned software offers.

“When I am shooting wide field rich star-packed images, I often go with faster camera lenses. My favorite lenses for this type are Sony 50mm f/1.8 and canon 70-200 f/2.8 lens, which I adaopt to my sony camera with viltrox ef-nex adapter. 200mm is probably my favorite focal length for shooting deepsky objects, as you can fit more than one object in the same field, and they pop against the rich star fields, which looks really good.”

The Phoblographer: Stitching can be complex, especially for 360, having to factor in exposure changes across the entire range of images. What’s a good tip for our readers to help tackle this issue?

Aditya Kinjawadekar: Exposure changes during the series of images might totally ruin the final stitched panorama. To avoid exposure flickering or brightness changes, keep the settings constant throughout the series and shoot in manual mode so that the camera doesn’t intelligently change any settings that might affect it in a negative way.
Also, don’t forget to correct vignetting and apply lens profile correction in Lightroom before stitching, as it might create weird artefacts after stitching.

The Phoblographer: With a lot of urbanisation in India now and especially with more and more rural areas getting electricity lately, how challenging has it been to find a dark sky area?

Aditya Kinjawadekar: Finding some truly dark sky locations is becoming really difficult nowadays due to urbanization and the installation of road lights and so on. The place I regularly shoot from was a really good dark sky location too, but due to the new highway going right through the village and after the installment of tungsten lights, the sky has been completely washed out and is unusable for any type of astronomical imaging.
Shrinking of dark locations is a valid concern, and some actions need to be taken over that.
If this still continues, then we would be left with no option other than to stop astrophotography completely or travel to places like Ladakh just to get a glimpse of our neighboring stars.

The Phoblographer: What’s that one object in the sky that has eluded you, which you hope to capture some day?

Aditya Kinjawadekar: I am always fascinated by the Southern hemisphere objects, which are normally hidden from Northern countries. Eta Carina Nebula and Large Magellanic Cloud (LMC) are the objects that have always eluded me, and I wish to capture them someday.

“To get rid of the star trails, we astrophotographers use star tracking mounts, which track the motion of the stars, keeping them in the center of the field while taking long exposre images. I use Skywatcher EQ3-2 or iOptron SmartEQ pro mount, depending on what telescope or lens I am using. Usually I don’t use any tracking mount for my landscape astro images.”

The Phoblographer: With photographers doing such a great job with deep sky imaging like this, isn’t it just a matter of time before someone spots a UFO?

Aditya Kinjawadekar: UFO stands for Unidentified flying object. Any flying object that is known to me, but not to you, will be a ‘UFO’ to you, and vice versa! So by definition, I have already captured a bunch of UFOs, and anybody without any fancy equipment can capture them too.

All images by Aditya Kinjawadekar. Used with permission. Visit his Instagram and Twitter pages to see more of his work.