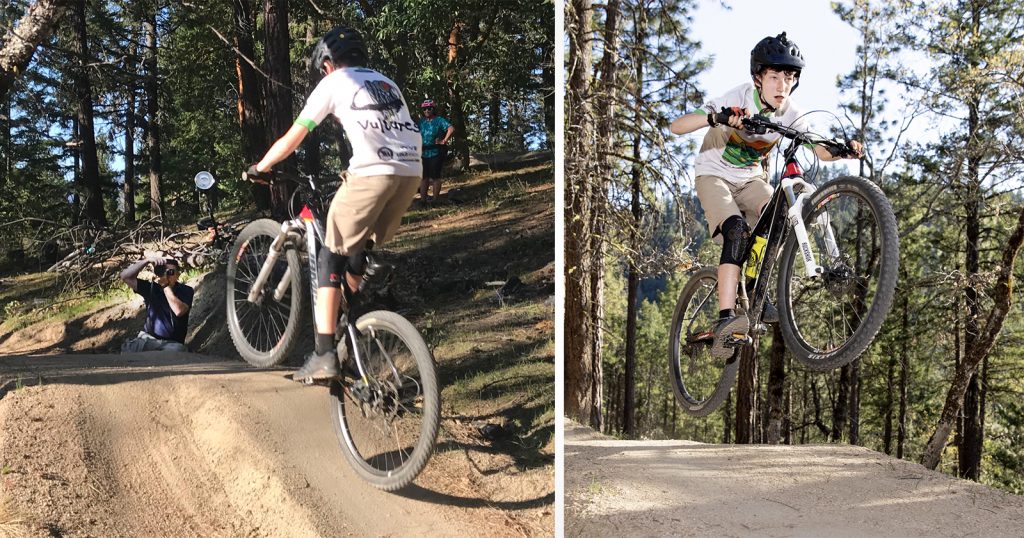 For most photographers, it’s been an interesting past year and my experience is no exception. My regular work shooting for commercial clients and agencies in the San Francisco Bay Area was upended by the Coronavirus pandemic, and keeping busy has meant constantly shifting gears to keep the calendar full.

The pandemic has also meant a year of staying close to home. Now officially vaccinated and with travel restrictions being lifted, I jumped at the opportunity to travel to my home state of Oregon to spend a weekend shooting mountain biking photos. The photos will be used to help promote outdoor recreation in the region, and to build a library of promotional photos for Ashland DEVO — a Southern Oregon non-profit that teaches kids how to ride and race mountain bikes.

Founded in 2017, Ashland DEVO has trained hundreds of area kids to ride recreationally and compete in local, regional, and national races, in addition to providing them with a solid dose of nature therapy. Mountain biking has grown exponentially in Southern Oregon over the past decade, thanks in part to an ever-expanding trail system, plenty of bike shops, growing tourism, and new programs like Ashland DEVO to support the rapidly growing interest in the sport.

With a beautiful, warm weekend forecast, I packed up the Subaru and headed to Ashland, located just a few miles north of the California border.

The photos shot will be used to promote mountain biking in the Southern Oregon region and to help promote Ashland DEVO’s programs. Creatively, I had three goals: I wanted to share the beauty of the Oregon outdoors, show some great mountain biking action taking place, and capture the emotions that communicate the thrill of downhill mountain biking. 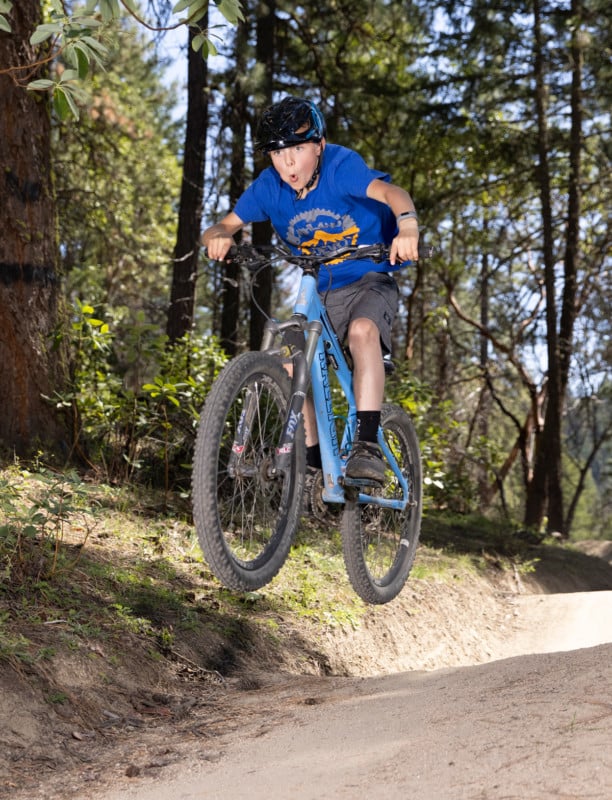 Technically, it was also important on these shoots to capture each shot in a way that allows it to be used in a wide variety of media. Photos may be used in print, online, on signage, packaging, collateral materials, or broadcast, and each has its own formatting requirements. A web banner, for instance, may be cropped 1:4, 1:6, or 1:8 tall, and the exact same photo may be used in a print ad at a 16:9 scale. Capturing a great shot can be personally rewarding, but if it’s for commercial purposes and the client cannot use it for their different needs, it likely won’t be able to be used. That had to be kept in mind for each shot taken. For this reason, I framed each shot fairly wide, leaving plenty of room for various crops and anticipating how each photo might be used in different media.

Lighting Up the Trails

Our shoot location was just a couple miles from downtown Ashland, and our location scout prior to shooting allowed time to find a few great jumps, bumps, curves, and berms to shoot against. It was a beautiful, sunny, 75-degree day, with gorgeous dappled light falling onto the forest floor and trails. The dappled light, of course, was the first thing to manage — while beautiful to the eyes, dappled bright sunlight falling onto a dark forest floor can be very difficult to capture action shots in.

I brought three Profoto B1X strobes and reflectors to light the subjects, and a handful of extra batteries as well, since shooting at (or near) full power all day, plus using HSS, uses a lot of juice. Most shots were taken with just one or two strobes, but having backup gear in a remote area is key, and on a few shots doubling up strobes with a lower power setting on each allowed for faster shooting and recycling speed. I used zoom reflectors on the strobes, foregoing any umbrellas and softboxes for these action shots. Using all the available light from the 500ws B1 lights was needed with the bright sunlight, and the look of hard, contrasty light for these types of action shots seemed more fitting for the style of shooting I had in mind.

Hiking up and down hills all day also means efficiency and portability are key: carrying lightweight reflectors helps make for a lighter load, they’re easier to hide in the shots, and they’re less problematic in case of any wind. A couple of light stands and a camera bag rounded out the gear needed to capture most of the shots.

Strobes were placed in different positions in each shot, depending on the angles of the camera, subject, and terrain. In some cases, the strobe had to be placed at ground level pointed upwards to properly light the subject’s face; in others, a light held high in the air works better. Lighting under the visor of the helmet proved to be one of the bigger challenges; a dark shadow will rest right on the eyes if the light is placed to close and high. Choosing the background that appears behind each subject is another important consideration. Even with supplementary lighting, a biker flying through the air can get lost in the photo if the area behind them is too busy or does not create enough contrast against the subject. An open sky usually helps isolate the subject nicely, and dense trees or a dark mountainside also typically work well for me. Other photographers have great results in very different environments and with different approaches, but visualizing what you’re looking for in advance and finding the locations that match your particular vision will make a significant difference in the end.

Once I was set up, it was time to start shooting. We had six young athletes to shoot, all of whom were representative of the ages of those in the Ashland DEVO program. Despite their young ages (7-13), all were very accomplished riders who were able to not only keep up with but in some cases completely smoke past adults riding the same trails. They may be smaller than adults, but they’re surprisingly fast, very skilled, and great subjects to photograph.

The speed at which the riders launched down the trails made planning critical and camera settings that allowed great shots to be captured on each run. After a run, each rider had to hike back up to reset for their next one, so fatigue can be a factor — you don’t want to spend time adjusting camera settings or resetting lights only to miss shots on each run or you’ll lose your riders quickly. Before shooting the action, the area where the shot would be taken was identified, and a few test shots are taken with a person standing in that position. This helped eliminate any trial-and-error during the actual shoot. It only takes a minute or two to adjust the lighting output and/or exposure settings while doing this and saves a lot of time and effort while the actual shooting is taking place. Once the test shots were complete it was time to send the bikers down the hill, around the berms, and up the jumps. After shooting for 20 to 30 minutes, we moved to a different pre-scouted location. Slowly moving downhill, we shot as many different areas as possible, given the terrain we had to work within the area. With two more shoots scheduled in the near future, we didn’t need to drive to different locations on this shoot, which saved valuable time.

I used a Canon R5 here and it worked flawlessly on this shoot. Most action shots were taken using shutter speeds of 1000 to 2500 second, ISO 200 to 800, and between f/2.8 and 4.5. Many were shot at a distance using the Canon 70-200, with a handful of wider shots taken with a 24-70mm. Focus tracking sensitivity was maximized and as a result, almost every shot was in focus. Any missed shots were the result of an early or late click on the shutter. The 45 megapixels on the R5 also allows for the different crops that might be needed for each photo. 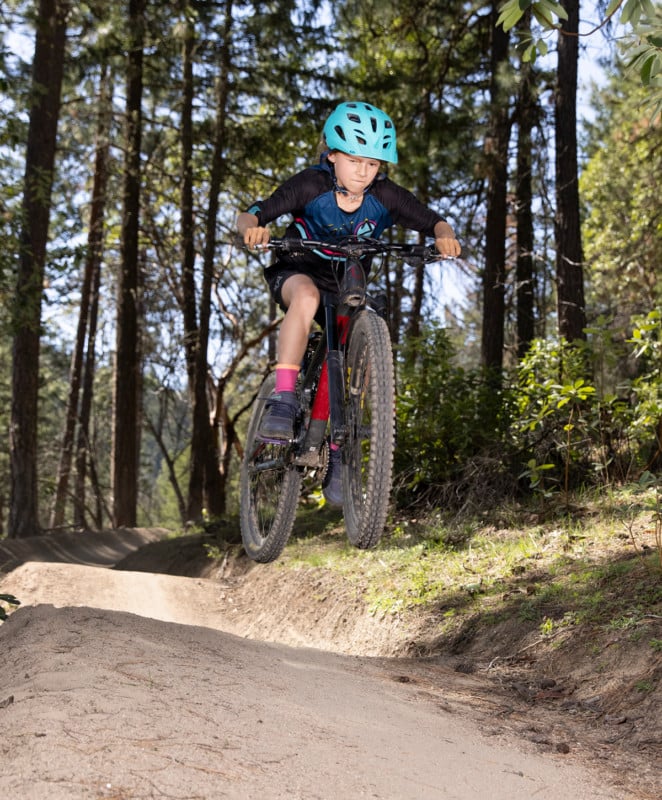 Shooting in a hot, dry, and dusty trail environment creates some additional challenges — or at least a few things to keep an extra eye on. Keeping dust off the lens and sensor when swapping lenses, keeping your camera bag closed, and balancing strobes and light stands on uneven terrain are a few (needless to say, the sandbags stayed in the car).

It’s important to anticipate action, and be ready to move quickly if a rider suddenly veers off course or loses control, and not become an obstacle yourself or overly distract the rider. Having some extra water, a snack, and a first aid kit will make the day more comfortable, and having plenty of batteries, memory cards, and backup gear may just save your bacon. 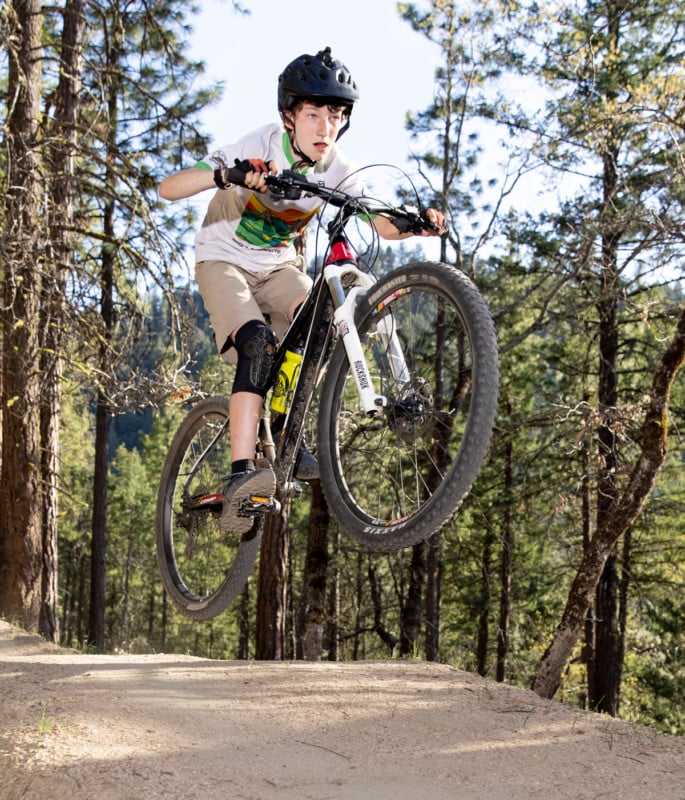 Wrapping up the day

Shooting mountain biking action is a blast, but like any other shoot, it’s a lot of hard work. It’s constant moving, setting up, adjusting, resetting, anticipating, capturing, reviewing, then doing it all over again. Preparation, planning, and scouting are critical to a successful day, but in the end, it’s incredibly rewarding to have spent the day outdoors capturing some very enthusiastic young riders doing what they love the most — mountain biking.

About the author: Chris Constantine is a commercial advertising and editorial photographer from San Rafael, California. A native of Oregon, he now spends his time in the San Francisco Bay Area shooting portraits, lifestyle, and product photography images for a wide range of clients. While he’s studied photography most of his life, it became a full-time career for him in 2013. You can see more of his work on his website or on Instagram.