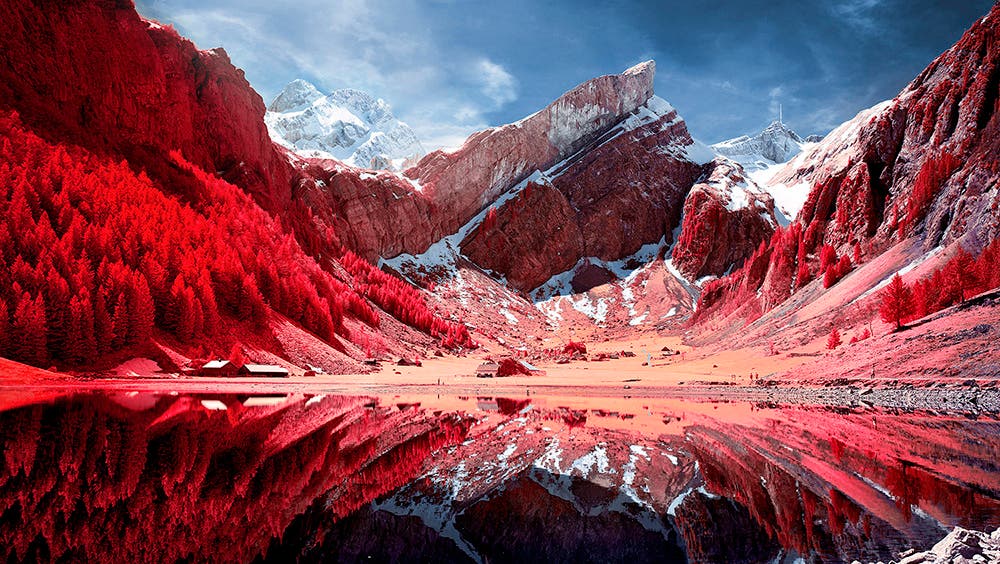 Infrared photography has been a constant theme here at The Phoblographer. When photographers load up some Kodak Aerochrome, embark on an adventure, and create their infrared masterpieces, our excitement reaches boiling point. We have published many photographers shooting in this style. Below are some of the best to feature on the publication.

It feels like Ryan Struck has grown up in front of our eyes over the years. We have featured him several times, with each piece showing his growth in the photographic practice. In 2018 he shared his adventurous infrared photography that shone a beautiful light on beach and surf life. On shooting the series with Kodak Aerochrome, he says, “It pushed me to think more about what I wanted to say, and made me question what I was doing with my art.” Enjoy the work here.

Paolo Pettigiani is a fan favorite here at The Phoblographer. His features are always a success, and you only need to look at his infrared photography to understand why. The above image is from a series shot in South America. The southern continent is known for its incredible nature and landscapes. We feel Pettifiani took that beautify a step further by documenting it in such a unique manner. Breathtaking. See more of his images here.

Our most recent installment of infrared photography took place in January this year. Fernando Sciotto is the photographer and his Cycle of Life series is the subject matter. To be blunt, this series is dope! “I wanted to work on a new series dedicated to the cycle of life, with an emphasis on irremediable death,” says Sciotto. He adds, “It may seem a bit dark, but it is nature. I prepared the concept. I wanted simple images that look like an ethereal dream: bodies and nature together, reminding us of a passage from Genesis.” Check out the portraits here (NSFW.)

If snow-glazed mountains aren’t captivating enough, the photographer Doug Golupski made them even more visually gripping by shooting them with Kodak Aerochrome. The deep blues of the water and sky, paired with the purple mountains, make Golupski’s work a joy to view. He wishes he found this style sooner, telling The Phoblographer, “Kodak Aerochrome has been an unfortunate new revelation for me; I say unfortunately because it’s expensive and hard to get now.” At least he did discover the film roll, allowing us to enjoy his work.

Zak van Biljon is another photographer that gives us his take on landscape photography. It seems to be a common theme in the infrared photography community; we’re not mad at it! Biljon’s images are grandiose and show the size and strength of the earth’s natural wonders. Often on the road, Biljon preserves his expired film roll by carrying around a mini-fridge with him. That’s dedication to the cause! If you want to see more of his majestic images, take a look here.

Rob Walwyn documents the aftermath of wild bushfires, a challenging topic to tackle. Although it may be, it doesn’t seem right to describe his work as stunning. The bushfires in New South Wales took 240 days to contain, destroying 80% of the Blue Mountains World Heritage Area. Shooting the series in medium format, we feel Walwyn did the topic justice and created a series full of empathy for all that had happened. Take a look at the series here.

Send us Your Infrared Shots!

If you shoot with Kodak Aerochrome then please do show it to us. The film roll is getting more scarce, so we want to see as much of it as possible! You can use the form below to get in touch.

Which photographer caught your attention? Let us know the comments below. Thanks for reading.