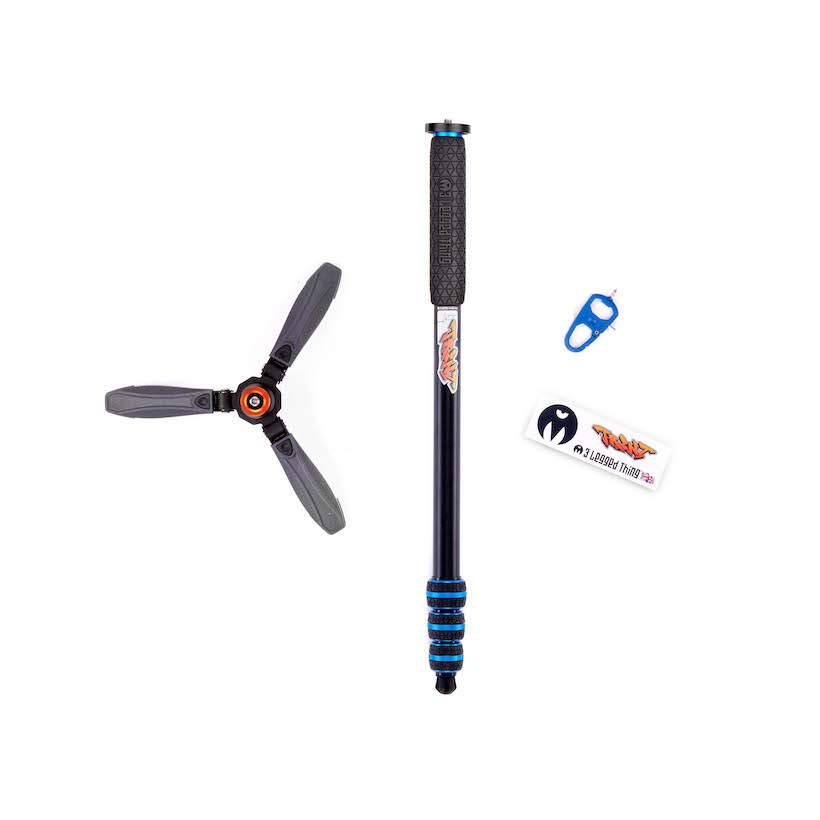 The British tripod-maker 3Legged Thing (3LT) has announced new versions of its ultra-tall Punks monopod Trent with Punks Trent 2.0 – an ultra-tall magnesium alloy monopod available as a standalone monopod or in a kit with 3LT’s Docz monopod foot stabiliser.

The Trent 2.0 is over two metres (6.5ft) tall at full extension, can support loads of up to 30kg (66lbs) and weighs just over 700g, giving it a load-to-weight ratio of almost 50:1. It has dual 1⁄4”-20 and 3/8”-16 threads at both ends and at the top, a spring-loaded combination screw thread allows a camera to be mounted directly to the monopod, or for a tripod head or clamp to be added to enable quick release. In the base, a 3/8”-16 thread with 1⁄4”-20 adapter enables compatibility with a variety of tripod footwear and with the Docz stabiliser.

To bring it into line with the Punks 2.0 tripods, Trent 2.0 features rugged new leg locks that combine knurling with a central rubber grip, for improved leverage in damp conditions or when wearing thick gloves – common conditions for wildlife and sports photographers. Internally, the leg locks now have the same anti-rotation Chicken Lips (shims) as current 3LT tripods, making Trent 2.0 more rigid and stable when extended.

The Trent 2.0 monopod can be paired with 3 Legged Thing’s Docz monopod foot stabiliser to help to provide additional support on any terrain. Its central ball joint can be loosened to help users create smooth panning shots, or locked in place when an upright support is required.

Stuart Boston, 3LT’s chief operations officer, explained, ‘Trent has been one of our most popular products since its release in 2018. We’re excited to bring the new refreshed Punks 2.0 look to Trent, whilst maintaining the unparalleled load capability and impressive extended height of its predecessor. We’re sure that videographers, wildlife, and sports shooters will love it!’

The Punks Trent 2.0 monopod is now available in a choice of two colours – Metallic Slate Grey or a Metallic Blue version, like that seen on the Punks 2.0 tripods. Both the monopod only and the kit version are available now online and in retail stores. The suggested retail price is £79.99 for the monopod and £119.99 for the kit with the Docz stabiliser. To find out more go to: 3 Legged Thing

The ultimate guide to tripods