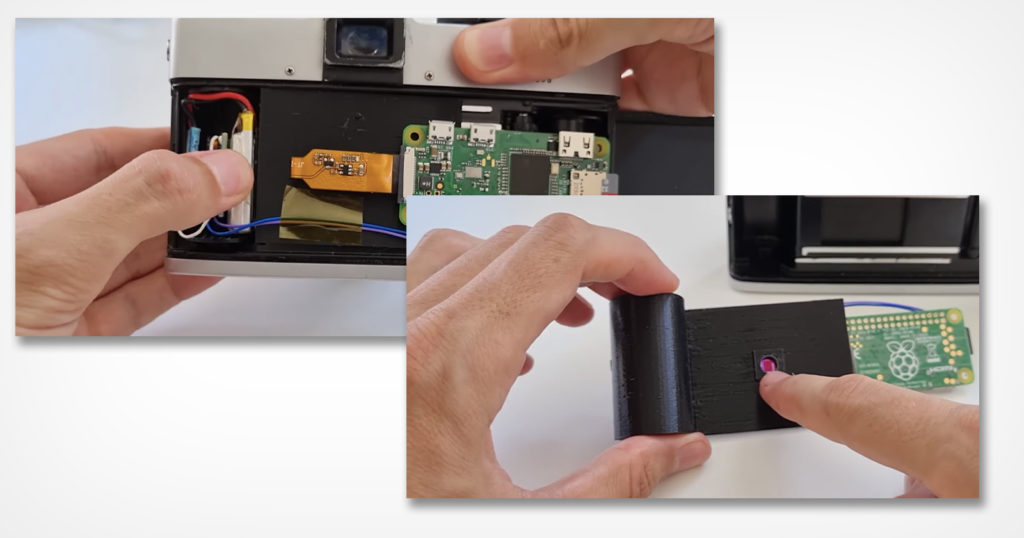 YouTuber befinitiv has published a video where he shows how he updated an old Cosina Hi-Lite film camera with a cartridge based on a Raspberry Pi that turned the analog camera into one capable of capturing digital photos and videos.

Befinitiv’s video shows any curious minds how to build a custom film cartridge that turns any analog camera into a digital camera. With it, a photographer is able to drag any analog 35mm camera into the modern-day.

“It can do everything you would expect from a digital camera nowadays,” he says. “It can do video, it can stream video over WiFi, and can store things on an SD card.”

He removed the Pi camera’s lens to instead use his Cosina camera’s own optics and shows how he is able to take digital photos with the film camera that are of surprisingly decent quality.

“[The Pi camera] behaves like the film did,” he explains

The custom cartridge is powered by a small battery and converter that are housed in the 3D-printed film cartridge section. The whole unit fits nicely into the camera and allows the rear plate to cleanly close over it.

In addition to turning the film camera into one that can capture digital photos, as noted it is also capable of video features. Video can be broadcast to a phone or computer over WiFi via the Raspberry Pi.

In his video, befinitiv shows that this particular implementation has, as he says, “quite insane zoom” because of the Pi Camera’s tiny sensor, which makes it hard to see what he is looking at. That said, he has full access to focusing that allows him to get sharp images, despite the zoom.

“I couldn’t really tell from this that it was shot on a 50-year-old camera,” he says when analyzing the video feed. “It looks pretty much like a digital camera to me.”

That’s likely because it is, and the optics on the old film camera are perfectly suitable for the small sensor on the Pi Camera.

“I am really happy how this turned out,” he concludes. “It actually gives some interesting and nice-looking images. And it feels so weird having this old-school camera doing live streams here over WiFi and recording video. It’s really an odd feeling, but a really fun one. I can only recommend to also build something for your cameras because it is really fun and gives these things a new life, which is I think always great for great, high quality, retro-tech items.”