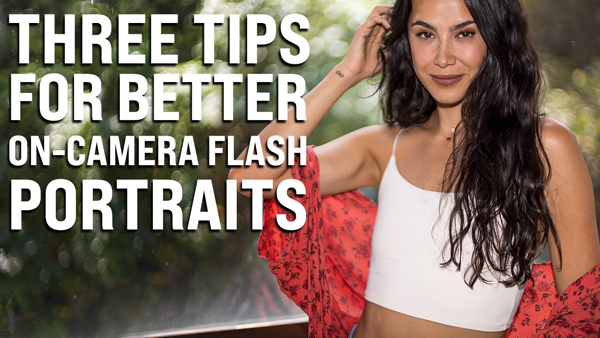 Some photographers turn up their noses at the notion of using on-camera flash for portrait photography. But the technique is super easy to accomplish, and done right it can yield surprisingly beautiful results.

The tutorial below from AdoramaTV is designed for those new to on-camera flash, and in just 11 minutes photographer Mark Wallace demonstrates three tips for getting the job done. There’s no expensive gear required, and you can use these techniques indoors or out. All you need is the information Wallace provides and a pretty model.

For this behind-the-scenes shoot from Medellin, Colombia, Wallace set aside his fancy lighting gear, mounted a flash on his Canon EOS R5 mirrorless camera, grabbed a simple reflector, and worked some magic.

His first tip involves softening the light for a more pleasing look, and he does that by swiveling his flash around and bouncing the light off a round reflector (instead of shooting directly into the model’s face). In essence, the reflector then becomes his light source. During the demonstration, Wallace provides exposure settings, flash mode, and before-and-after examples of the various techniques. You’ll see that direct flash introduces a number of problems, including hot spots on the model’s face. But the simple act of bouncing the light off a reflector delivers far more even and flattering results. And moving the reflector in different positions relative to the subject enables you to control and shape the light for exactly the look you’re after.

During this episode Wallace explains how to balance flash output with available light, use high-speed sync for more natural images, and employ exposure compensation to adjust ambient light. We’re pretty sure you’ll be surprised by Wallace’s second tip, and by how easy it is to accomplish everything in the video.

Our guess is that after watching the tutorial, you’ll reach for a flash the next time you do some portrait photography. In the meantime, you can find other helpful videos at Adorama TV, and see more of Wallace’s work on his YouTube channel

Why F/4 Lenses are GREAT Compared to Faster Options (VIDEO)

How to EDIT Sunset Photos for MAX Impact (VIDEO)

Use HDR to Capture MAGICAL Photos at Blue Hour (VIDEO)