22 of the Best Black Photographers You Need to Know 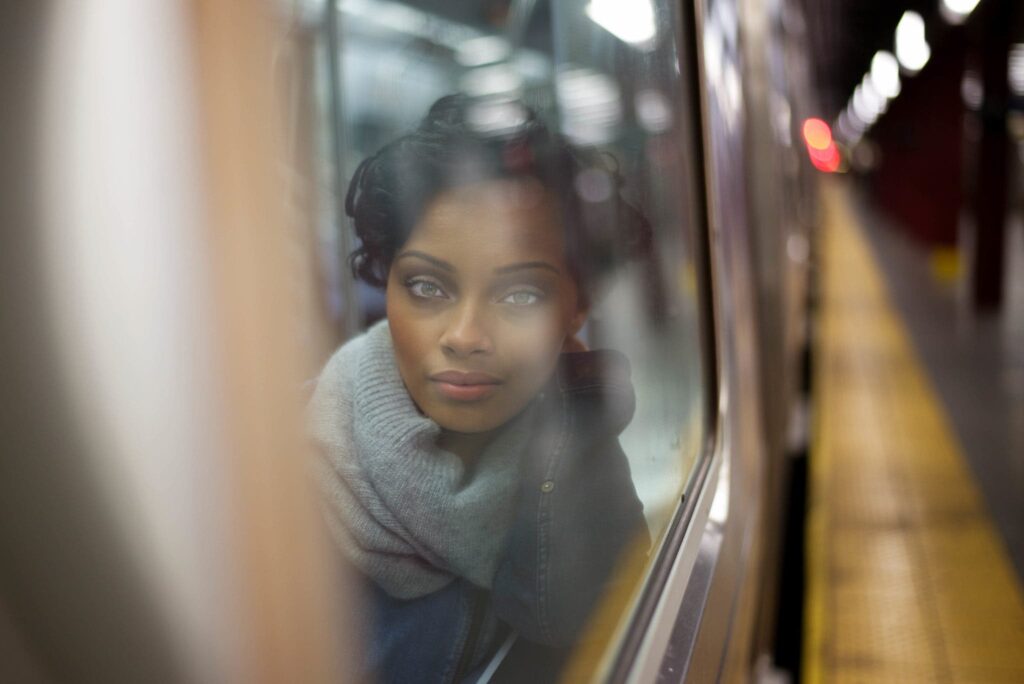 Black History Month allows us to reflect. Along with photography, many fields and societies can ponder the stories of black communities around the world. For over a decade, The Phoblographer has had the honor of featuring some of the best black photographers in our industry. From street photography to portraiture, documentary to editorial, we’ve featured all types of genres and photographic stories coming from the black gaze.

We featured Aaron Pegg in 2015. We were gripped by his edgy, underground portraits shot in the NYC subway. “I wanted to separate myself from other photographers in New York yet still shoot something that is such a big part of New York’s DNA,” he told us during an interview. Pegg’s subjects are diverse, as are the stories they tell. We love his approach to thinking outside the box, which earns his spot on our list of the best black photographers. You can enjoy more of his work here.

Sadly, we never had the honor of speaking directly with Louis Draper. He passed back in 2002, seven years before this site launched. We did, however, have the privilege of sharing some of his work thanks to the Steven Kasher Gallery. Draper’s first exhibition was at the Black History Museum in Richmond. Since then, his works have been shown worldwide, including in Germany, France, and Russia. We were able to speak with his sister, and she had plenty to share. You can read it all here.

The story we published with Melissa “Bunni” Elian was from a joint series with Fujifilm called Visual Momentum. Elian worked on a particular story that led her to follow the life of a young black man named Travis. The work aimed to show Travis’s difficulties, raising his son, working to earn, and chasing his dream. Elian also shares her journey into photography and how 37 hours in jail changed her life. Read more here.

C. Stephen Hurst is another photographer who took his photography to the underground as well as for weddings. He placed high-end fashion models amongst the hustle and bustle of New York’s subway. On shooting the series, he told The Phoblographer, “I tried to prep as much as possible about model placement and interaction but not everything can be predicted. I wanted to have a sense of magic realism.” You can see it all right here.

Lester Cannon has a fascinating story that easily earned him a spot on our list of the best black photographers. Alongside being a photographer, he also held the position of a Sergeant in the US Army. However, he enjoyed creating images when he wasn’t doing his work duties. “Portrait and Photojournalism/Street Photography are what I love the most. I enjoy traveling all over the world and photographing as many beautiful and interesting people I can find,” he told us. Cannon’s work is exceptionally well executed and full of strong emotion and tenderness. Take a look at it here.

Soho Trendz made a habit out of documenting everyday life on the streets of NYC. When viewing his work, don’t expect to see coincidences or a silhouetted figure in front of a vibrant backdrop. Instead, be open to enjoying how he makes the hairs on the back of your neck stand up through the feelings that occur because of these mundane moments. That’s the sign of a talented photographer, and you can see his work here.

Jamel Shabazz is no stranger to those who read the site often. He’s a legend of the game. He’s also one of the nicest people in the industry. Every so often, Shabazz will speak to us about his past works and anything he’s working on in the present moment. In his most recent conversation with The Phoblgrapher, he revisited old images and told us the stories behind them. You can take a look here. But it goes without saying that he’s one of the best black photographers for sure.

Nina Robinson is another photographer we featured through the Visual Momentum series. Her story is truly beautiful. Robinson set up a project that introduced older people to photography. The project gave them all a camera to help them detach from everyday life and bring people together. The project became a form of Phototherapy, and you can read about this genuinely heartwarming story here.

Jamiya Wilson is a Phoblographer Alumni. In 2019 we featured his 100 Faces portrait series. The series is a collection of 100 unplanned street portraits of people Wilson would stop at random. “Many of the people I approached looked downright intimidating, but I pushed through my fears and asked to take their picture regardless,” he told us in an interview. It’s a wonderful series of portraits, and you can enjoy them here.

Still in his twenties, Rydell Tomas Jr has amassed a body of work that suggests he’s well beyond his years. Back in 2018, then only 22, we showed the work from his zine titled, American Dream. “It documents the people of Atlanta, and nearby cities. It gives insight to anyone who isn’t from the area. Atlanta is a culturally enriched city, and I want people to enjoy it,” wrote Tomas Jr. You can check it out here.

Clay Benskin is a street photographer with a love-hate relationship with social media. Often one to delete his Instagram account, it seems he’s much happier making photographs rather than sharing them online. Thankfully we have had the opportunity to share his work on the site. Benskin is known for his perfect timing and skill of seeing a scene most mortals would never see. He’s a talented street photographer, and you can enjoy his work here. Once you look at his work, you’ll understand why he’s on our list of the best black photographers.

Courtney Coles is far from a one-trick pony. Visit her website and you’ll soon realize that Coles can shoot just about anything at the highest standard. It’s her music photography that we’re more drawn to, and we featured it in 2018. She started shooting bands in 2004 and hasn’t looked back. Coles has a talent for capturing the everyday lifestyle of a touring band and the hard-core energy of their performances. See more of her work here.

Chinelle Ro is a photographer who has mastered the art of self-portraits. Her portfolio has it all: creativity, humor, conceptual, pain, love. It’s all there. To this day, her feature remains one of the most popular on The Phoblographer. We particularly liked her #myblackself series. On doing the work, she told us:

“When people see me, I’m Black FIRST before everything. It wasn’t until my mid 20s that I actually embraced that. So, titling the entirety of my self portrait work, my ongoing, 10-year long project, as “My Black Self” seemed appropriate. It’s a constant reminder, that I am, in fact, SO proud to be a Black woman, and wouldn’t change that for anything.”

Check out her work here.

Obafemi Matti came into our lives when we were crying out to see some refreshing portrait photography. Answering an open call, Matti sent us his surreal portraits that mix reality with the world of fantasy. “Through a lens, I try to dig deeper to find my subjects hidden thoughts, fears, dreams, and imagination in an effort to discover them beyond what I believe them to already be.” says Obafemi.” You can see the work here.

Frank Jackson has been shooting professionally since the mid-70s. “I concluded around the age of 15 that I was spectacularly awful at drawing, so I picked up a camera to discover I could take a photograph by using the camera as a pen that uses light for ink,” he told us in a 2021 interview. His photographs have a classic black and white look. They’re minimal yet full of character. We adore his work. Take a look here.

Matthew Jordan Smith is a Nikon Ambassador and a long-time friend of the site. Our readers will know that we’re big fans of photography that doesn’t rely on Photoshop to bring it to life. In 2021, we spoke to Jordan Smith about some client work he did. Blending street photography and portraits, he shows what you can achieve simply by knowing how to use your camera. “When my client received the images, he liked them so much he told me he couldn’t decide which image was his favorite!” Check it out here.

Theik Smith was messing around with point-and-shoot cameras as a kid. From there, he went on to push his photography, eventually finding his photographic voice through the form of portraits. “My lighting style is borne from a mish-mash of influences; movies, comic books, fashion – oh, goodness, I love, love, LOVE Horst P. Horst and Richard Avedon!” says Smith. You can see his wonderful work here.

Yoga has grown in popularity over the past decade. Naturally, that means more and more photographers want to document the practice. Spencer Bently would shoot anything and everything until one moment, it all changed. “After years of fighting to resist specialization, I’m finding myself exclusively shooting yoga practitioners for everything from social media accounts to clothing line catalogs.” He has a unique approach to creating his shots, and you can enjoy them here.

Esther Mbabazi, armed with her Fujifilm camera, began documenting women in Uganda and the severe struggles they face during and after childbirth. Because many women don’t have access to proper health care, local women step in to assist with the birth. But Uganda is outlawing this practice which raises several questions about the future health of women in rural areas. You can read all about this moving photography project here.

Yekaterina Gyadu is a young photographer currently based in New York. She shoots portrait, documentary, and wedding photography–all at a high standard. We talked about how her African and Russian heritage made her the artist she is today. Gyadu also shares what it’s like grinding as a freelancer and how she started to build up her client portfolio. Play the video or read about it here.

Polly Irungu is the founder of Black Women Photographers (BWP). She started the organization on her 26th birthday, and since then, she’s built a home for talented black female photographers. As well as being a space to get bookings, BWP also sets up photo walks and offers thousands of dollars in working grants to up-and-coming photographers. She shares the full story in the video, or you can read about it here.

Vanessa Charlot was deemed so talented that her teacher gifted her a Leica when she was young. They were right to believe in her, as since then, Charlot has had a glittering career. Now, she teaches students photography and does it in a unique way that allows them to blend the written word with their photographs. Listen to all she has to say in the video or read about it here.

The Phoblographer remains committed to uplifting the voices of the best black photographers in our industry. Show these photographers some love by connecting with them online.