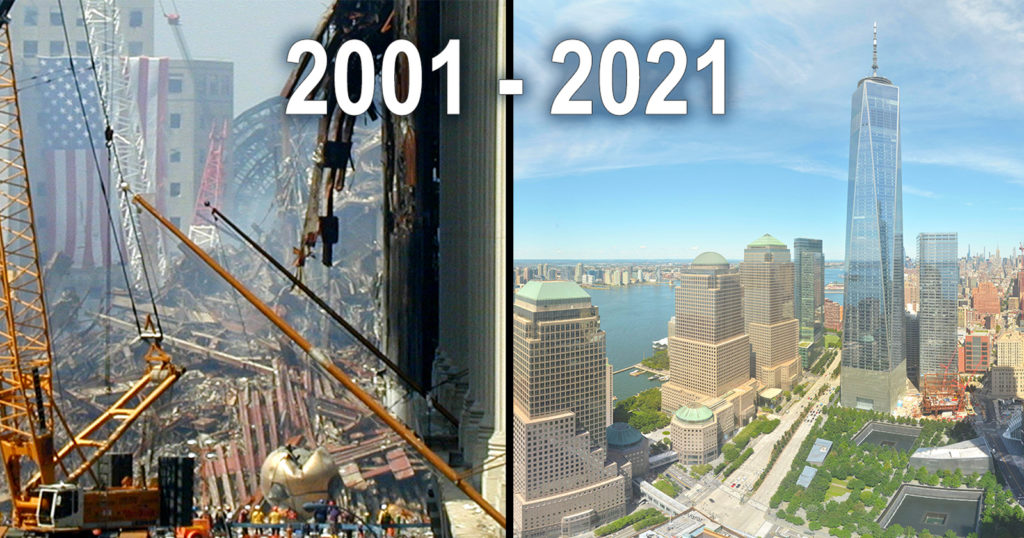 Earthcam, one of the leaders in long-term timelapse camera systems, has released a new timelapse film that documents the last two decades of the rescue, recovery, and rebuild of New York’s World Trade Center.

The September 11 attacks, often simply referred to as 9/11, were a series of four coordinated terrorist attacks againt the United States that took place on September 11, 2001. Two hijacked airplanes were crashed into the World Trade Center twin towers, which eventually led to their collapse within an hour and forty-two minutes after impact. The attacks resulted in the deaths of 2,996 people and injuries to more than 6,000 others.

After the site was cleared, a new World Trade Center tower was planned and constructed on the same site as the original twin towers and opened on November 3, 2014.

The above timelapse film is the longest-running timelapse project in Earthcam’s history and includes footage that the company says has never been seen before and spans the last two decades. Earthcam previously released a 10-year timelapse that showed the construction of the September 11 Memorial and Museum in 2014.

EarthCam says that it has been on site since 2001 when its CEO and Founder, Brian Cury, installed a webcam just days after the attacks to webcast the rescue mission to the families of the missing.

The company says that as recovery became rebuilding, it worked on developing new robotic camera technology that it says was necessary to document the 16-acre site in the highest resolution possible.

“This is an emotional milestone for EarthCam, as the history of the company has been so intertwined with this site.” said Brian Cury, CEO and Founder of EarthCam, “We’re grateful to so many partners, friends, and to the extraordinarilyy dedicated team at EarthCam whose innovation drove this process for 20 years to deliver this historic record for the world.”

From that point forward, every few minutes for the next 20 years, Earthcam systems regularly captured photos and panoramic images of the area and the transformation of downtown Manhatten from over 100 viewing angles. The company says that the finished project required the capture of over 13.3 million photos.

All of those photos in addition to the original camera that Cury set in place in 2001 have been donated to the National September 11 Memorial and Museum.

“We appreciate EarthCam’s unprecedented contribution of 20 years of historic images, which have meticulously recorded the rebuilding that transformed this sacred space,” 9/11 Memorial President and CEO Alice M. Greenwald says, “This creative time-lapse both honors the legacy of those who were killed and embodies hope for the future, as we see these remarkable new structures that surround the Memorial as evidence of lower Manhattan’s resilience and renewal.”